Often pro audio products get written off by consumers because of the "pro" part. However, products like the Focurite iTrack Solo audio interface and headphone amp can work for everyday use. And well. 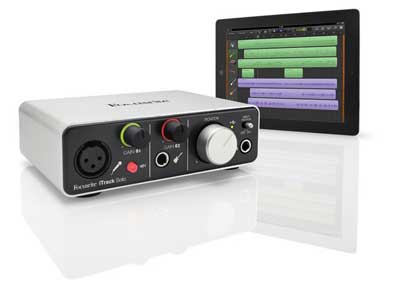 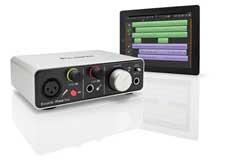 For years, Apple has been heralded as an innovator, with products that often launched entire market sectors that didn’t exist prior to their arrival on the scene. An example of this can be seen in the booming AirPlay marketplace, as mainstream and boutique manufacturers alike try to cash in on Apple’s proprietary wireless music capability. Apple has even put its stamp upon the pro audio marketplace, though I find its bigger achievement in that arena is in how its products have made it possible to bridge two worlds, consumer and professional. Case in point: the Focusrite iTrack Solo reviewed here. On the surface, the iTrack Solo appears to be an entirely professional audio device, but on closer inspection, it has a number of features that many audiophiles and home theater enthusiasts might find useful, such as iPad and computer connectivity and a rather nice-sounding headphone amp. But I’m getting ahead of myself.

The iTrack Solo is a small studio recording and monitoring device that retails for the paltry sum of $199, though many online and brick and mortar dealers have it listed for far lower. Focusrite is a U.K. company that is beginning to appear here in the States. As I mentioned, it is mostly focused on the pro audio markets, though some of its products, like the iTrack Solo, have definite consumer applications. The iTrack Solo is a silver aluminum-clad device, measuring six inches in width by four inches in depth and just under two inches in height. It’s hefty at a whole pound. The front of the iTrack Solo features an XLR microphone input, complete with its own gain control, followed by a one-quarter-inch unbalanced instrument input, which also has its own gain control. Along the far right side of the iTrack Solo, you’ll find a large monitor volume knob, as well as a direct monitor switch and a one-quarter-inch headphone jack. Around back, there are two RCA-style audio outputs, a USB 2.0 port for input and power, and a Device Link port to facilitate connections to Apple devices, specifically the Apple iPad. If you’re plugging the iTrack Solo into your PC or Apple computer, it draws power from your computer’s USB input. Otherwise, a USB to AC adaptor (included) is required.

The original intent behind the iTrack Solo is to serve as a portable recording studio of sorts. By connecting your iPad to the rear panel and a microphone and instrument to the front, you can essentially record direct to an app like Apple’s Garageband. For musicians, this is a huge plus, as it gives the artist the ability to essentially record on the go, for not a lot of money. For me, the iTrack Solo serves as a potentially higher-end, though still affordable, podcasting solution, something I’m going to be doing more of here in the not too distant future. For the audiophile or home theater enthusiast, the iTrack Solo can also double as a fairly straightforward Apple-friendly headphone amp, which is primarily how I utilized it for this particular review.

Since I have both Apple and Windows-based computers, I was able to test the iTrack Solo on both platforms. When connecting to a Mac computer (or Apple device), the iTrack Solo is the epitome of plug-n-play. Both power and input are dealt with via the iTrack Solo’s USB cable when connecting to a computer. When plugging into an iDevice like an iPad, you must use the included USB to AC adaptor in order to power the iTrack Solo. PC users will have to download the appropriate driver software (free) from Focusrite’s website before you’ll be able to utilize its functionality. Focusrite includes a suite of plug-ins with purchase, though they’re aimed at professional users and not home theater enthusiasts. Once everything is connected, you simply direct your PC or Mac to use the iTrack Solo over other connected audio devices, plug in your favorite headphones, and away you go. It’s that simple. You can even use the direct monitor switch to hear how the iTrack Solo is affecting your music, as opposed to having it operate passively.

In terms of sound quality, I found the iTrack Solo to be a welcome improvement over simply jacking my headphones directly into my PC or Mac laptop. There is a noticeable boost in SPL when listening through the iTrack Solo, resulting in a far more open, dynamic and effortless sound. I can’t say that bass plunged deeper nor that highs sparkled more brightly, but it was as if someone took Windex to the glass between you and the music. The change was never detrimental to the experience, nor did it change the house sound of the various headphones I used in my tests. I’m not what you’d call a headphone aficionado, but I’ve listened to more than my fair share of cans and even own a dozen or so pairs. In every instance, I found the inclusion of the iTrack Solo to be worthwhile. I especially liked that it enabled me to put my headphone jack and control on my desk rather than down by my knees when connecting to my tower computers’ headphone jack. Lastly, when connecting to an iDevice, the improvements heard when using a computer were also present.

Read about the high points and low points of the iTrack Solo on Page 2. 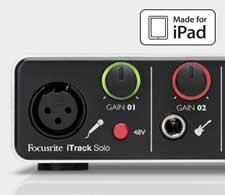 High Points
• The iTrack Solo’s build quality and design is
first-rate and robust enough to survive some pretty rough and tumble
treatment, a trademark of most pro equipment.
• For those who fancy
themselves amateur musicians or talk show hosts, the iTrack Solo
possesses added functionality over regular purpose-built headphone amps.

• The iTrack Solo’s ability to interface with Apple products so
seamlessly is a huge bonus for fans of iTunes and other iApplications.
•
The iTrack Solo’s headphone performance was a nice improvement,
resulting in a clear, more effortless sound on all music. I’m not
certain if the iTrack Solo can power tricky headphones like Stax, but it
does a great job with most common cans, such as my Bowers & Wilkins
P3 and my AKG k240 Studios.

Low Points
•
For some, the added functionality of the iTrack Solo is simply going to
go to waste but, again, audiophiles and home theater enthusiasts are
not the iTrack Solo’s target market, even if it will work for our
purposes.
• I wish the iTrack Solo had a pair of RCA inputs on the back, for it could then serve as a simple preamp, too.

Competition and Comparison
Headphones
and headphone amplifiers are becoming very hot commodities nowadays.
With budgets being as tight as they are and living space at a premium,
more and more people are turning to headphones. Also, the youth of
America is pretty much infatuated with them. Some notable manufacturers
in the consumer space to consider when looking at the Focusrite iTrack
Solo are NuForce, Benchmark (also a pro audio company), Headroom and
HiFiMan. For more on these products and others like them, please visit
Home Theater Review’s Headphone Review page.

Conclusion
While
I know the Focusrite iTrack Solo is technically a pro audio product, it
is a pro audio product that also happens to work in everyday consumer
applications. With a street price well below $200, the iTrack Solo is a
wonderful headphone amp/solution for today’s Apple-centric music lover
and/or amateur musician. While I’m sure many who read this and may also
purchase the iTrack Solo will not use all of the features and
functionality available to them via the small device, as a headphone
amp, it’s still a pretty solid value. Those with more esoteric
headphones like Stax will likely have to look elsewhere, but those of us
with more mainstream cans will be well served by the iTrack Solo.
Definitely worth a look.