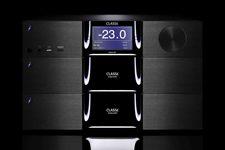 Classé's new Sigma Series features three products, beginning with the 7.1-channel Sigma SSP pre/pro ($5,000) that includes HDMI video switching, balanced and single-ended inputs, and USB/Ethernet ports. The two-channel AMP2 and five-channel AMP5 amplifiers (how's that for straightforward naming?) are Class D amps that will carry an MSRP of $3,500 and $5,000, respectively.

From Classé
Classé has announced the availability of a new series of components called Sigma, featuring a 7.1-channel Surround Sound Preamp/Processor called Sigma SSP and two amplifiers, the AMP2 and AMP5, rated at 2x200W and 5x200W into eight ohms, respectively.

"High-end is about passion, discovery, experience and technical exploration. It's not just who can make the most expensive things." said Dave Nauber, President of Classé. "Making more affordable products that are truly high-end is a greater challenge, which is why there is a gap in the market between offerings from the mass-market CE companies and the high-end brands. We chose to exploit our cost advantage as part of the B&W Group to fill this void with some exceptional new products."

The Sigma SSP has been optimized as a high-performance stereo preamp/processor with video switching, multichannel processing, and bass management included. Connections for USB and Ethernet streaming augment the basic HDMI, coax, and optical digital inputs. Balanced and single-ended analog inputs, including an optional phono stage, make the Sigma SSP a truly versatile preamp/processor.

According to Classé, the amplifier models are derived from their breakthrough Delta Series CA-D200; a Class D topology that addresses the problem of dead-band-time - the time when both halves of the amplifier are off - once thought to be the Achilles' heel of Class D designs. The Classé solution achieves an astonishingly low three-nanosecond dead-band-time, dramatically lowering distortion and enabling numerous other design advantages. The result is said to be superbly musical sonic performance along with other class D benefits like small size, low heat dissipation and high efficiency.

"Our goals in designing the Sigma series were to deliver true, high performance for the audiophile, offer versatile connectivity to accommodate a wide range of sources, bundle it with a host of performance-oriented features and package it in a compact and affordable chassis." said Nauber. "We have done all that and more. With their efficient use of power, the Sigma Series designs generate less heat and are more eco-friendly than other conventional designs."

The Classé Sigma Series is available in October.