Front Projection: Still the Best Value in the Big-Screen Biz 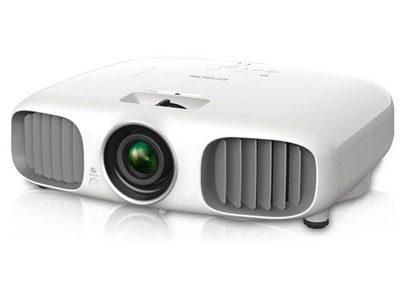 Front Projection: Still the Best Value in the Big-Screen Biz

Television manufacturers continue to make and market bigger and bigger screens. However, while an 80-inch television is an easy and impressive-looking solution, it is still not the best solution.

Companies like Sharp and Mitsubishi now offer bigger-screen TVs at a better value than ever before, but there’s still no beating front projection when it comes to the “screen size per dollar” ratio. The entry-level projector market is currently loaded with compelling options priced under $2,000. So, if your heart screams for big-screen theater but your wallet begs for restraint, maybe you should take a closer look at front projection.

A number of budget projectors have recently earned high marks from our publication and other major sites. Here are a few that come to mind: Optoma’s HD33, Epson’s Home Cinema 3010, BenQ’s EP5920, Panasonic’s PT-AR100U, and Acer’s H9500BD. In Projector Central’s current list of the best home theater projectors, 11 of the top 17 are priced under $2,000. A few of them are priced under $1,000. Mate one of these models with a value-oriented screen, and you’ll soon be enjoying a large-screen image for less than $2,500. For instance, the 100-inch version of Elite Screen’s Sable fixed-frame screen is currently available through Amazon for about $230.

As with any display technology, front projection carries its own set of pros and cons. As I just pointed out, price and screen size are two big pluses, especially in the entry-level market. Let’s talk about some other high points and challenges to keep in mind, should you choose to go the budget route.

When most people think of front projection, they picture a completely dark room. In days past, one of the major hindrances to a front-projection system was the need for total light control. That may work for movie night, but most of us prefer a little light for casual TV watching, and most of us lack a dedicated theater room with blackout shades. In today’s landscape, total light control is no longer mandatory, and that’s especially true in the budget realm. Manufacturers understand that the people shopping in the value category generally aren’t hard-core theaterphiles–they’re willing to sacrifice some black-level performance to get better light output and a more versatile projector. The budget models I listed above have brightness specs in the 1,800- to 2,800-lumen range (not exactly three-chip DLP numbers, but ample for a modest-sized home entertainment setup).

I attribute some of this increase in brightness to 3D. Whether you like 3D or not, the rise of the active 3D projector has forced manufacturers to crank up the light output o help accommodate the light loss caused by the active-shutter glasses. This pays dividends in the 2D arena, where you can enjoy a better-saturated image in a brighter space without necessarily having to use a widely inaccurate Dynamic or Vivid picture mode. For even better bright-room performance, consider using an ambient-light-rejecting screen material, such as Screen Innovations’ Black Diamond, Vutec’s SilverStar, or dnp’s Supernova. This type of screen will increase the system cost compared with a basic, value-oriented screen; for instance, the least expensive Black Diamond screen is a 100-inch fixed-frame screen for $2,699. Still, when mated with a $2,000 projector, that’s a 100-inch display system for $4,699.

As I alluded to above, lower-priced projectors generally don’t produce the kind of deep blacks you can get with a better-performing mid- to high-end model. So, when you watch movies in a completely dark room, you won’t get that extra level of depth and saturation with darker film sources. A budget projector may omit the auto iris that improves dynamic contrast; if it does have an auto iris, it may not perform as quickly or as quietly as those employed in higher-performance models. However, if we’re talking about a projector’s black-level performance compared with a larger-screen TV, consider this: LCD flat panels and DLP rear pros aren’t exactly known for their black levels, either. A value-oriented large-screen LCD probably doesn’t offer LED local dimming to improve black-level performance. If it’s an edge-lit LED, uniformity problems are also likely, and viewing angle will be average at best.

Budget projectors will often omit the higher 120-/240-Hz refresh rate and de-judder “smoothing” technology offered in step-up models; so, if you’re especially sensitive to motion blur or bothered by film judder, you might want to step up to the mid-level range.

In the features realm, one thing that might get sacrificed in the entry-level projection category is setup flexibility; the lower the price, the more limited the setup tools might be. The projector may have less zoom and limited or no lens shifting, which makes it more difficult to place the image on the screen (this tends to be more true for budget DLP projectors than 3LCD models). You’ll seldom see the advanced lens-memory settings offered in higher-end models. Not surprisingly, these models don’t come with multiple lens options, and they might also omit the anamorphic mode to mate the projector with an anamorphic lens for use with a 2.35:1 screen. The zoom/focus tools are generally manual, not motorized.

In the past, you always had to add external speakers to the front-projection equation, but some budget models now offer integrated speakers and sometimes even an iPod/iPad dock–including Epson’s Home Cinema 3010, Epson’s MegaPlex Series, the BenQ EP5920, and the Optoma Neo-i pico projector. Obviously these speakers aren’t ideal for the full home theater experience, but they usually get the job done as well as a flat-panel TV’
s tiny speakers for casual viewing.

If you’re worried about the logistics of having to run cables across the room, consider a model like the Epson Home Cinema 3010e, which has built-in WirelessHD capability. (You can also buy a standalone wireless-HDMI product like the DVDO Air or IOGear GW3DHDKIT for under $400.), although this can be easily and cheaply added via a standalone box.

Admittedly, the front-projection route isn’t quite as plug-and-play as having an 80-inch TV delivered to your doorstep. It requires more research and legwork to assemble the various elements you might require. That diligence will be rewarded, though, when you see the great-looking big-screen image on your wall and the excess cash in your bank account.