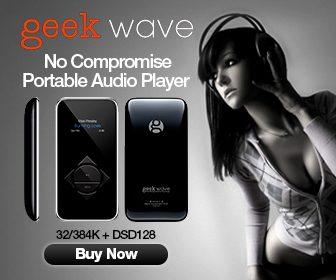 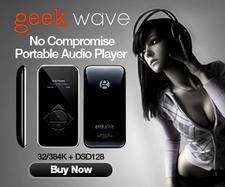 As hi-res audio slowly builds steam (between our own musings and Neil Young’s attempts) more hi-res audio players enter the market. A new contender is the Geek Wave. With a price starting at $299, what really sets the Geek Wave aparts is that its the only portable player that is 32bit / 384 kHz PCM capable.

LH Labs introduced its first product design into the portable audio player market today with its feature-friendly, sound-quality-centered Geek Wave. By incorporating the best ideas from the hundreds of different players on the market, and then combining them with the high-performance features that LH Labs is known for, they’ve managed to create a no-compromise, high-performance portable music player that both the audiophile community and casual music listener are sure to be talking about. Geek Wave pricing starts at just $299.

Geek Wave is the only portable 32bit / 384 kHz PCM capable, native DSD player in the world. Meaning, it can play just about any type of music file from MP3’s all the way up to ultra high resolution DSD128 files. With its easy to manage user interface, Geek Wave gives you quick and easy access to the essentials: play, pause, next, and previous on the front panel. Buttons on the side allow you to turn it on and off quickly, and gives you access to the main menu. Geek Wave allows for easy drag and drop music management directly onto the device from your computer’s hard drive. With expandable storage up to 2TB, users will be hard pressed to fill up the Geek Wave’s music library.

One the biggest complaints against the iPod and many other portable music players is that they don’t have a replaceable battery. When the battery dies, the whole device dies with it, forcing users to pay for repair or simply scrap the whole device. Geek Wave has solved this longstanding issue by making their battery user-accessible. If the battery is low on charge or reaches the expected two year lifespan of the rechargeable lithium ion battery, Geek Wave user’s can simply swap in a new one. On top of the battery interchangeability, the 3100mAh battery has a continuous playback time of 10 hours.

With almost $2 Million dollars raised via crowd-funding in the past year, LH Labs has positioned itself as a manufacturer that incorporates their customers ideas, wish-lists and tech requests to provide the most appealing and high quality audio products available.