GoldenEar's popular and acclaimed Triton Series has a new member. The new Triton Five tower speaker joins the Triton Seven as a passive member of the Triton lineup, lacking the built-in powered subwoofers of the Triton One, Two, and Three.... 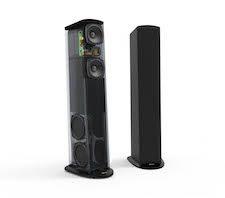 GoldenEar's popular and acclaimed Triton Series has a new member. The new Triton Five tower speaker joins the Triton Seven as a passive member of the Triton lineup, lacking the built-in powered subwoofers of the Triton One, Two, and Three. A larger version of the Seven, the Triton Five combines one HVFR tweeter with dual six-inch cast-basket mid/bass drivers and four eight-inch planar sub-bass radiators, and it has a rated frequency response of 26 Hz to 35 kHz. The Triton Five will cost $999 each and should be available in March.

From GoldenEar Technology
GoldenEar's Triton Towers have set new standards for high-end performance and value, winning innumerable major awards all around the world. The Triton One, Two and Three all incorporate built-in powered subwoofers. The Seven was the first Triton Tower without a built-in powered subwoofer. We are now pleased to introduce the Triton Five, a worthy step-up from the best-selling, double Product-of-the-Year winning Triton Seven, debuting at CES 2015.

The new Triton Five is a larger version of the Seven, with greater dynamic range and even deeper bass extension. In addition, several important refinements carried over from the Triton One development program result in even better imaging as well as a more sophisticated overall sonic presentation. Like the Seven, it achieves superbly deep, very impactful bass performance by combining advanced technology drivers with our highly evolved and sophisticated bass-loading technologies. And, as with all of our Triton Towers, the Triton Five is also ideal for use in two-channel systems of the highest quality, as well as complete multi-channel surround music and home theater systems.

The Five's unique cabinet shape is both acoustically purposeful as well as strikingly attractive. Its stylish rearward rake both aligns the driver array precisely to ear level at the listening position, as well as results in non-parallel front and rear baffles for better control of internal standing waves. And, of course, the non-parallel side cabinet walls and slanted top provide the same acoustical performance benefits, as well as looking great. The Five's precise and totally box-less imaging characteristics are further enhanced by the narrow front baffle, as well as the diffraction-less designer grille cloth sock which adds additional sheer damping to the cabinet. In addition, the beautifully sculpted piano-gloss black base adds significantly to the Five's dynamic stability.

Like the Triton One, Two, and Seven, the Five combines a D'Appolito Array of two high-definition bass/midrange drivers, which surround the same, now famous High Velocity Folded Ribbon Driver, used in the rest of the Tritons as well as all GoldenEar loudspeakers. The HVFR tweeter functions by pressurizing the air, rather than pushing and pulling it, for much better impedance matching with the air. This results in superb extension combined with a silky smooth non-fatiguing character, which is both unique and extraordinary. The spiderleg cast-basket 6" bass/midrange drivers are based on the 6" driver originally developed at our Arnprior engineering facility, for the award-winning Aon 2. They have been specifically designed for an exceptionally long-throw in order to achieve tremendous dynamic range and extraordinarily deep bass response. In addition, their precisely curved cone combined with a specially formulated polypropylene cone material and a unique apical glue bonding technique delivers superb high-definition midrange clarity and presence.

Like the Triton One, the Five incorporates four side-mounted sub-bass radiators (two on each side, in an inertially balanced configuration) that are located down near the floor for optimum coupling to the room. This tremendous increase in infrasonic bass coupling area, relative to the Seven, along with the larger cabinet and larger drivers delivers low-distortion subwoofer quality bass from a sleek, attractively sized, passive speaker. And, of course, the same Frequency Dependent Damping bass loading technology developed for the Seven is also incorporated in the Five. Additionally, the Five utilizes our unique balanced crossover topology technology, first developed for the One, along with polypropylene capacitors, for ultra-high-resolution capability. Matching surrounds, height speakers for Atmos installations, and center channels are available.