GoldenEar Technology has announced second-generation versions of its popular Triton Two and Triton Three floorstanding speakers. The new Triton Two+ ($1,749 each) and the smaller Triton Three+ ($1,249 each) draw extensively on advancements that the company achieved during the development... 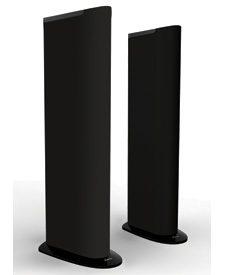 GoldenEar Technology has announced second-generation versions of its popular Triton Two and Triton Three floorstanding speakers. The new Triton Two+ ($1,749 each) and the smaller Triton Three+ ($1,249 each) draw extensively on advancements that the company achieved during the development of the flagship Triton One. Those advancements are detailed in the press release below. Like the Triton One, the Triton Two+ and Triton Three+ are three-way speakers that incorporate powered bass drivers. The new speakers will be available in February.

From GoldenEar
In 2010, GoldenEar Technology successfully launched itself into the marketplace with the introduction of the Triton Two, along with the SuperSats and ForceField powered subwoofers. The Triton Two was an evolution of everything Sandy Gross had designed, starting with his first creations at Polk Audio in the early 70s, through the breakthrough products that he and Don Givogue created for Definitive Technology, and then going beyond, as they knew that they must. The Triton Two and the follow-up Triton Three have been recipients of an extraordinary series of rave reviews and record-breaking sales. Then in 2014, Sandy and Don introduced the Triton One, a flagship tower that took all the concepts and technologies that they had pioneered with the earlier Tritons and moved them all up a notch, or two or three. These original basic concepts and technologies included GoldenEar’s superb High Velocity Folded Ribbon tweeter, a high-powered built-in powered subwoofer (incorporating quadratic active sub-bass drivers, inertially balanced sub-bass radiators, and a high-powered digital amplifier controlled by an in-house precisely programmed DSP), along with cast-basket upper bass/midrange drivers that incorporate a proprietary polypropylene cone, butyl rubber surround and multi-vaned phase plug, and a linear phase crossover. Thousands of man-hours went into the development of the Triton One and the refinement of everything that had come before. The sonic results speak for themselves, and the success of the Triton One is legend, having been compared with loudspeakers selling for ten times as much and then some. Not surprisingly, the Triton One has won virtually every major industry award, including numerous Speaker-of-the-Year and Product-of-the-Year awards from many of the world’s most prestigious and well respected audio publications.

Now, GoldenEar is pleased and proud to announce the second generation Triton Two and Three, the Triton Two+ and Triton Three+, which incorporate many of the new technologies and refinements developed for the One, along with the successful application of all of the additional experience that we have gained over the years and in the process. A successful loudspeaker design is much more than just the sum of both an excellent concept and the high quality parts incorporated in it. More importantly, it is the commitment to get it right, schedule be damned, and the knowledge and perseverance to execute this. In other words, making the effort and taking the time to get all the thousands of little details right, is the real key that makes the difference. Often extra cost is directly involved, but more often, the cost is in the time required and commitment to make it as good as possible. As we focused on the major development project to bring the original Triton Two and Triton Three up to Triton One’s sonic standards, this is the path that we took: examining the myriad of details, some very significant and some less so, in order to optimize as many as possible to bring us to our lofty goal. Simply put, listening will clearly and instantly reveal how well we have succeeded. Initial listening by noted critics and important reviewers has been exceedingly well received, and the consistent response has been surprise and shock at just how closely the sonic character and voicing of the new speakers approaches that of the One.

As is usual, much of the work was done at our extensive Arnprior engineering facility, utilizing our superb, full-size anechoic chamber, which is a duplicate of the world famous chamber at the NRC. Our chamber is actually fully suspended from its environment, so that the delicate measurements taken within it are not interfered with by outside disturbances and vibrations. Our engineering group feels strongly that only by using a chamber like this can you really measure, reveal and focus on many of the subtle but important points of a loudspeaker’s performance, and optimize them. It is worth noting that in the intervening time between the original Triton Two and Triton Three development project and the current one, we acquired powerful new development software, including a unique program for cones and surrounds. And additionally, we gained the services of a talented new senior acoustics development engineer, working under Bob Johnston, the head of engineering.

Some specific components that were changed include new upper bass/midrange drivers, which incorporate a new cone, surround, spider and voice coil. Additionally, a completely new balanced crossover with polypropylene capacitors, similar to the one developed for the Triton One, is incorporated. Many listeners don’t realize just how critical the crossover is to the sound of a loudspeaker. They often think that the drivers are the drivers, and that two speakers with the same drivers will sound basically alike. Not so… The crossover is like the conductor of an orchestra, telling each driver exactly when to come in and how loud to play. Our acoustic engineers spent countless hours trying subtle variations of crossover and DSP tuning in order to get the voicing exactly right. Additionally, the DSP low-level control unit is, in effect, new, as it has been completely reprogrammed. Sonically, both the Triton Three+ and Triton Two+ benefit from a significantly smoother, higher resolution, more open, more revealing and more highly detailed sound. In addition, there is dramatically more expansive imaging and tighter, faster, and better integrated bass. Remarkably, the Two+ ($1749 ea.) and Three+ ($1249ea.) now sonically very closely resemble the award-winning Triton One, as was our goal.

You may note that considerable time was spent during voicing of the products to fine tune the upper bass/midrange drivers, and their crossover to both the tweeter and especially the powered sub-bass section. The complex crossover to the powered bass section of both speakers, which critically controls both the phase and amplitude transition, was optimized by utilizing the DSP software to as closely match the Triton One in acoustic presentation and characteristics as possible. Special focus was placed on enhancing the soundstage and clarity to more closely match the Triton One. The DSP software was rewritten using the methodology developed with the Triton One project. This reduced the number of filter stages in the signal path, yet at the same time flattened the low frequency response, especially in the important sub-woofer/mid-range crossover area between 100 and 250 Hz, as well as in the lower bass and sub-bass regions.