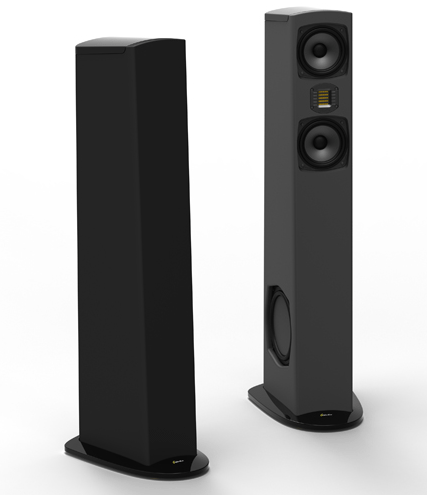 Audio Reviews, Equipment Reviews, Floorstanding Speaker Reviews
Published On: April 9, 2014
We May Earn From Some Purchases Via Affiliate Links

While evaluating the GoldenEar Triton 7 speakers, Dennis Burger decides that price is not a factor if a speaker moves you. 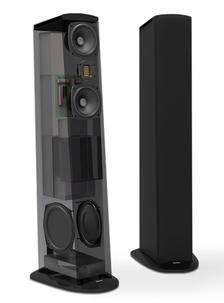 In the year or so since the 2013 International CES, two speaker demos in particular have haunted my memory as truly moving, ear-opening musical experiences. One was Wisdom Audio's behemoth LS4, a wall-mounted planar magnetic line array tipping the scales at 550 pounds and measuring 6.75 feet tall. The other? GoldenEar Technology's dainty, 30-pound Triton Seven, the littlest sibling in the company's Triton tower lineup. Both moved me in a way that a truly world-class speaker should. Both drew me in with startling detail, wonderful dynamics, and gorgeous soundstage delivery ... and I'm pretty sure I'm on record saying virtually exactly that somewhere in cyberspace at the time. What I didn't put together then - or, if I did, it has slipped my mind since - is the fact that the two loudspeakers that moved me most deeply in the hallowed halls of the Venetian Resort-Hotel-Casino last year differ in price by $78,600 (and two pennies, if you're counting) per pair.

Of course, I don't mean to entirely equate the $40,000 LS4 with the $699.99 Triton Seven in every respect. Each has its distinct target audience and its own ideal listening space, and the former is capable of delivering sound pressure levels that'll rip your face clean off your skull in a pretty sizeable room, whereas the Triton Seven is a more sensible solution for small- to mid-sized spaces.

The point of all this is that, if I can't help but compare a $700 speaker to a $40,000 one, I think it's safe to say that GoldenEar Technology founder and president Sandy Gross has attained his stated goal of bringing high-end performance down to prices that virtually any music lover can afford. The Triton Seven, of course, isn't the first speaker in GoldenEar's Triton tower speaker lineup. It follows the renowned Triton Two and Triton Three but, unlike previous Tritons (as well as the upcoming Triton One), the Seven is an entirely passive loudspeaker without powered subs. Instead, each cabinet relies on two side-firing eight-inch planar passive radiators to provide bass down to an impressive 29Hz, along with two 5.25-inch cast-basket mid/bass drivers and one of GoldenEar's High-Velocity Folded Ribbon tweeters (a variation on Oskar Heil's Air Motion Transformer. The latter, of course, is what gives the Triton Seven its distinctive, sparkling, distortion-free sound and is largely responsible for the fact that its voice is remarkably similar to that of previous (and upcoming) GoldenEar efforts. However, to focus purely on the folded tweeter would be to overlook so much of what makes this a truly incredible-sounding speaker from top to bottom.

Click on over to Page 2 for the High Points, Low Points, Competition and Comparison and Conclusion . . . 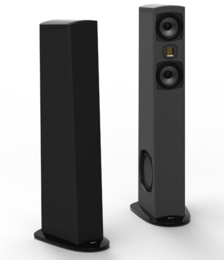 Let's start at the bottom. I began my evaluation of a pair of Triton Sevens connected with a pair of pre-terminated Straight Wire Encore II speaker cables to Parasound's A 5 preamp and A 23 amplifier. The cables' banana plugs definitely sped up the process of connecting the speakers, by the way, since its terminals are fairly low to the ground and pretty tightly packed, which I imagine would make bare-wire connections ever-so-slightly cumbersome. Either way, it became quickly apparent that no subwoofer was necessary to eke some truly excellent (although not necessarily foundation-rattling) low bass from the Triton Sevens; "Hyperballad," the second track from Björk's second post-Sugarcubes release, Post (Elektra), begins with some truly beastly 40- to 60Hz undulations that have been known to obliterate lesser subwoofers from time to time in the Burger household. The Triton Sevens handled even the deepest notes beautifully, effortlessly, with the utmost musicality and absolutely zero bloat.

Interestingly, and counter-intuitively, I also found the Triton Sevens to be among the least-fussy speakers I've auditioned in quite some time in terms of placement, despite their side-firing bass radiators. In my discussions with Sandy Gross leading up to the review, he was very specific about the sort of placement that would make him happiest: a very wide spread, with the speakers toed-in directly toward my listening position. So that's where I started, but truthfully the bass - indeed, every aspect of the Triton Sevens' aural output - sounded exceptional, no matter where I placed them in the room (within reason), no matter how close I sat to them (including a few unreasonable spots), and no matter if they were toed-in or pointed straight ahead. In the end, I found them just as satisfying as near-field speakers as I did when they were all the way on the other side of my home office. A good deal of that that is probably a result of their raked design, which aims the front-firing drivers slightly up and out into the room.

At any rate, ascending up the tower to its pair of 5.25-inch cast-basket mid/bass drivers, I found that, when I moved to more rocking fare like the Black Crowes, specifically "Descending" from the album Amorica (American Recordings), the system didn't quite have the slam that I strongly suspected the Triton Sevens should be capable of delivering (even with the addition of a sub), so I moved them from the Parasound setup to my Anthem D2v preamp and A5 amp in the main media room for some additional listening. With that move, I found the additional dynamic impact I was seeking. Even in pure two-channel mode, without the assistance of a subwoofer, these little guys rock pretty hard for speakers of their size. The only time I really found myself longing for a sub to crank the impact of the bass up a notch was when I turned to tracks like LEN's "Man of the Year" from You Can't Stop the Bum Rush (Sony), but it's a rare speaker of this size (much less this price point) that could keep up with that amount of hard-hitting bass without the help of a powered sub.

LEN - Man of the year 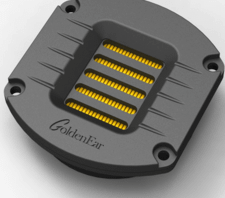 For all the talk of bass, though, it's hard to deny that the High-Velocity Folded Ribbon tweeter situated betwixt the Triton Seven's two mid/bass drivers is where the real heart and soul of the speaker lies. The HVFR tweeters give the speakers their incredible, silky smooth, distortion-free high-end sparkle, their fantastic imaging, and their uncanny three-dimensional soundstage capabilities. By now, I shouldn't be surprised by any GoldenEar speaker's ability to truly reach out into the room and hang various elements of a well-done music mix in the air, like ornaments on some invisible holiday tree, but the sound never fails to astound me. Every time I bring one of the company's new offerings into my home, I find myself discovering new little surprises in songs that I know by heart.

"Only Skin" from Joanna Newsom's Ys (Drag City) is a great example of this. Roughly six seconds into the track, just as Joanna's vocals kick in, her voice does this indescribably wonderful cracking, squawking, breaking thing, which most speakers - even truly fantastic ones - render as a sort of explosive singularity, a one-dimensional eruption from no particular place in space. Through the Triton Sevens, that vocal crack is delivered as an amazingly tiny little three-dimensional lightning strike of sound, ever-so-slightly forward from the track's droning harp strings. It's subtle, to be sure, but it's something I normally only pick up on with the finest planar magnetic headphones or a good pair of balanced-armature in-ear monitors.

There's no doubt that each set of the Triton Seven's drivers, individually, is more than capable of delivering deep, rich bass, a sumptuously neutral midrange, and a sparkling, distortion-free high end. However, perhaps more impressive is just how cohesively these drivers work together. The transition between bass, midrange, and treble is utterly seamless and, as such, the speaker sounds less like a collection of individual drivers and more like one unified, tonally balanced, and lifelike source of exceptional sound.

Comparison and Competition
The only speaker that comes immediately to mind as any sort of direct competitor to the GoldenEar Triton Seven is MartinLogan's excellent Motion 20, which sports that company's own variation on the air motion transformer, comes in at a similar price point ($749.95 each), and in many ways rivals or equals the Triton Seven's sparkling detail and excellent imaging. It also boasts a more traditional, high-gloss piano black cabinet and better binding posts with bi-amping capabilities. The Motion 20 does feature a rear-ported design, though, which makes it a little fussier in terms of placement. The Triton Seven has superior bass extension and smoother, more seamless integration between its various drivers.

Conclusion
As you may have picked up on in the introduction, I normally don't expend much effort thinking about the price of a speaker. If a $40,000 speaker moves me and draws me into the music emotionally and texturally, then I'm unlikely to blink at its sticker price - because, while there is a serious science to good speaker design, there's also an art to it. There's no doubt that, even at $699, the GoldenEar Technology Triton Seven nails the science in terms of speaker design, with its beautifully balanced frequency response, wide dispersion, exceedingly low distortion, and smooth transition between low, mid, and high frequencies, not to mention its startling imaging and soundstage capabilities. But as much as I love quantification, specs and objective measurements can't tell you the whole story about a speaker and, although I'm not one to believe in magic, when you're kicked back in the dark with a pair of these little Tritons, soaking in the nuanced textures of Pink Floyd's "Shine on You Crazy Diamond" in high-resolution, it certainly sounds like there's a little bit of voodoo involved. While I'm thrilled that GoldenEar Technology has brought such an involving listening experience down to such an attainable level, I still find myself a bit shocked that they're willing to let go of such a stunning aural work of art for so little money.