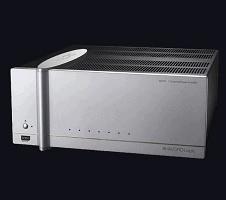 Halcro had some of the best reviewed amps in the audiophile world, and this Australian company looks to keep that going with the 7-channel MC70. It's got an impressive 350 watts per channel, and rings up at $7,000. 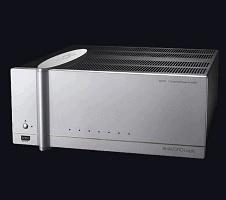 In their laid-back, oaky-Chardonnay-in-their-hand, Australian way of looking at the world of audiophile electronics, the executives at Halcro never, ever get sick of talking about the famous review of their reference power amplifier that once called it, “The Best Amplifier In the World.” While you need to be at least a fractional owner of a Gulfstream G450 and sporting an American Express Centurion (black) card to even consider their big-boy audiophile monoblock amplifiers, surround sound and home theater enthusiasts have a much more reasonable yet equally lust-worthy amplifier option from Halcro, the M70.

The Halcro M70 is a seven-channel, one-chassis 58-pound power amplifier that looks like the company hired Giorgio Armani to do the industrial design. This 350-watts-per-channel amplifier comes loaded with enough power to drive even the most demanding audiophile speakers with the lowest of efficiencies and/or oddball impedances. If you have a Halcro MC70, you are set, no matter what type of speakers you would like to drive to heavenly levels. The sound of a Halcro MC 70 has that airy high end that you expect from a topnotch solid state amp that also mildly hints at the warmth of tubes in the highs and mids, yet unlike a tube amp, a Halcro MC70 has the low-end spank to light up Dark Side of the Moon on 5.1 SACD or drop some serious U-571 depth charges from Blu-ray. At $7,000, Halcro isn’t suggesting that you have to make sacrifices. They are offering you everything that an audiophile amp has to offer across seven channels of Australian-made power.

Read The High Points, The Low Points and The Conclusion on Page 2

High Points
• 350 watts per channel is a ton of power. The Halcro MC70 can get you where you want to be, no matter how loud or how demanding your speakers are. If you need it louder (while still VERY MUCH in control), then perhaps you need your hearing checked.
• The fit and finish of the Halcro MC70 is just beautiful. This is a fine audio component and it shows you what you invested in every time you look at your rack. By the way, the MC70 looks even better in custom installations that feature the amp built into, say, a Middle Atlantic rack.
• Halcro’s customer support is second to none in the specialty audio/video business. I would bet an MC70 would never break, but if it did, they would treat you better than Patek Philippe would when sending in your product. At Halcro, the customer is a rock star, even if you can’t play a lick of guitar or when singing you can’t find a tune with radar.

Low Points
• Heat can be an issue with the Halcro MC70, as you might expect with a 350-watts-per-channel seven-channel power amp. I wouldn’t stack any gear on top of an MC70 and would make sure to have plenty of breathing room for the amp. Even better yet, if you can simply rig fan cooling for a MC70, you are going to be set.

Conclusion
The Halcro MC70 is one of the best-sounding, most exotic and high-performance seven-channel amplifiers money can buy. It has supermodel good looks, with purebred performance to back them up. At $7,000, there are without question less expensive ways to power seven speakers. However, even considering the price, the Halcro MC70 is a high-end audio value when you factor in everything you get for the price.

You'll automatically be entered in the HTR Sweepstakes, and get the hottest audio deals directly in your inbox.
Subscribe
Connect withD
Login
Connect withD
1 Comment
Oldest
Newest Most Voted
Inline Feedbacks
View all comments
Author
Jerry Del Colliano
HomeTheaterReview Product Rating
Value:
Performance:
Overall Rating:
When you buy through links on our site, we may earn an affiliate commission. Your support is greatly appreciated!
This is the static ad content. This is just a placeholder for now to get things styled.
Visit Website