With the news that Guardians of the Galaxy Vol. 2 will be available on Ultra HD Blu-ray disc, we see that Disney has finally lined up with the other major studios in embracing the higher-resolution format. 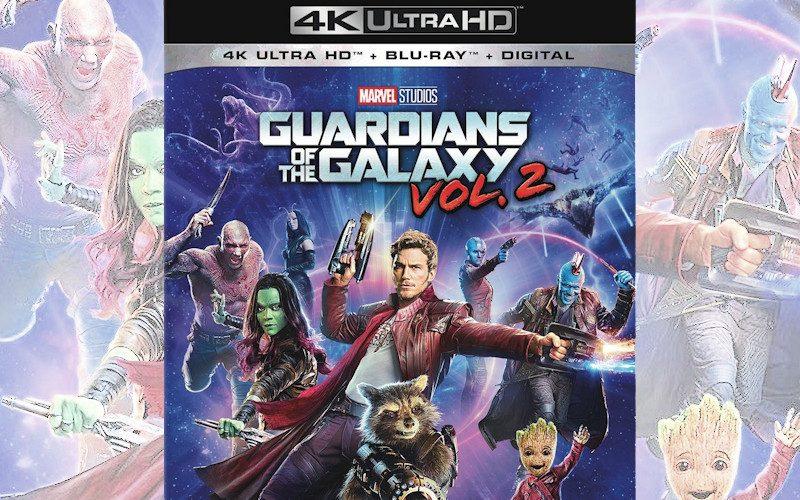 In case you haven't already heard, Guardians of the Galaxy Vol. 2 will be the first Disney film released in the Ultra HD Blu-ray format on August 22, 2017. That's right, the last major-studio holdout has finally thrown its hat into the Ultra HD Blu-ray ring. Pretty big news, eh?

How did people first learn about this major development in the company's home video strategy? Not from Disney. Speculation has been building for over a month, since The Digital Bits published a report in early June suggesting that Disney might add UHD support before year's end. On July 4, the Marvel Cinematic Universe Facebook page posted a photo of a promotional poster (see below), with the tag "GUARDIANS OF THE GALAXY VOL. 2 set for release on 4K Ultra HD, Blu-ray and DVD on August 22!" High Def Digest jumped on this news immediately. Then, on July 5, director James Gunn confirmed it on his own Facebook page with the following statement:

"Yes, it's true, & I am UNBELIEVABLY EXCITED to announce that, after a couple of years of me begging and pleading, Guardians of the Galaxy Vol. 2 will be coming to home video in 4K Ultra HD. It will be the FIRST Disney release to be released this way.

4K Ultra HD is almost certainly the best way you can see this movie at home--with more definition and the most vibrant colors possible on your home screen, and with the brightest brights and the blackest blacks. A being composed of light truly appears to be a being composed of light! This version is a roiling cinematic river of beauty and I've taken hundreds of hours personally making it look the best it can. This is one of the reasons why LIGHT and COLOR are such important elements of Vol. 2's story, and why we screened the World Premiere in Los Angeles in essentially this format.

And yes for those of you asking, there will also be a 3D home release."

Last week, Disney confirmed the news, and the Ultra HD Blu-ray disc is now available for pre-order through Best Buy. This is fantastic news for fans of Ultra HD Blu-ray, especially the early adopters who have already banked on its success. The format has gotten off to a good start; reports say that early UHD disc sales outpaced the sale of Blu-ray discs in that format's infancy (although discs in general now face a lot more competition from the streaming services). Warner Brothers, Universal, Sony, 20th Century Fox, Paramount, and Lionsgate have all stepped up to the plate and are releasing their newest marquee titles in the format. Plus, many film classics have also arrived or are coming in the near future--including The Fifth Element, Blade Runner, the Harry Potter films, Close Encounters of the Third Kind, E.T., and The Godfather.

Through all this, though, Disney has remained on the sideline, waiting to see how everything played out. According to the Digital Bits story I mentioned above, the company was waiting for more robust adoption of Dolby Vision technology on the hardware side. That meant no Star Wars in UHD. No Marvel in UHD. No Disney or Pixar animation classics in UHD. Whatever gains Ultra HD Blu-ray has made thus far, it's awfully tough to declare a home video format a clear-cut success without the support of Disney behind it.

If Disney was waiting for more Dolby Vision support, then it certainly makes sense that the company is now ready to jump off the fence. Dolby Vision is having a big year, as we reported back at CES. We're seeing more Dolby Vision-enabled TVs from VIZIO, LG, Sony, TCL, and others. LG and Oppo have introduced DV-capable Ultra HD players, and Dolby Vision UHD Blu-ray discs are starting to arrive, beginning with Despicable Me 1 and 2 from Universal. [Editor's note: In the original version of this story, we said that Disney planned to include a Dolby Vision version on the Guardians UHD disc, but we have learned that the UHD disc will only be offered with HDR10. The 4K digital copy that disc owners can download will be available in both HDR10 and Dolby Vision.]

It remains to be seen how aggressive Disney will be in its UHD rollout of new and back-catalog titles. It sure would be nice to revisit The Force Awakens in UHD/HDR before a certain Star Wars film hits theaters this December, but for now let's just be thankful that Disney has taken the first step in embracing the new format.

Now that Disney has jumped off the fence, what are you waiting for?