Have You Attended a Listening Event Recently?

Have You Attended a Listening Event Recently? 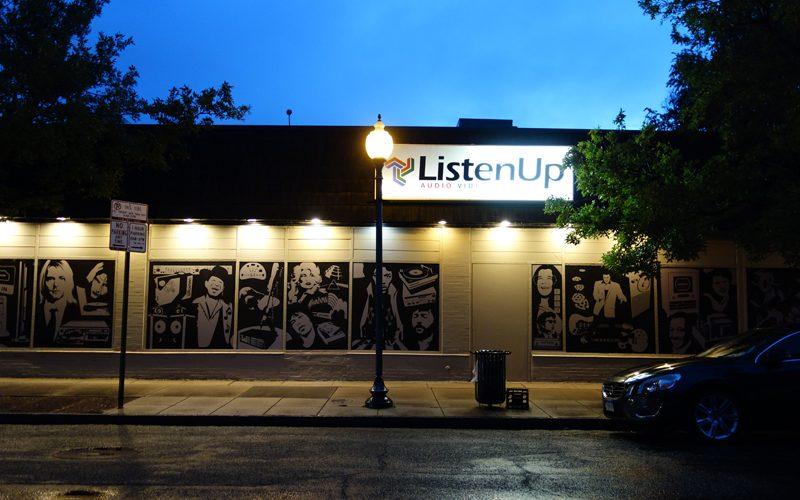 Back in July, I received an email invitation from ListenUp, a well-known Colorado-based AV retailer, to come hear a demonstration of GoldenEar's new Triton Reference loudspeaker, hosted by GoldenEar founder Sandy Gross. I got about a 10-minute demo of the Triton Reference during CES back in January, but those are hardly ideal conditions to really hear what a speaker can do. So, I figured, why not go check it out?

ListenUp has three Colorado locations--in Denver, Boulder, and Colorado Springs (there's also a store in Albuquerque, New Mexico). Over the course of three nights, they held the demo at each store, with Sandy personally hosting two of the three. I received the email because, a few years ago, I attended a similar listening event at the Boulder store and added my name to their mailing list. I decided to attend the first night in the original Denver store; and, on a Monday evening in early August, I made the 45-minute trek from my home into the heart of Denver, where ListenUp resides in a predominantly residential neighborhood, in an unassuming building that belies all the high-tech goodies within.

If you're not familiar with the Triton Reference, it's the latest addition to and the flagship piece within GoldenEar's Triton line. After debuting at CES, the speaker received many rave reviews (you can read Dennis Burger's review for us here), but it only just began shipping to dealers in late July, which left plenty of time in between for the buzz to build. One of the main reasons I went to the event was because I was curious to see how many people would show up.

Suffice to say, by everyone's metrics, the event was a huge success. The Denver store alone received about 75 RSVPs, and I'd estimate over 60 people actually showed up--that's pretty impressive for a rainy weeknight, right around rush hour, in the heart of summer. Sandy hosted two sessions, each roughly 45 minutes long, and both were standing room only. He discussed the company's goals in designing the new model and talked about the upgrades it offers over the Triton One, then he played a variety of music tracks that successfully showed off the different performance aspects of the speaker.

As I participated in evening's activities, I found myself wondering how many specialty AV retailers around the country host these types of events--and how often. Chris Havekost, the branch manager of the Denver location, told me that ListenUp tries to offer one listening event per month, which they advertise via email, direct mail, and through their social media channels. ListenUp also hosts an annual two-day event (usually in April) called MusicMatters that combines listening sessions with information seminars on the hot topics of the day. For instance, in this year's event, the topic was streaming music and the incorporation of hi-res audio and MQA.

Clearly ListenUp sees value in these events, despite the extra expense and effort that they require from the staff. I sincerely hope that other specialty AV stores around the country feel the same, as I believe these hands-on (or ears-on, if you will) events can play an invaluable role in our hobby--for two reasons.

First (and most obvious) is that they give people a chance to hear and see gear in action in a way that the big-boxers and the e-tailers just can't. You can read every rave review of the Triton Reference you want, but chances are you're gonna want to hear it for yourself before dropping $8,500 for the pair. Listening events offer a chance at an extended listening session with a product, usually with a company spokesman on hand to talk tech and answer any questions you might have. Consumer-oriented shows like Rocky Mountain Audio Fest and Axpona are a great way to get shorter demos of a lot of products, but again a crowded, noisy hotel room isn't necessarily ideal when you really want to dig in to a particularities of a certain product. And those shows rarely showcase video products, so where does the videophile turn when he or she wants to see the hottest new front projector in action? That's where the specialty AV retailer comes into play.

In this case, while the Triton Reference was certainly the focus of the evening, it wasn't the only product being demoed that night. The store features multiple dedicated theater rooms, complete with surround sound, front projection, seating, and control products. The rooms range from more modest designs built around SVS speakers and JVC projectors to high-end designs with Sony native 4K projection, Sonus faber speakers, McIntosh electronics, and Control4 in-wall/tabletop controllers. The store also has larger product rooms where different speaker lines, Ultra HD TVs, and electronics are on display, plus dedicated "experience" areas for headphones, Sonos and Bose wireless speakers, and streaming media players. Basically, there's a little something for everyone, and all of it was up and running on event night for people to experience in action at their own leisure.

Which brings me to second reason I like these types of events. They provide a completely pressure-free way to demo the latest and greatest AV gear. I've been covering this industry for many years. I know my way around the gear, but even I feel intimidated walking in the doors of a specialty AV retail store. I instantly feel the pressure to spend money. That pressure isn't necessarily coming from the salesperson (although sometimes it is). Some of it is just my own sense that asking a salesperson to answer my questions and cue up gear for an extended demo is just wasting his or her valuable time if I have no intention to buy on that particular day.

These special events provide a level of anonymity that an everyday visit to the store doesn't. I can blend in with the crowd, get the demos, and have my questions answered in a much more easygoing, casual environment. As Havekost explained to me, the primary goal of ListenUp's events isn't the immediate sale. The goal is community building--giving enthusiasts the chance to get together and providing a comfortable way for new people to get involved. Of course, there are familiar faces at every event, yet there's also excitement over the new faces.

Especially younger faces. Havekost acknowledged that one of the big challenges is getting younger people to attend the events. Of the 25 people who sat through my Triton Reference listening session, no one looked to be under 40; most looked to be over 50...and, not surprisingly, there was only one other woman in the group. As I exited the listening session and scanned the faces of those waiting to go in for the second session, I saw maybe three or four people who might be in their 30s. I guess that's better than nothing.

The store continues to try new ways to market to the younger audience. I remember, back in April, receiving a MusicMatters announcement through Z2 Entertainment, which handles the email lists for Fox Theater and Boulder Theater, two of the hottest live music venues in Boulder. Hopefully these efforts will pay off in the long run.

But now we'd like to hear from you. Has your local specialty AV retailer hosted a listening event lately? Did you go? What product(s) would inspire you to attend a local event? Let us know in the Comments section below.