Have You Been Suckered by a Fake Review? Join the Crowd

Have You Been Suckered by a Fake Review? Join the Crowd

Fake news is a-bubbling from gossip rags to the Oval Office. Facebook trolls and the Kremlin alike are constantly working to shape opinions of the unsuspecting. So why is it a surprise that rigged "user" reviews of consumer tech products... 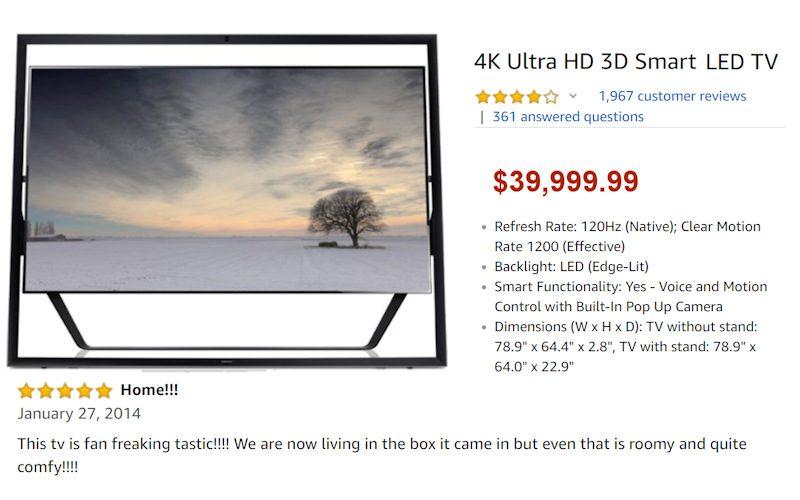 Fake news is a-bubbling from gossip rags to the Oval Office. Facebook trolls and the Kremlin alike are constantly working to shape opinions of the unsuspecting. So why is it a surprise that rigged "user" reviews of consumer tech products on Amazon are also becoming a scandal du jour, recently scoring a major exposé in the Washington Post. These revelations--if indeed they are revelations--challenge our faith in the "majority rules" judgements we peruse before buying the "best" noise reduction headphones or smart speaker.

Truth is, product makers have been working the system, inflating the grades and popularity of their goodies, for as long as pollsters have been counting noses. In my childhood, there were sordid stories of record companies and book publishers buying their way onto the best seller charts, earning extra buzz and actual sales in the process. How was it done (and maybe still is)? Employees fanned out to buy mass quantities of a new item. High profile merchants were paid off to exaggerate sales reports. Even big stars like Michael Jackson played that hype game, just as some celebrities now buy tens of thousands of fake Twitter followers, because they crave to be even bigger. And then there's the classic Broadway and movie fake ad scam brashly taking "real" quotes out of context. So, a critique that originally proclaimed "stupendous stupidity" becomes plain old "stupendous."

Now, in this digital-first age, assessed the Post (ironically owned by Amazon's Jeff Bezos), the most efficient way to stack the deck is by paying off homebodies to post effusive comments about your product. Or, for the sake of eliminating pesky rivals, by posting lowly one-star ratings of competitive products. Lured into one of the "Amazon Review Clubs" networking on Facebook, participants strike a bargain to buy an item, knowing they'll then be reimbursed after posting a review. They also get to keep or re-sell the gadget and earn a $5 or $10 gift card in the process.

Why is this so important? Me-too makers of gadgets--many operating in China--are desperate to gain any advantage and increase their visibility. Multiple purchases and posted reviews weigh heavy in product placement on the Amazon sales site and more so in our decision making as shoppers. A couple years ago, the website conversion rate optimization company Invesp calculated that 90 percent of consumers read online reviews before visiting a business. And 88 percent of them trust online reviews just as much as personal recommendations. An almost-as-steep 72 percent of consumers only take positive action after reading a positive review.

Lord knows, I'm one of them. Recently in need of a more sophisticated HDMI switch to juggle connections of video devices to an older, under-jacked bedroom TV and Sonos soundbar, I spent an entire afternoon and evening doing research online at America's deepest product warehouse and purveyor. But with "Sponsored" products, best sellers, and most often searched-for models given priority, it wasn't until delving 120 items and ten pages deep that I found the best HDMI switch for me. And then only because Amazon, suddenly "inspired by your views," decided to show me the newest and better reviewed version of the FosPower 5x1 HDMI Switch (Ultra HD 4K and 2K) with HDMI Audio Extractor (Don't buy that, please. Keep reading). That is, a switcher box capable of juggling up to five HDMI-connected devices while also splitting off and spitting out a separate optical digital signal from each, making it a whole lot easier to feed audio to my Sonos soundbar, which has just one optical audio in. (A design shortcoming about to be corrected in a new voice-activated and HDMI-input connectible Sonos Beam announced in June.)

Even with the FosPower, Amazon user reviews were all over the place--some praising it as "awesome" and "great switch," while others dismissed it as "junk," warning "buyer beware." Several in the latter category suggested the box wouldn't pass signals from their newer gear, a problem that might be fixed by just upgrading connector cables to variants labeled "HDMI Premium Certified."

More concerning to me were one-star dump jobs saying the product suddenly stopped working after four months. While there might be truth here--a prior HDMI switch finked out on me after two years--the revelations about reviewer rigging have made me extra cynical. If I wanted to steer somebody away from a four- or five star-rated product, I'd counter "Yeah, but then the thing died on me."

Ironically, there was a period in the latter 1990s when Amazon paid me to review tech products for them. I connected through an editor pal who'd previously given me work at Audio Video Interiors magazine (RIP). He was now helping to jumpstart Amazon's leap from discount book specialist into consumer everything, starting off with home electronics. My gig was mostly to review DVD players, then a hot new thing. Amazon needed my copy to serve as the core item description, because they weren't getting any marketing help from manufacturers. Brands like Sony, Toshiba, JVC, and Pioneer were protecting their dealer base by refusing to sell goods to Amazon. So as a work-around, Amazon was acquiring the DVD players from middle men--so-called "trans-shippers" who were authorized to buy an item in bulk then resell it in smaller quantities to mom and pop stores. But not to this burgeoning new online competitor.

Nobody ever told me that my reviews for the site had to be all raves. But given their nature as product introductions, the features set took precedence, some positives were expected and any technical shortcomings I discovered might be edited down for "clarity."

What I took away from that experience and others as a product tester is that you shouldn't just read the "top positive review" and the "top critical review" posted on Amazon. You've gotta dig deep, take the time, do the homework. Weigh the findings with a jaundiced eye and a giant grain of salt, and read reviews from professional reviewers you know you can trust.

As is also happening now (it's claimed) at Facebook, Amazon will be working harder to find and eliminate fake news/reviews, reported the Post. The web merchant will crunch the algorithms better to spot pile-ons of similar comments and the recurring appearance of reviewers who couldn't possibly be testing forty products in a month.

Amazon recently changed a policy so "Top 500" album reviewers can no longer re-sell their free CD samples on the site. And participants in Amazon's Vine insiders gadget review program can no longer froth-on to earn lots-a free stuff without consequence. Sample-reselling on the site is likewise forbidden, and Amazon now requires Vine reviewers to file 1099 tax forms--acknowledging income and paying taxes--if they don't return items sent for review that total more than $600 in value in a year.

Yes, those "free" user reviews are often informative and helpful. But don't ever forget the classic warning: "Caveat emptor!" And for products that aren't reviewed here on HomeTheaterReview.com, keep an eye open to the recommendations of indie operations like Consumer Reports.

You'll automatically be entered in the HTR Sweepstakes, and get the hottest audio deals directly in your inbox.
Author
Jonathan Takiff
When you buy through links on our site, we may earn an affiliate commission. Your support is greatly appreciated!