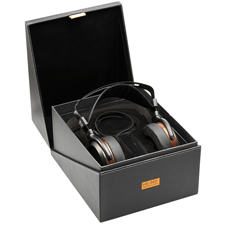 The words underneath HiFiMan's logotype proclaim "Innovating the art of listening." Founded by Dr. Fang Bien in 2007, HiFiMan's first commercial product, the HE-6, established a new product category for headphones--a reference planar design that was not based on powered electrostatic technology. The rather difficult-to-drive, power-hungry HE-6 also initiated the trend toward beefier, more powerful headphone amplifiers. Since 2007 HiFiMan has expanded its offerings to include portable players (the MH-901s), in-ear monitors (the RE-1000), and of course more full-sized headphones.

The $1,299 HE-6 is still in production, and HiFiMan has introduced two newer and even more expensive headphones: the $1,799 Edition X and the $2,999 HE1000. Unfortunately for many headphone enthusiasts, spending anything over $1,000 is not a budgetary option, so HiFiMan decided to produce the $899 HE-560, which promises to combine the sonic attributes of HiFiMan's flagship models in a less expensive and easier-to-drive model.

Product Description
The HiFiMan HE-560 is a full-sized, over-ear, open-baffle design that uses a single-sided stator technology. Its rated impedance is 45 ohms, and its sensitivity is 90 dB. The HE-560 has a removable cable. My review sample had a 3.5mm screw-on connection, but current production versions use 2.5mm mini-plugs, which are more robust, less prone to damage, and easier to connect. The HE-560 is the lightest full-sized headphone that HiFiMan has made yet. It weighs only 13.7 ounces, which is more than 30 percent lighter than any previous HiFiMan headphone. The principal reason it weighs less is that, instead of a dual-magnet array on both sides of its planar diaphragm, the HE-560 has only a single magnet array on the back of its diaphragm.

The HE-560 has gone through a couple of small design changes since its introduction. The most noticeable cosmetic change was the enclosure, which was originally made of wooden cups; however, they were prone to developing cracks, so the company replaced the wood with a laminate and completely redesigned the enclosures. The earpads were also changed both in composition and physical structure. The current earpads are softer with a slight wedge-shaped angle that puts the back of the headphone slightly farther away from your ears than the front. My review sample had the current earpads and cup design, but the older cable connection. The headband design has not changed. It depends on the spring tension of its metal section for side pressure. My preference would be for slightly less pressure.

It has become standard practice for "premium" headphones to arrive in "premium" packaging, which in the HE-560's case involves a large wooden presentation case with a slide-off, metal-covered top. My review sample's case weighed substantially more than the headphones inside it and was suitable for little else besides taking up space on a shelf. While it is vitally important that headphones arrive at their final destination intact and present a premium image, the HiFiMan HE-560 wooden box strikes me as overkill. I suspect that many owners would have preferred a nice hard-sided portable travel case.

Ergonomic Impressions
Although the HE-560 is the lightest full-sized headphone that HiFiMan has ever produced, it is not a "universal" headphone that can be driven by anything with a headphone output. It's not as power hungry as the original HE-6, but the HE-560 is still only 90-dB efficient with 350 ohms of impedance, which means if you want to use it with your iPhone or Android smartphone, the results will be dynamically underwhelming unless you enlist the help of an outboard headphone amplifier. The simple fact is that the HE-560 needs power to perform at its optimum level.

During my review, I connected the HE-560 to the stock single-ended cable, as well as a Moon Audio Silver Dragon V3 balanced headphone cable. The players and DACs that mated successfully with the HE-560 included the NuPrime DAC-10H, Oppo HA-1, Sony NW-ZX2, Astell & Kern AK Jr, Astell & Kern AK240, Calyx M, and Sony PHA-2. All but the AK Jr had some gain left in reserve when I played tracks at my preferred maximum volume level. With some headphone amplifiers, such as the NuPrime DAC-10H, the balanced connection's greater voltage swings resulted in a more dynamically unfettered presentation. With other balanced connections, such as on the Moon Audio Dragon Inspire IHA-1 headphone amplifier, I heard no difference over the single-ended connection, but in this case both connections had the same voltage output capabilities.

Given the HE-560's lower efficiency and open-baffle design that offers no isolation from outside noise (or prevents your music from disturbing others), I suspect that the HE-560 will be used primarily as a stay-at-home headphone for long listening sessions. Personally I found long sessions were somewhat problematic because the longest I could wear the HE-560 without a break was about 45 minutes to an hour. The problem for me was that the excessive side pressure from the headband was noticeable; after that length of time, it became oppressive. Also, the pressure on the back of my ears slowly built up over the time that the HE-560s were on my head. While I would not say that the HE-560s are less comfortable than the heavier Audeze LCD-2 headphones, for me they were more physically fatiguing after an hour of use. My solution was a walk around the block every hour.

If you wear eyeglasses, you will most likely want to take them off when using the HE-560 unless your eyeglass temples sit very flat on your head. With my eyeglasses, the temples created a slight gap in the earpads that prevented them from getting a complete seal. While having an incomplete seal with over-ear, full-sized, open-enclosure headphones isn't a critical failure, as it would be with in-ear monitors, it's still less than ideal. Sonic Impressions
As you might expect from a headphone that is part of a manufacturer's "reference" lineup, the HE-560's sonic character attempts to be as neutral and natural as the technology permits. As with most large-diaphragm planar designs, the HE-560 produces a large soundstage that seems to extend outside of the user's headspace. Imaging within the HE-560's soundstage was precise, and when attached to some amplifiers (such as the fine Moon Audio Dragon Inspire IHA-1 single-ended tube headphone amplifier, the sense of three-dimensionality was as convincing as any headphone system I've heard.

Another sonic characteristic that I've often experienced with a large-diaphragm planer headphones is a sense of bass weight and impact accompanied by proper pitch accuracy. The HE-560's bass has just the right balance of power and drive without being overbearing or bass-centric. Even with EDM material, the HE-560 delivered low bass without any sense of strain.

The HE-560's upper frequency response is sweet without sounding too dark or hooded. With some pop music where the Sennheiser HD-700 headphones can sound a bit harsh, the HE-560 headphones manage to tame the sonics slightly without losing too much of the music's edge. With classical and jazz material, I found that the HE-560's treble presentation on up to the splash cymbals and piccolos had enough shimmer and air to sound natural.

For me the HE-560's best sonic trait is its midrange presentation. Especially when coupled to the Moon Audio Dragon Inspire IHA-1, the HE-560's midrange timbre and musicality were exemplary. The IHA-1's grainless electronic texture combined with the HE-560's lack of any crossover to screw up phase information makes for a level of midrange purity that ranks up with the latest Stax headphones and amplifiers, including the new SR-L-700.

Low Points
• The HE-560 cannot be easily driven by a smartphone.
• The HE-560 was not comfortable for long-term listening.
• The lack of isolation makes the HE-560 unsuitable for noisy environments.

Competition and Comparison
I recently reviewed the $699 Audeze EL-8 and EL-8C headphones. Although they were slightly heavier than the HE-560, the EL-8 and EL-8C were more comfortable. The EL-8 is also much easier to drive successfully from a smartphone or portable player. The EL-8's primary weakness is its cable connection, which can loosen up and eventually fail over time. I preferred the HE-560's sonic character when attached to a beefy amp, but the EL-8C can be used in far more situations, due to its noise-isolating sealed enclosure.

The Sennheiser HD-700 has a higher list price, but its current street price puts it right around the price of HE-560. The HD-700 is a more spectacular-sounding headphone with a bit more sparkle and upper-frequency flare. The HD-700 is also a far more comfortable headphone, especially during long listening sessions. Both headphones offer little in the way of isolation and are intended for use in quiet environments, but the HD-700 can mate successfully with a much wider range of headphone amplifiers.

Another competitor would be the $599 AudioQuest NightHawk headphones. The NightHawk ranks among the most comfortable over-ear headphones currently available. It also offers the best isolation for what is still an open-enclosure design of anything I've used. The NightHawk has more personality than the HE-560, but for some listeners it lacks enough upper-frequency sparkle and extension. Both headphones also have above-average bass resolution and extension.

Conclusion
For me the HiFiMan HE-560 headphones were somewhat of a mixed bag of blessings and brickbats. They are well-constructed and have a neutral sound signature, but they are not all that "portable-friendly" due to their open-back, non-isolating design and power-hungry nature. I also had issues with the HE-560's fit. However, for someone who has heard the HE-560's more expensive siblings and longs for reference-level planar headphones for use in a quiet, controlled-ambience-level environment, the HE-560 headphone could be the optimal budget-friendly option.