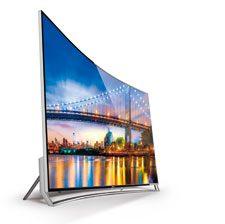 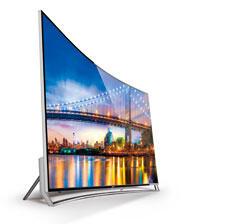 Hisense plans to introduce a total of 22 TVs to the U.S. market in 2016, including 720p, 1080p, and UHD models. all of Hisense’s 2016 UHD TVs (eight models total) will support High Dynamic Range, and screen sizes will range from 43 to 65 inches. The flagship 65-inch H10 (shown here) will feature both HDR and quantum dot technologies and have a full-array LED backlighting with local dimming. The 65H10C will be available in the second half of 2016 for $2,799.99

From Hisense
Dedicated to continually pushing the envelope with innovative design, technology and value to the consumer, the number-three TV manufacturer globally is looking to achieve the same position within the U.S. with its groundbreaking, affordable, high-quality televisions.

Since introducing its first 4K model in 2013, Hisense has become the fastest growing 4K TV brand in the U.S., a testament to its dedication to R&D expansion, brand building efforts and nimble operations that ensure consistent value is provided to customers and retailers. In addition, Hisense offers an industry leading warranty program, with more coverage than any other brand.

“At Hisense, the customer is central to everything we do–from product concept through post-purchase experience and support,” said Jerry Liu, Chief Executive Officer of Hisense Americas. He added, “as an agile and modern brand, our global and local capabilities allow us to execute new technologies faster than competitors. We look forward to advancing our distinctive offering in the U.S. by bringing more TVs to market in 2016 than ever before, while continuing to provide our customers and retail partners with exceptional performance, choice and high-quality technologies at more attainable price points.”

Demonstrating this commitment to the U.S. TV market, Hisense has announced the addition of 22 new TV models for 2016, from 720p and 1080p to 4K and the next generation of the company’s proprietary ULED technology. As exemplified by the H7 series in 2015, Hisense will expand the global 4K market in 2016 by making HDR processing accessible to the mass consumer with its H8 model. Hisense will also continue to expand its Roku TV line-up and deliver 1.07 billion colors for a seemingly infinite number of shades with its curved ULED technology.

Protected by 17 patents, ULED technology enhances color, contrast, black level, brightness and smooth motion with a combination of advanced hardware and software. The technology is up to three times brighter than OLED with better dynamic range and perception of black and white. The latest iteration of ULED will be even brighter and more colorful with a color gamut of 91.2 percent of Rec.2020 and 99.98 percent of the DCI-P3 color spaces and 1000-nit peak brightness.

HDR for Everyone
Leading the industry, all Hisense 4K televisions will feature HDR processing, which is based on the UHD Alliance HDR specification, ensuring the television is capable of displaying any subsequent HDR content providers may create. HDR Processing uses proprietary algorithms to remap luminance and color information to the capabilities of the display, producing a picture with increased color accuracy and realism.

HDR processing will be available to more consumers than ever with the addition of the disruptively priced H8 series. An advancement of the brand’s extremely popular H7 series, the H8 series also features multi-zone Full Array Local Dimming, Peak Lumina Control. The H7 series will continue in 2016 as well. All Hisense 4K TVs use proprietary motion estimation and compensation (MEMC) algorithms, called UltraSmooth Motion, to create and insert frames into the picture that enable smoother transitions for the viewer. In addition, UltraSmooth Motion incorporates two backlight technologies: blinking and scanning, which also contribute to smoother fast action images.

Always Smart, Never Complicated
With Hisense’s proprietary Smart TV platform, retrieving and viewing content is simplified in 2016. Access to all of the best viewing apps like Netflix, Amazon Video and YouTube; music streaming via Pandora; weather forecasts from AccuWeather; and social connectivity via Twitter enhance and complement the overall viewing experience, without complication.


With an easy-to-use and intuitive user interface that was developed exclusively for the U.S. market in Hisense’s R&D lab in Atlanta, GA, the continuous scrolling design enables the user to pass over live content and apps, as well as change inputs and adjust settings using the remote control.
Additional apps can be purchased via the Opera TV Store.

In 2016, Hisense will also expand its popular line-up of Hisense Roku TV models. Hisense Roku TVs are powered by the Roku OS and include a simple, personalized home screen, 3,000+ streaming channels and powerful search and discovery features such as Roku Search and Roku Feed. Consumers can also use the Roku Mobile App for iOS and Android to view personal video, photos, or audio on their Hisense Roku TV using the Play on Roku feature, as well as search for their favorite entertainment using Voice Search.

The Hisense Roku TV H4 Series is expected to be available later this year in 32″, 40″, 48″ and 50″ sizes. Pricing and additional information below.