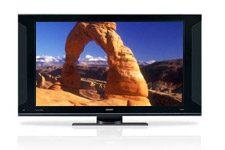 Having just returned from the Consumer Electronics Show (CES) in Las Vegas, I've had the opportunity to check out virtually every LCD and plasma panel on the market today. When I then say that Hitachi's Director's Series plasma is easily near the top of my list when it comes to sleek design, I hope you understand I have a considerable frame of reference. Measuring 42 inches diagonal, the 42HDX61 is a sight to behold, both when the power is on and also when off.

Featuring the most unique tabletop stand I've ever seen, this plasma display warrants serious attention if you're looking for a stylish centerpiece for your home entertainment system.

To mention but a few reasons the 42HDX61 is worthy of your attention, this plasma has more connection flexibility than just about any model I've seen. Offering things like a CableCARD• slot, a built-in HDTV tuner, not one but two HDMI inputs, and a USB port for connection to a digital camera, the 42HDX61 has all of your bases covered.

Unique Features
Most people like the idea of a plasma (or LCD flat panel) display because they think it will look sharp in their living room. And that's true. However, unless your space is pre-wired, or you plan on hiring a professional installer, you're going to need quite a few cables going to the plasma. A typical home theater includes a cable or satellite box, a DVD player and maybe a DVR or (gasp!) VCR. A mess of wires running into the back of your plasma quickly chips away at its posh factor. The latest crop of A/V receivers have gotten much better at switching and upconverting your various inputs, but they're still not perfect - especially if you want to leverage DVI or HDMI. In addition, due to limited real estate on the panel itself, many plasmas are limited in the number of inputs they can offer. The 42HDX61 solves both of these problems by using an external Audio Video Control Center (AVCC).

About the size of a DVD player, the AVCC gathers up all of the connections you wish to display and feeds the plasma panel with a single interface cable. As aforementioned, the AVCC incorporates a CableCARD• slot, two HDMI ports as well as multiple component and traditional analog inputs. The supplied interface cable is only nine feet long, but a longer version is available for purchase through Hitachi. In addition to simplifying your wire traffic, the AVCC allows you to purchase shorter cables for connection to your other hardware. Shorter means less expensive, which is good, but shorter cable runs are also beneficial for ensuring the best possible picture quality.

If you're not going to wall-mount your plasma, the 42HDX61 features the slickest tabletop stand I've seen to date. You'll be the envy of all your friends with Hitachi's motorized swivel base – standard on the 42-inch model and optional on the 55-inch. A simple tap of the remote's left or right cursor buttons swivels the plasma 30 degrees to the left or right. Though not something you'd need all the time, I could easily see it being handy when dealing with fluctuating room lights and/or sun glare. Since my 16-month old son Danny loves remote controls, I was happy to see that you can lock control of the swivel within the unit's menu system.

Read more about the Hitachi 42HDX61 Plasma on Page 2.

Installation/Setup/Ease of Use
Like most plasma panels, unpacking this unit is a two person job. The
motorized swivel base came pre-attached, so all that was left to do was
unpack and connect the AVCC. The interface cable between the panel and
the AVCC is a DVI cable joined with an eight-pin cable resembling a
S-Video cable. This eight-pin cable carries audio as well as control
data to the plasma panel. After making the connections, I set up the
DVD player to use the HDMI input and made sure I was in fact seeing a
digital signal. Since the Onkyo can upconvert its HDMI output, I chose
720p as my output resolution. The 42HDX61 confirmed 720p over HDMI on
"Input1" when hitting the remote's Info button. Overall, the
installation of this unit was relatively painless.

The process for setting up the DVD player as I described above is
somewhat involved. That is to say, the 42HDX61 features what Hitachi
calls its "A/V Network," allowing you to control multiple devices from
the AVCC. Infrared flashers are included and the manual provides codes
for controlling your gear. This is a handy feature, but it was somewhat
lost on me since it requires a dependence on the Hitachi remote.

The 42HDX61 comes with two remotes: a large full-featured remote and a
small everyday remote with only the most critical buttons. I always
like it when manufacturers offer this solution; however, I must admit I
wasn't crazy about either of these. The small remote isn't bad, but I'm
not one for horizontal volume controls. The primary remote is unique
in that the Channel and Volume controls use free-spinning wheels in
place of traditional rocker buttons. Each wheel is very similar to the
scroll button on a PC's mouse. They're a novelty, but I much prefer the
traditional rocker. The rest of the remote's buttons, particularly the
cursor buttons, are too soft for my tastes. The primary remote is
backlit, but it's fairly useless since none of the button labels are
illuminated. The backlighting also emits an annoying high-pitched noise
when lit. Like I said, I wasn't crazy about either of these remotes.

Final Take
The 42HDX61 is a 1024 x 1024 panel featuring Hitachi's ALiS display
technology. One of the primary benefits of ALiS is its ability to
minimize the barriers between pixels, resulting in a more detailed
image. After some initial video calibration using Digital Video
Essentials, I first wanted to see how this display handled DVD. Using my
Onkyo DV-SP1000, I popped in the funniest movie of 2004 – Fox's
Dodgeball. (I swear this movie gets funnier every time I watch it!) The
black portions of the deadly Purple Cobra uniforms were relatively deep
and much more convincing than I expected. With all of the lights out,
the black letterbox bars (due to the film's 2.35:1 aspect ratio) were
more of a deep charcoal grey than a true jet black, but still much more
desirable than LCD.

Upconverting the DVD to 720p over an HDMI connection, I was floored
by how smooth and film-like Stephen Root looked while attempting to
dodge traffic. ("If you can dodge traffic, you can dodge a ball!") The
same smoothness and wonderful detail was present while watching The Mask
of Zorro in HDTV from VOOM. Images leapt off the screen and it was all
too easy to stop taking notes and just enjoy the flick. Though I was
unable to have Gregg Loewen (LionAV.com) calibrate this set for me, I
think this plasma would greatly benefit from a full ISF calibration.
Color accuracy did appear slightly off, but only at times and never to
the point of distraction. Fast-moving text, such as the floating
"Onkyo" screen saver did reveal some stuttering, but this problem has
more to do with plasmas in general than with the 42HDX61 individually.

With connectivity galore and a smartly-designed external A/V control
center, the 42HDX61 has everything you need to handle today's newest
hardware. Combining strong video performance with attractive all-black
styling, the 42HDX61 is off the charts sleek.