Feature News Stories
Published On: March 9, 2015
Last Updated on: October 31, 2020
We May Earn From Purchases Via Links

As we wait for the arrival of Ultra HD Blu-ray, early UHD adopters are forced to rely on streaming and downloads for access to UHD content. Is your home network up to the task? 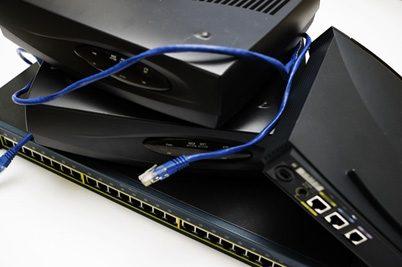 One of the things missing at the 2015 Consumer Electronics Show was Ultra HD Blu-ray. Sure, Panasonic showed off a prototype of an Ultra HD Blu-ray player, with no pricing, release date, or other specifics. The final Ultra HD Blu-ray standard is expected by mid-year, which hopefully means products will arrive by the holiday season. But what do you do in the meantime if you purchase one of the many new UHD TVs on display? DirecTV offers some UHD content if you own the right combination of equipment, and Dish Network showed off a 4K set-top box at the show, but the fact is that streaming is really the way that most people are getting their UHD content today...and streaming uses up some serious bandwidth that you may or may not have in your home.

Without question, residential Internet speeds have been improving in many parts of the United States, but the types of bandwidth necessary to pull off feats like the ones being shown at CES are not being piped into everyone's house right this moment. A lot of lip service was given to 25-Mbps down service being the starting point for Ultra HD streaming, but that's really not the whole story. You might have 25-Mbps service down from your provider; however, if your in-home network isn't using "enterprise class" high-end networking gear, you are pumping data into your house via a fire hose but distributing it to your devices--as HomeTheaterReview.com contributing writer Dennis Burger says--"through a soda straw." If you are considering upgrading to Ultra HD, it's imperative that you consider upgrading your in-home network beyond the Radio Shack or Best Buy routers and switches of today. They simply are costing you performance that you can't afford to give away, especially considering all of the other things you do on the Internet while someone is trying to stream Breaking Bad in UHD from Netflix.

This leads us into to the touchy subject of net neutrality and ISP monopolies. The Internet Service Providers want to sell you Internet the way cellular companies do: by increments of volume. If you are binge-watching House of Cards, you likely are eating up tons of bandwidth, and they want you to pay more for that, just as you do for premium channels. But with only a few ISPs to choose from, what's going to keep the prices in check and the speeds unfettered? The big ISPs have more lobbyists in Washington than most of the industries fighting to ensure an open, fair Internet. NPR talks about upwards of 20 municipalities that want to give their residents world-class Internet but can't because of the monopolistic stranglehold that the ISPs have politically. If you are the letter-writing type, now is a good time to let your Congress-person know how you feel about this topic, as the other side is offering the typical trappings of free private jet trips, lavish perks, and everything else that those in Washington do to curry favor with the powers-that-be.

The options coming from DirecTV and Dish look to be positive developments, as they won't tax your Internet bill or bandwidth and you may already have one of the two services in your home at this point. The bandwidth that comes from space isn't competing with what comes across your cable, which will help diversify the demand for bandwidth a little bit in the early-goings. In the long term, though, the satellite companies and cable companies will likely have to upgrade their platforms, hardware and beyond, to accommodate the large volumes of data that the consumer electronics companies are talking about today in relation to their best new products.

Remember, HDTV was an agonizing pain in the ass to get rolling in the early 2000s. Those of us on the cutting edge reverted back to terrestrial antennas and D-VHS decks to get the sexy-looking 720p or 1080i images that we so badly desired. Being an early adopter to Ultra HD is going to have similar growing pains, but man is the picture looking good.

Tell us in the comments below where you are at with your UHD adventure? How fast is your Internet service, and do you plan on using satellite for UHD content this year?