How the Distribution Chain Changed the Home Theater Business Forever

How the Distribution Chain Changed the Home Theater Business Forever

My entire career has been made in the specialty audio-video business. I started in 1990 in Philadelphia at Bryn Mawr Stereo as a 16-year-old, five-hour-per-week, part-time salesman in the suburbs, then moving to Sassafras, where I sold Denon, Boston Acoustics,... 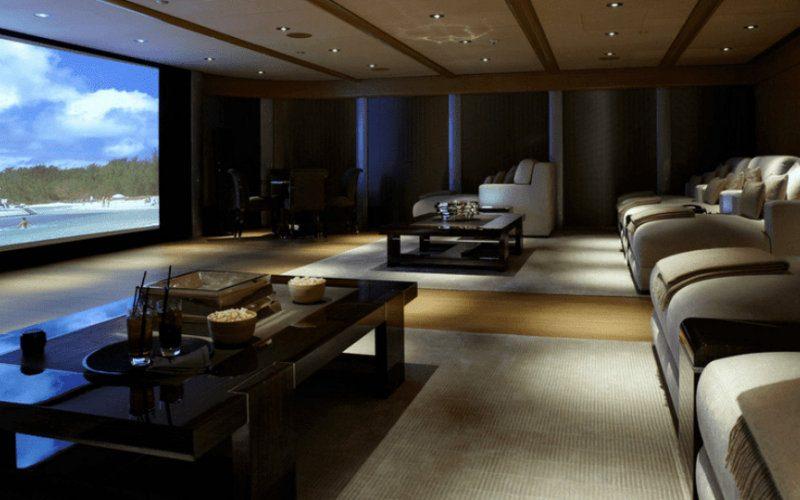 My entire career has been made in the specialty audio-video business. I started in 1990 in Philadelphia at Bryn Mawr Stereo as a 16-year-old, five-hour-per-week, part-time salesman in the suburbs, then moving to Sassafras, where I sold Denon, Boston Acoustics, Adcom, and Magnepan, along with a healthy dose of pretty high-end 12-volt car audio. Retail stops got more and more high-end when I left Philly to attend the University of Southern California for Music-Business school in a riot-torn South Central Los Angeles. At Christopher Hansen Ltd. in Beverly Hills, I was pretty successful as a 19 year old selling Wilson Audio, THIEL Audio, Mark Levinson, and Transparent Audio, so the guys at Mark Levinson’s Cello recruited me to be one of the four people (along with Mark on The Upper East Side) to sell this Bugatti-like audiophile legend part-time while still in college.

Somehow I became inspired to leave a six-figure, 20-hour-per-week gig at Cello with what seemed like a whopping $11,000 commission check, a Macbook 520B, a 9600 baud dial-up modem, and not anywhere close to half of a clue of what I was doing while a junior at USC to create a startup that would become AudioRevoluton.com, an online magazine talking about high-end audio when everything anyone knew back then was in print. Within a few years, AudioRevolution.com morphed into AVRev.com, which also included video and home theater and was ultimately sold on February 29, 2008, without me having a hint of what was pending economically later in 2008, to a publicly traded company called Internet Brands. After they pretty much hosed me on my “earn out” for roughly $500,000 and screwed over my editorial staff, I responded by starting HomeTheaterReview.com, which was built with $400,000 of my seed money from the sale of AVRev.com and ultimately rose from the ashes of possibly the worst economic crash since 1929. Somehow it all worked out for the best. And thank God for that.

With my full AV industry resume on display here in the HTR wayback machine, the main reason why the different levels of success in my career were possible have had a lot to do with market factors, not so much any special talents that I have. The specialty AV business didn’t know downtimes economically until the real-estate-based recession of 2009. By all means, there were national recessions, even global ones, but the specialty AV business was always prepared. We had the Compact Disc. We had the Walkman. We had Laserdisc. We had Dolby ProLogic surround sound. We had big-screen TVs. We had plasma TVs. We had satellite and its cable-killing content like national access to sports programming. We had satellite radio. We had DVD-Video. We had DVD-Audio and SACD (OK, don’t count those). We had 720p, 1080i, and eventually 1080p video. We had HD DVD and ultimately Blu-ray. We always had something to inspire people to spend money at the stereo store. But then almost overnight, the stereo stores weren’t there anymore, at least not on a national level. Circuit City failed after firing their commissioned salespeople. Tweeter, the company that bought up local chains like Bryn Mawr Stereo and many other regional players, wasn’t far behind them en route to bankruptcy despite a market valuation of over $750,000,000. Ultimate Electronics was another national chain that sold high-end AV products like Krell that went bye-bye in the same era. When the dust settled, the only national chain of brick-and-mortar retailers left was Magnolia/Best Buy.

As one high-end audio brand VP once told me, “if you want to have any distribution in places like South Dakota, you better be in with Best Buy,” and the folks at Best Buy knew it. They “charge” brands a pretty penny to be on their store shelves, and who is to give them competition? Amazon? Target? Walmart? Costco? While they are all now-viable distribution channels for many more mainstream brands, with Amazon picking up more and more luxury marks, they still don’t do demos. They, like Best Buy, are staffed with clerks – not commissioned, professional, specifically trained salespeople like a traditional stereo store. Perhaps some of the Magnolia stores could do an old-school home theater or audiophile demo, but that’s harder to come by outside the Magnolia sphere.

An era where two generations of audio-video enthusiasts would go to “the stereo store” and be blown away by the experience and the technology came to an end. Many of the one-off audiophile and home theater stores morphed more into being custom installers, which was the trend in the mid-2000s. No longer did they have to stock as much product. They could work on higher retail margins and have less seasonality. This was a more sustainable business model, no matter how much the traditional audiophile companies hated it. A long-time friend of mine was literally cut off as a Wilson dealer because Wilson Audio didn’t like the fact that he downsized his store from a huge traditional audiophile retailer to a 2,000 square foot hybrid retail showroom that eloquently displayed big Wilson speakers, Audio Research electronics, and Transparent Cables, but also had active demo vignettes for products such as Crestron, Control4, Savant, TVs-in-mirrors, automated shades, invisible speakers that install behind the drywall, and so much more new school.

Wilson had no Miami-area replacement for this dealer — a dealer who once was the National Sales Manager for the brand and lived in Provo, Utah, before moving back to take over this legendary retail store in South Florida. Like quitting a job without having a new one, Wilson found out that this capable sales team could go out and tell all of the Wilson clients that they had new speakers from audiophile-level in-wall companies like Wisdom Audio. The dealer re-sold their best clients on room-corrected speakers that took up no floor space while flooding the used market for Wilson for a long time to come. This is how the distribution chain changes directly affected the specialty AV business post-2009 recession.

Where progress has been made is with companies who sell direct. Before the Recession of 2009, many AV companies refused to sell direct to the consumer. Today, they have no choice and are, in fact, better off for it. Far better off for it. With generous trade-in and return programs, specialty AV manufacturers can make more of the profit “pie,” if you will. That allows them to build products that are higher performance at lower retail prices yet are paired with even more profit dollars. That is a sea change for AV manufacturers in the booming economy between 2010 and today, aka the longest boom-economy in U.S. history.

Specialty AV brands that embrace Amazon.com are also finding success in places that they didn’t expect. While direct sales via cost-per-click ads on platforms like Google are more and more expensive “per-click” as well as “per-sale,” Amazon is providing insane growth opportunities in their well-trusted chain. I remember vividly being told by Sony that they would “never sell online” back at a CES 1999 or 2000. Can you imagine them not being on Amazon today? It’s unthinkable.


Without national chains other than Magnolia, how does PR work in 2020? Not as well as it did before, in that some new brand comes along with a “better mousetrap,” but how can that anesthesiologist in Bensenville, Arkansas, hear it? How can the lawyer in Coeur D’Alene experience it? Not at a brick and mortar store most likely. Millennials and damn-near everybody else expect to be able to buy whatever they want on Amazon and in most categories they are right. Need proof? We got a small commission on one of our readers buying a $3,400 Toto toilet on Amazon, as they seemingly had clicked on one of our affiliate links and then bought the pricey crapper. We’ve sold 77-inch OLEDs, high end AV preamps, and many other high-four-figure products via Amazon, as well as toilets (and cans of borscht, 13-piece BDSM bondage kits, and pirate eye patches… and if you’re curious, thankfully we don’t have names or locations to go with the sales). The game is different today. The pipeline is very different.

There are plenty of new-school success stories. While not my favorite company for a number of reasons, it is hard to call Vizio anything but a success. They took a “let’s sell flat HDTVs like boxes of Cheerios” mentality to Costco and dropped the floor out of the market, leaving no money in selling a big, expensive TVs. For them, they blew a $3,000,000,000 deal to sell the company to the Chinese Netflix named LeEco but they are still worth a pretty penny. That’s an impressive way to “exploit” a new channel for this era.

Take a look at Tekton Designs as an audiophile example of a success story. Having studied under Ray Kimber and designed some successful, sold-direct speakers at Aperion Audio, speaker designer Eric Alexander struck out on his own. His super-easy-to-drive, custom-pained, made in the USA speakers got a foothold with the micro-watt tube amp people, but that grew quickly. His value proposition was so good and he had patented midrange designs that were game changing. Eric’s company has a hard time keeping up with manufacturing demand years and years after his audiophile coming out party, and good for him, as he is a great guy.

In the end, the ways of the past in terms of distribution models are over. Nobody is likely ever going to repeat the success that our dear friend, Sandy Gross, had with Polk in the 1980s, Definitive Technology in the 1990s, and then, in the modern era, GoldenEar — which he just sold to AudioQuest — making him the most successful speaker marketer since Dr. Bose, in my eyes. The industry shouldn’t be looking to copy Sandy and the others of his era. There’s a new way to do it. Online sales, direct sales, at-consumer-show sales, crowdfunding, CPC sales, etc. As much as AV enthusiasts and audio-video manufacturers hate change, change is being forced upon us all.

You'll automatically be entered in the HTR Sweepstakes, and get the hottest audio deals directly in your inbox.
0 0 vote
Article Rating
Subscribe
Connect withD
Login
Connect withD
0 Comments
Inline Feedbacks
View all comments
Author
Jerry Del Colliano
When you buy through links on our site, we may earn an affiliate commission. Your support is greatly appreciated!
This is the static ad content. This is just a placeholder for now to get things styled.
Visit Website