There have been many significant events that have rippled through the consumer electronics causing change in good and bad ways. One of these events, was the failure of Tweeter. 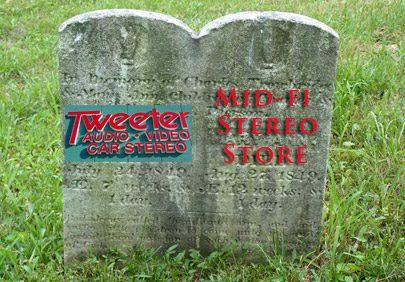 The stereotypical mid-fi stereo storeis the place where millions upon millions of people have gotten their first taste of meaningful specialty audio/video. I am not talking about crappy mass-market TVs and cheapie white van-inspired speakers. The local stereo store is the place where people with a little scratch in their pockets can learn about the good stuff. Products with more performance, more value, more pedigree, products made by hand, products made locally – the good stuff. More than one audiophile or home theater enthusiast started their journeys at the local stereo store, yet today, in many parts of the country, the specialty AV shop is sadly a dying breed.

Regional specialty audio/video chains have been found in nearly every major city in America and Canada for decades. Historically, they sold everything from home audio and custom installation to home theater, cell phones, car audio and beyond. These small to mid-sized businesses brought diversity to the business of consumer electronics, as they bought locally with a heightened sense of what each area needed in terms of consumer electronics. As a collective group, these specialty mid-sized chains were the engine of growth for a generation-long boom time for the audio video business that started with the victory of VHS over Betamax in the late 1970s and lasted as a nearly recession-proof business until the real estate correction in the United States in mid-2008.

So, if these regional AV chains are so important, why are there so few of them left in the market today? The answer comes in one word: Tweeter. Boston-based Tweeter was one of the best examples of a regional chain that had its success dating back to 1972. This value-added store was highly focused on training and met the AV needs of one of America’s biggest cities with a power-packed lineup of top audiophile- and videophile-grade components. Tweeter was a regional powerhouse and, with growing power during the heyday of specialty AV, Tweeter started to gobble up other like-minded specialty AV chains around the country. Giddy with easy Wall Street money, the minnow swallowed a whale’s worth of specialty AV chains and stores including (but not limited to) Bryn Mawr Stereo (Philadelphia), Hi-Fi Buys (Atlanta) Showcase Home Entertainment and Dow (San Diego), as well as smaller companies in Illinois, Texas, California and Arizona. Tweeter had become a true force to be reckoned with in the specialty AV business. If your product was in this chain, the purchase orders (POs, as they are known) could easily be above $1,000,000 each. Solid salespeople pushed your added value product in a clean, well-managed store at a time in the world when consumers could get money for their $6,500 flat HDTV right from the ATM known as their home equity loan. Things were good until Tweeter bought their biggest chain of AV stores, Sound Advice in Florida. This is when the company bit off more than it could chew. As some insiders involved in the deal suggested, the Tweeter corporate culture changed. The chains that Tweeter was buying, like Bryn Mawr Stereo and Hi-Fi Buys, were like-minded companies that fit into a specific culture. Wall Street brought in bean counters who were looking to outsource the legendary sales training programs. Wall Street brought in executives from failed retailers in commodity-driven, non-technology sectors and had them change the corporate culture at Tweeter for good. And that started the death spiral. At its peak, the company was worth reportedly as much as $750,000,000. On March 2007, the company whacked 49 stores and put 650 people out of work while it looked for bankruptcy protection. Despite a number of attempts out of bankruptcy and various investors, Tweeter took its miserable last breath in November 2008.

What was shocking in the aftermath of the failure of Tweeter was the lack of new stores emerging from the rubble. Yes, Best Buy’s Magnolia stores and stores-inside-stores came to prominence in this period but, respectfully, modern Best Buy Magnolia stores are not the same specialty experience that Tweeter was. Pre-Best Buy Magnolia (a Seattle-based chain) was just like Tweeter, but it didn’t keep its identity once the Blue Shirts invaded. Today, Best Buy is closing down innovative ideas like Geek Squad and shuttering stand-alone Magnolia stores to offer a more clerk-worker experience inside their increasingly warehouse-like electronics stores. Many think Best Buy is now also in a death spiral. During Tweeter’s boom times, companies would pump six-figure cash payments into the company’s coffers in order to protect their distribution chain with the growing national chain. After Tweeter failed, these same moneyed AV manufacturers were unwilling to help the former stores rebuild. There were some custom installers who got their start in a post-Tweeter world, but few of the executives could rally enough money to put Humpty Dumpty back together again. It was 2008, the economy was a mess and investors were freaking out. Times weren’t so good. Circuit City was about to fail, leaving 33,000 people without work. The national competitor for Tweeter in the mid-to-high-end retail space, Ultimate Electronics, was en route to go out of business in glorious fashion. New York retailer 6th Avenue tried to pick up some of the Circuit City stores in the Philadelphia, New Jersey and Delaware locations, but had limited success with these once-profitable locations. Consumers in a recessionary new economy were happy to either not buy new consumer electronics for their homes, which were all of a sudden worth roughly half of what they were a year or two ago, or they would buy cheaper electronics at warehouse and discount stores such as Costco, Wal-Mart, Target and Sears. Other meaningful options for consumers to buy higher-performance, specialty AV electronics came in the form of new Internet-direct brands, which offered online support, liberal return programs and stellar values. Amazon.com also didn’t miss out on taking its piece of the market share left for dead by the stunning mismanagement of Tweeter.

In 2013, as the U.S. economy slowly pulls itself up from a brutal economic body blow, there are still excellent stereo stores out there. Seattle Washington’s Definitive Audio is considered to be a better, more evolved version of Tweeter, with robust retail, custom installation, marine, commercial and aviation departments. However, it has never expanded into other cities, so they’ve kept their focus on selling to their Starbucks, Amazon, Boeing and Microsoft clientele in the Pacific Northwest, which is what they do best. And there are other good regional stores and small chains beyond Definitive that thrive today as well, but the long-term devastation that Tweeter left for the specialty AV market was to take the geo-specific power of these retailers from the market in a way and at a time when they couldn’t come back in any meaningful way. It was like a massive fire burned down the forest, yet barely any growth ever peeked up from the ashes. The failure of Tweeter was more like a Chernobyl-like radioactive meltdown than a forest fire.

The U.S terrestrial rad
io industry went through the same type of regional sterilization after Congress approved deregulation of that industry in the Telecommunications Act of 1996. Before 1996, one company or person could only own seven FM, seven AM and seven TV stations in the country. Afterwards, there were little to no rules. Companies like Clear Channel and CBS/Viacom, juiced on Wall Street money and leveraged to the nines, were buying up every radio station they could get their corporate hands on. They would fire the jocks and program directors while getting more and more production from fewer and fewer salespeople asked to take less commission in order to keep their jobs. Guess how that worked out? Nearly as well as the failure of Tweeter, Ultimate Electronics, Circuit City and the rest of the consumer electronics business. The fact is that there is something important about understanding the needs of a specific region. An oldies station in Philadelphia is most successful when its playlist adds in key songs from Philly-sound artists like the O’Jays, Motown and Hall and Oates. Less than a two-hour drive away in New York, oldies radio tastes are slightly different. New Yorkers like a little more 1950s’ doo-wop and artists such as Billy Joel. Across the country in Los Angeles, oldies stations do best when they mix in a little more Beach Boys, Jan and Dean and the Doors. Highly paid and experienced program directors know these subtle details, but the Bain Capital bean counters that helped to ruin radio couldn’t afford these employees, as radio only existed to make a very few people very wealthy, no matter what the long-term consequences. Tweeter and the other failed chains acted in the same way and both lost their way because they forgot the importance of meeting the needs of their customers on a regional basis.

Will there be new specially audio/video chains in the future? That’s hard to predict. Apple stores are the most profitable per-square-foot retailers in the world, beating out even Tiffany’s, proving that people do love a well-done retail experience and are clearly willing to spend more on value-added products. Amazon, catalog stores and Internet-direct retailers all are doing a fantastic job with the market niche that they serve. In the end, it would be good to have retail chains highlighting truly meaningful, high-performance, high-value consumer electronics with trained, commissioned salespeople who actually care to offer their local customers something more. Could there be another Tweeter-like national chain or even growth in some regional chains? I can see it. What about you?

I was just researching on when most major A/V stores were closed and came upon this article. I worked for Tweeter for a year and a half and will say it was the best employment experience of my life. Made a lot of good friends with customers and vendors. Tweeter also had people who loved their jobs and were constantly training. Just starting off you received a month of training. And you are right about the bean counters, you could see a drastic change in the environment when they came aboard. Good article.

I worked in an Orange County store at the end. Due to the expense of advertising in CA we got no coverage other than an occasional small ad in the paper. We also got no customers and the one’s we got wanted us to price match Paul’s who was always on the radio and not averse to offering low prices. Nobody made money at Tweeter.

0
Reply
Author
Jerry Del Colliano
When you buy through links on our site, we may earn an affiliate commission. Your support is greatly appreciated!
This is the static ad content. This is just a placeholder for now to get things styled.
Visit Website