So, you're looking to finally set up a great home theater system in your home and have a pretty good idea of what components you want to include in it and where to get them from. Before you head out... 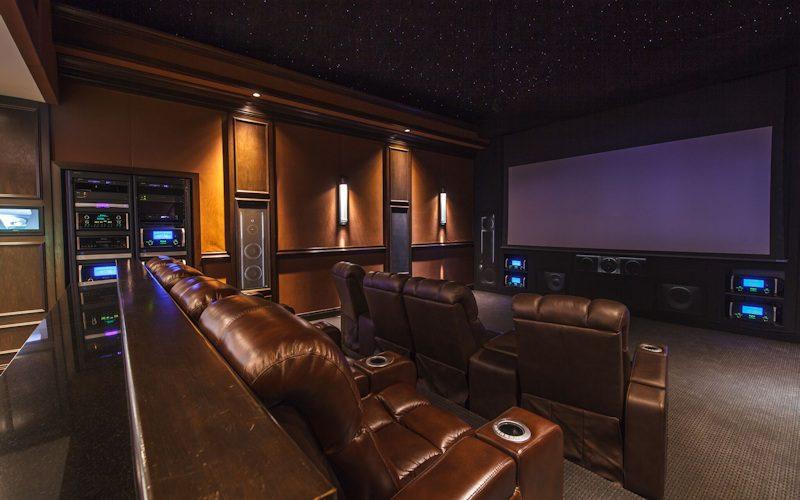 So, you're looking to finally set up a great home theater system in your home and have a pretty good idea of what components you want to include in it and where to get them from. Before you head out the door, it might be a good idea to mull over some advice from a couple of home theater retailers and custom installation experts on how to avoid some common mistakes they said are made all too often by consumers.

The retailers I interviewed for this story agreed on three of the most common mistakes that customers make: Not selecting the correct screen size for their specific rooms, making bad speaker choices (sometimes because they care more about the video than the audio), and not thinking through exactly how their systems should be controlled. Each also offered a few additional mistakes they've seen--mistakes that are often devastating and can end up costing consumers a lot of extra money.

The Wrong Screen Size Can Ruin a Room

All too often, customers insist on buying a display--whether it's a projection screen or flat-panel UHD TV--that's just "too big relative to the space and viewing distance" they have in their room, according to Alan Guyes, home AV buyer and corporate secretary at Audiotronics in Virginia. "Bigger is better, but only to a point, and we find that we frequently have to work with consumers to moderate the large screens/displays that they initially want for their space," he said.

Agreeing, Greg Porthan, custom audio installation manager at Abt Electronics in Glenview, Illinois, told me: "Customers have a hard time understanding the size of their wall." It's best not to proceed, therefore, without making sure you have the correct measurement of that wall and the space you have to work with.

Finding the right size screen for your room isn't as exact a science as some might hope, since there's a pretty broad range between "so close to the screen that you can see pixels" and "so far away that the display's resolution is lost on you." But Chris Heinonen of Reference Home Theater developed a helpful 4K screen size/viewing distance calculator that will put you in the right ball park. At a pretty typical seating distance of nine feet, his calculator demonstrates that anything between 70 and 120 inches would be appropriate.

There's one measurement that the average consumer is likely never going to make, though: The height of the room, and that's a factor that should be considered in addition to the more obvious length of the wall the display is going on. After all, an 85-inch TV might look awfully silly in a room that has only an eight-foot ceiling.

Selecting the Wrong Speakers Is a Common Faux Pas
These days, when it comes to speakers, all too many people "tend to think (soundbars) will get them that surround sound that they are looking for," Porthan noted. And that's just not true, he said, suggesting that consumers "buy towers, bookshelf, in/on-wall speakers with the true surround sound that you experience in a movie theater."

Guyes summed it up this way: "Soundbars are a massive improvement over no sound augmentation, but not a substitute [for a first-class home theater]."

However, there are plenty of good-quality soundbars on the market, so you don't necessarily have to consider this gospel, especially if the choice you're making is between a soundbar or no sound system at all. We have auditioned several soundbar solutions that we found to be worthy, including the recently reviewed Samsung Harman/Kardon HW-N950.


You also don't necessarily need to spend a ton of money to get a better speaker in many cases. For example, Orb Audio has some cool, affordable solutions. A small receiver and small speakers (even 2.1) can be a drastic improvement over most soundbars.

There are, of course, additional decisions to be made when it comes to speakers, including whether one should embrace object-based surround, and whether in-wall or in-ceiling speaker options would be appropriate for a system. When it comes to object-based systems, one can go overboard with channels, so a buyer should consider the depth of his or her room, from the seat (or seats) to the screen.

"In-walls and in-ceiling speakers are great options," Porthan said, adding: "Most of the manufactures have made great improvements to get the full sound of a floor standing and bookshelf speakers. Customers love [how] clean [it is and the] space savings of in-wall/ceiling speakers."

Buyers should also be just as selective when it comes to the very important center speaker, which are arguably the most important speakers in an entire system. Many center speakers on the market have bad horizontal dispersion because of the placement of their tweeters and woofers.

Click over to page two to for tips on system control, lighting control, acoustics, wiring, and balancing your home theater budget...


Control4 and Crestron are among the best-known companies for higher-end, professionally programmed control systems, while--on the other side of the coin--there are Harmony universal remotes from Logitech that allows the consumer to easily program and control all the devices in AV system from one remote control device. But there are still some consumers who don't care how their devices are controlled and are perfectly happy having either multiple remotes controls, or having everything controlled through a system so complex that few people can figure out how to turn the TV on.

The most important question to ask when it comes to controlling your devices may very well be this simple one, according to Guyes: "Who is going to be using this system and what is the technical competence of those other users?" He added: "To avoid family issues, the system needs to satisfy all family decision makers. That includes aesthetics as well as ease of control."

Be Sure to Balance Your Budget
Setting a sensible and balanced budget for what you want for your home theater is another important issue. All too many consumers are willing to pay a huge amount of money for the best 4K UHD TV they can get, but are then only willing to spend a few bucks on the audio side of the equation--either because they don't care about the audio altogether or don't have enough left in their budget to afford good audio after demolishing their budget on the video.

Let's say you're one of those folks who absolutely insists on buying a top-of-the-line OLED Ultra High Definition TV. So, you select that OLED model, and then have barely anything left to spend on audio or other parts of the system. The truth of the matter is that today's top-of-the-line LED-backlit LCD 4K TVs offer much of the performance of the OLED models, but are currently priced at about two-thirds lower in price.

Guyes summed up the big mistake that many customers make--or want to make before being talked out of it: "All sizzle, no steak." He explained: "Many do-it-yourselfers over-emphasize their display budget at the expense of quality of sound, room acoustics, operational complexity (multiple remotes and essentially a flow chart to operate). The irony is that display technology rapidly evolves, while less glamorous, but highly significant components like loudspeakers, room treatment, and similar ilk, are typically in place long after a flat panel or projector has been changed out."


How much ambient and natural light there is in a room is a key issue for every consumer setting up a home theater to consider, Porthan said, noting the importance of shading in many situations. While some consumers will rule out such products, often due to price concerns, the reality is there are some relatively cheap and effective options that can be custom made and delivered and installed in only about a week. IKEA has some modern looking, affordable, and easy to install options. Meanwhile, Lutron has D-Cell battery options for motorized shades that can be used in many situations also. You can pick from a wide variety of shade options, including color.

Ignore the Room Itself at Your Peril
Many consumers don't take any steps to make sure their room is treated for the best possible sound, Porthan said. If you're going the DIY route, there are some good options from companies including GIK Acoustics, who will help you design non-offensive room treatments. And QuietRock is pricey but offers a good soundproofing option, also.

Not Buying or Specifying the Correct Wiring, Cables, Etc.
Not having the correct wiring installed ahead of a home theater system setup is another common mistake, according to Porthan. For example, if the wiring is being run a long distance to get to the TV, "they should be looking for shielded category wiring or fiber optic wiring," he said, noting that many customers will instead opt for cheaper wiring that won't work as well to provide the best and most reliable connection, especially with 4K sources. That's often an issue because traditional HDMI cable itself can't be run for 100 feet because, at that distance, "the cable loses resistance all the way through and does not support the feed of the highest resolution," he explained.

If we're talking about a new home construction, meanwhile, the builder may be using cheap wiring that he or she claims is good enough, Porthan said. So, it may be best to take such advice with a grain of salt. After all, builders and electricians aren't always up-to-date on the needs of AV. Similarly, running wires for object-based (Atmos and DTS:X) surround is much easier at stage one because repairing drywall tends to be really messy and surprisingly costly when done after-the-fact.

One final area that you will want to consider: Whether you should rack mount your gear and, if so, where you should place your rack. This will depend on the system you have selected, according to Porthan. "Some systems will require local equipment located in [a] cabinet," he said, such as gaming systems, Blu-ray players, or a turntable, or "high-end gear for that special listening room." He suggested consumers send their house feeds and control to a "nice pre-amp processor," which he said will allow you to have "that look and feel of the equipment." If you don't have a control system, he said it's best to "locate the equipment on a nice audio shelf between the speakers or in the corner of the room," with the exact placement depending on wiring access.

Of course, none of this is intended as the last word on the subject. Every home theater enthusiast has made mistakes at some point in time--some specific, some more general. If you have any advice for the budding enthusiast based on your experience, be sure to share it in the comments section below.

You'll automatically be entered in the HTR Sweepstakes, and get the hottest audio deals directly in your inbox.
Author
Jeff Berman
When you buy through links on our site, we may earn an affiliate commission. Your support is greatly appreciated!