HydraConnect LLC has introduced the HSS-2, an control solution that also provides for video and audio zone management and switching. The product seems to be quite versatile and powerful. 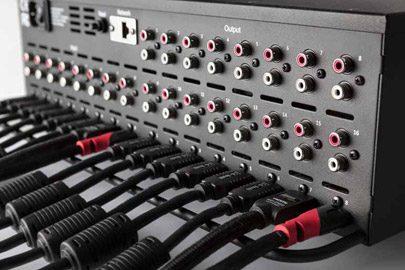 HydraConnect has introduced its HSS-2 HDMI Matrix Processor, which provides HDMI video, audio, and control integration in a Control4-based home automation environment. An HSS-2 used in a Control4 smart home system can simultaneously control eight HDMI sources such as Blu-ray players, satellite and cable receivers, and streaming media devices, as well as eight stereo audio sources. It can then distribute these media among eight video displays and up to 16 separate audio zones.

Using patented Consumer Electronic Control (CEC) functions previously unavailable in Control4 installations, the HSS-2 serves as a complete command center for whole house audio and video distribution and control. Thanks to the HSS-2's CEC control for almost all televisions and projectors, Blu-ray players, and A/V receivers, consumers no longer have to have IR flashers glued onto their expensive televisions. Installer/dealers no longer have the complexity of running wires all over the installation for these IR flashers. This application of CEC provides a better looking installation for the consumer and a simpler installation for the installer/dealer.

The HSS-2 is available through authorized HydraConnect dealers.