While it is not as "green" a pastime as, say, gardening, home theater enthusiasts can take some comfort that their passion doesn't make anywhere near the total environmental impact as "camping" with a large RV or dirt-bike racing. Nonetheless,... 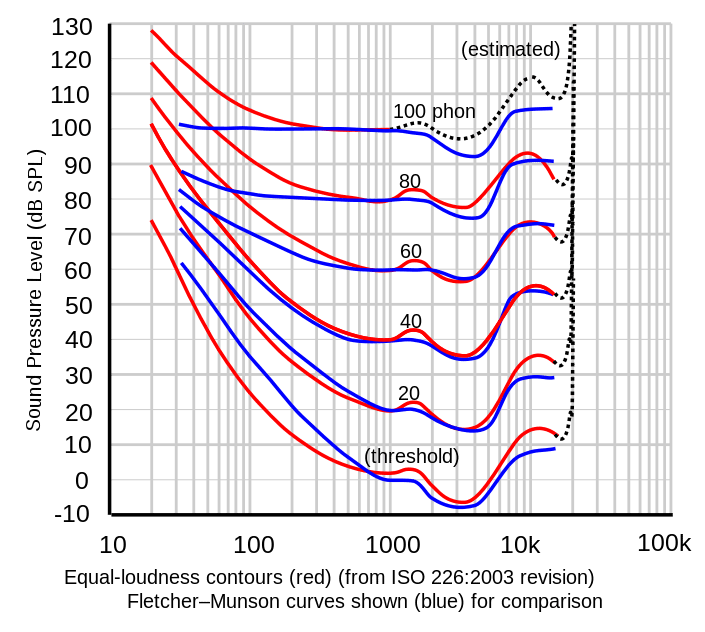 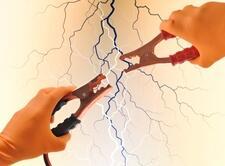 While it is not as “green” a pastime as, say, gardening, home theater enthusiasts can take some comfort that their passion doesn’t make anywhere near the total environmental impact as “camping” with a large RV or dirt-bike racing. Nonetheless, our hobby does require power consumption; and, for those who are interested in saving a little money or trying to live a more environmentally aware lifestyle, you can make wiser choices as to what equipment you purchase and how you use it. Every bit helps.

In seeking to reduce home theater power consumption, there are a couple of general guidelines you can follow: 1. Turn off the most power-hungry devices in your system when you aren’t using them; and 2. Use application-specific components instead of general-purpose ones to perform a home theater function. 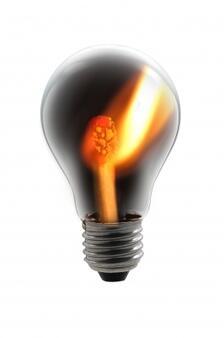 Identifying Power-Hungry Devices
The most power-hungry components in a home system are its image-forming devices: flat-screen TVs or video projectors. In general, the larger a flat-screen TV or the more powerful (brighter) a projector, the more watts (the unit of electrical power) it will consume. The 32-inch 3D TV with fluorescent-bulb backlighting that I use when developing 3D test patterns consumes around 95 watts in operation and around 100 watts during startup (as the internal computer for the built-in WiFi, networking, and streaming-video-decoding functions is booted up). Once startup is done, its power consumption is pretty constant, due to the always-on nature of the fluorescent backlight. You can expect display technologies that have variable backlighting (LED TVs) or that generate light only in those pixels that need it (plasma and OLED screens) to have power consumption that varies with image content – the brighter the image, the more power consumed.

Aside from initial product selection (aided by Energy Star stickers, see below) or watching only film noir productions, there’s only one thing you can do reduce the amount of power it takes to create the image in a home theater – reduce the overall screen brightness by turning down the brightness control or, for LCD screens, by turning down the backlight (for LCD sets, this is usually – and preferably – a different control than image brightness). For example, my 3D TV’s power consumption drops from 95 watts to around 35 watts when I reduce the backlight control from full-on to all-the-way-down (which doesn’t actually turn off the backlight). Of course, for such manipulations to be practical requires a darkened viewing environment and considerable recalibration of the basic picture parameters (brightness, contrast, tint, color, and gamma). But even with all the calibration tools in the world, a TV simply might not be capable of creating a good-looking image, much less an accurate one, with a too-low backlight setting. Try it and see.

Many gamers hook up their computers to their TVs to get, among other things, a more immersive large-screen gaming experience. But, all other things being equal (such as game graphics quality and the availability of equivalent game titles), a purpose-designed game system like a PlayStation or Xbox would likely require less power than a PC running the same game. This also holds for playing Blu-rays and DVDs on a PC compared with a standalone disc player and for the same engineering reason: good, purpose-designed hardware can be more energy efficient than the general-purpose computational facilities found in a computer, which have to work harder to produce the same video or audio signal.

For example, one of my PCs, a garden-variety dual-core model equipped with my test-signal-generating software, is hooked up to the aforementioned 3D TV. The PC alone consumes a constant 100 watts simply by virtue of being turned on and doing nothing more interesting than displaying a Windows 8.1 desktop. Playing a DVD with the PC boosts that figure: not only is the PC’s CPU working harder, but lots of the calculations in decoding a DVD are being performed by PC’s power-hungry graphics card. Changing the video-playback software also has an effect on power consumption; the VLC player is a power hog compared with WinDVD (10 versus five additional watts consumed, in this case). I attribute this to superior employment of the graphics card by WinDVD, but I could be mistaken. Contrast this performance to my garden-variety standalone Blu-ray player hooked to the same TV. It consumes 18 watts at idle and 21 watts when playing a DVD. So, if you want to save energy when playing a disc or streaming a network video, turn off the PC and use a purpose-designed disc player or the TV’s built-in network functions. While you’re at it, unless you need them, you should turn off your cable/satellite set-top boxes, which are startlingly power hungry (as can be observed in a power-meter reading and by how warm they get in operation). This would indicate to me that they contain circuits that are sub-optimally minimized for the functions they are required to perform…which should not be a surprise coming from a cable company.

Unless you have an unusual playback situation – a very large room, multiple extra surround speakers, rock-concert sound levels – the audio portions of a home theater system usually consume less power than the video components, even when playing loud music or soundtracks. With typical components, getting satisfying, moderately loud average sound levels takes around only one to 10 watts of power per channel! It’s the very short, very loud peaks that might require hundreds of watts for clean and accurate reproduction. But, since the peaks are very short (a few milliseconds to a few hundred milliseconds), the total amount of average power is still close to one to 10 watts per channel.

Click over to Page 2 to find out what makes the Biggest Difference, the Energy Star label, and Testing Yourself . . . 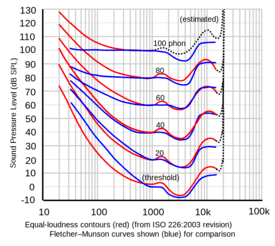 It is in the audio portion of the system where product selection can make a difference in power consumption. Choosing a speaker with a sensitivity that’s three decibels higher than another, for example, will reduce the amount of amplifier power (as measured in watts) required to reach any given sound level by half. (For an explanation of speaker sensitivity, check out Dennis Burger’s article “How to Pick the Right Amp for Your Speakers (or Vice Versa“). Again, all other things being equal (such as the sound quality delivered by the speakers being compared), you can use higher speaker sensitivity to considerably reduce the power specs of the receiver or amplifier needed to drive your speakers. This would have follow-on environmental benefits in the form of smaller and/or lighter amplifier components. Note that simply reducing your playback sound level by three dB will also halve the audio-signal power demands. But, like reducing screen backlight brightness, this can have reproduction-quality consequences, since our perception of frequency balances depends crucially on absolute playback level (hence the famous/notorious Fletcher-Muson curves, right), and there’s no way you can calibrate your ears around that.

Since power amplifiers and receivers are the main power consumers in the audio portion of a home theater system, the technology used to create them can have a significant effect on power consumption. The amplifier “class” (the circuit configuration) affects power consumption the most, with Class A devices consuming considerably more power even at idle than the other classes. Various digitally based power amplifier circuits and innovative power-supply circuitry can, on the other hand, produce surprisingly efficient amplifiers. Unfortunately, these circuit techniques haven’t caught on in a big way among manufacturers of audiophile-class equipment or even at the “mid-fi” level. Tube equipment, rare in home-theater-oriented setups to be sure, is environmentally undesirable for several reasons, not the least of which is higher power consumption at idle than comparable solid-state designs.

Look for the Energy Star Label

Some companies submit their products for testing to get a blue Energy Star label. The requirements for an Energy Star sticker are strictly defined (such as those for amplifiers and receivers or for televisions) and are comprehensive and well-thought-out enough to provide reasonable assurance that an Energy Star product truly does offer superior power-consumption performance over a product that doesn’t qualify. The problem is, unless a large number of directly comparable components are known to have been submitted for Energy Star qualification, one can’t tell if a non-labeled device is definitely inferior in power consumption to a comparable component with an Energy Star label. Fortunately, the most power hungry of home theater components is well covered, as there is a wide-enough array of Energy Star flat-screen TVs to provide the consumer multiple low-power choices that can be further selected for features or performance. And once you’ve bought an Energy Star TV, you can go beyond power consumption and start considering the other types of environmental impacts your home theater gear can make. But that’s a tale for another article altogether. 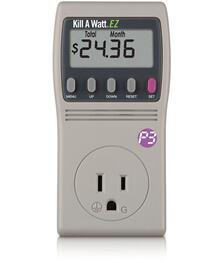 There’s no need to take my recommendations as revealed truth – you can test your system’s power demands yourself using a safe and inexpensive meter. As a test-instrument geek, I was pleased to run across a nifty little device in a local RadioShack a few years ago: the Kill a Watt EZ (model number P4460) from P3 International. It’s still available both through the Shack’s online store and various other online outlets, typically at far lower prices (less than $30) than I paid for mine. It, as well as other similar P3 products, is an intelligent power meter that can not only give you a digital readout of the wattage flowing through its front-panel socket, but can also give readings of such things as the current (amps) being drawn, the AC line voltage, and its frequency (the latter two are ideal for brownout mavens, during which such readings can fluctuate). Additional measurement options include display of apparent power (Volts x Amps) or of power factor (Watts/Volts x Amps). All measurements are RMS values, the same as the power company meters.

But there’s more. Since it knows the values of these parameters, the P4460 can calculate the amount of consumed electricity in kilowatt-hours (kWh), the unit of electricity consumption used by power companies in their billing. By entering your local billing rate (within in a range of $0.000 to $9.000 per kWh) into the P4460, the unit will calculate either the actual cost of the power consumed through the socket since the last reset or the projected operating cost over a week, a month (as shown in the picture), or a year.

The digital readout’s “ballistics” are too slow to display the instantaneous power consumption of a wildly varying load, as might occur with a power amplifier or receiver playing music. It is best used to monitor the power consumption of relatively power-steady devices, such as equipment that is at idle or performing tasks that are relatively constant in power demand (like a computer playing a CD or video disc, an amplifier playing test tones, or a screen showing test patterns). I stuck a few known-value resistors across the socket terminals, and the displayed wattage readings were plenty accurate enough for general home theater purposes. If you are concerned with your household’s total power consumption, the P4460 should be as important a tool to you outside of your home theater room as your sound meter (or sound meter app) should be in calibrating your speaker setup. It’s highly recommended.

You'll automatically be entered in the HTR Sweepstakes, and get the hottest audio deals directly in your inbox.
0 0 votes
Article Rating
Subscribe
Connect withD
Login
Connect withD
0 Comments
Inline Feedbacks
View all comments
Author
David Ranada
When you buy through links on our site, we may earn an affiliate commission. Your support is greatly appreciated!
This is the static ad content. This is just a placeholder for now to get things styled.
Visit Website