If Smaller Films Aren't in Cinemas, Where Are They?

If Smaller Films Aren't in Cinemas, Where Are They?

Blockbusters dominate the movie houses, but what if you don't want them to dominate your home theater. Where do you go to find an alternative to the big-budget tentpole movie. Pierce O'Toole offers some options. 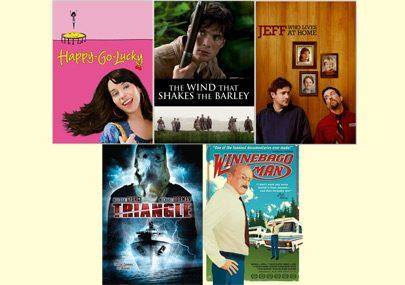 Several months ago, Steven Soderbergh gave the "State of Cinema" address at the 56th San Francisco International Film Festival. What he had to say was interesting - sometimes it was a rant, sometimes it was edifying. The most compelling part of the 36-minute speech was the math of how Hollywood works today.

Here's the thing: despite what a lot of people think, Hollywood doesn't want to make bad movies. Nobody in the system does, but Hollywood is a business, and a business needs to make money. Soderbergh spoke about what it takes to market a mainstream film, revealing that the costs are practically immutable. Whether a film costs $10 million or $100 million to make, the marketing costs are still about the same. Soderbergh explains that the cost of marketing a movie is $30 million nationally, plus another $30 million internationally. That's how much it costs to raise audience awareness. The reality is that a $10 million movie becomes a $70 million movie and, because of the way box-office grosses are normally split between the studio and the exhibitor, the movie needs to make roughly $140 million to be successful. How many $10 million movies are able to pull in that much money? The answer: not many.

There are, of course, exceptions. In 2010, The King's Speech was made for $15 million and pulled in about $414 million worldwide. That same year, Black Swan made $329 million on a $13 million budget. Even taking into account the marketing costs, these movies are successes. However, the more likely scenario is something akin to The Hurt Locker's box-office gross. The 2009 winner of the Best Picture Oscar was made for $15 million, and it earned $49 million worldwide. When you add on the $60 million in marketing, the movie becomes a financial failure.

On the other hand, a $200 million movie becomes a $260 million that needs to make $480 million to be a success. How many $200 million movies make that much money? Most of them. The Avengers cost $220 million to make and earned $1.5 billion worldwide. The Dark Knight and The Dark Knight Rises each made $1 billion on budgets of $185 million and $250 million, respectively. This year, Star Trek Into Darkness has brought in $446 million and cost $190 million to make. The blockbusters have the numbers in their favor.

Why should home theater enthusiasts care about the business model of Hollywood? Several reasons. Blockbusters make for good demos. They cost a lot of money to make, but that money shows up on the screen. They look vibrant and impressive in high-definition. They take advantage of the Dolby TrueHD and DTS-HD Master Audio soundtracks with booming explosions and larger-than-life scores. But what happens if you are looking for something different? Something more dramatic? Or just something that is smaller and more intimate? How do you find these films if they aren't showing up in the theaters?

Video-on-demand has become a successful solution for smaller films, oftentimes coinciding with a limited theatrical run. For home theater enthusiasts, this seems like a great solution. These movies are delivered right into your home, letting you take advantage of your gear sooner. However, while these movies are easily available, they don't just fall in your lap. You have to do a little work to assemble a VOD-friendly system. Many new Blu-ray players and HDTVs now include apps for Netflix, CinemaNow, Amazon Video on Demand, VUDU, and more. If you're not ready to upgrade those products, you can buy an Apple TV, Roku, Vizio Co-Star, or similar device to add VOD functionality at a very reasonable price. Kaleidescape is even getting in on the action with a download store of its own. But the question remains: how do you navigate these services to find worthy content?

For Netflix subscribers, there is a website called A Better Queue. What this site allows you to do is filter movies on Netflix by year, genre, and Rotten Tomatoes' Tomatometer rating. When you see a movie that looks interesting, just click on it, and you'll be directed to the movie on Netflix. Netflix is also launching its own service, Max. Max is a virtual assistant that will ask you a few questions to try to determine what kind of mood you are in before making recommendations. Unfortunately, there don't seem to be services like this for the other VOD options yet. However, there are always recommendation lists on the Home page. Take time to browse the new releases. Also, every service allows you to sort by genre, so you can narrow things down a bit that way. Mostly, it's about browsing. When something catches your eye, look into it, try it out. If you are renting from iTunes, VUDU, or the like, you're risking at most six dollars. If you're using a subscription service like Netflix, you're putting no money at risk. With the cost risk so low, it's worth exploring and taking a risk or two. If I hadn't, I wouldn't have discovered interesting films like Winnebago Man, Jeff Who Lives at Home Triangle, Happy-Go-Lucky, or The Wind That Shakes the Barley- all of which are films I love.

As VOD becomes more and more important, more tools will arise to help us navigate the vast libraries at our disposal. New services will emerge to cater to specific interests. Fandor is a streaming service that curates independent and foreign films. Warner Archive Instant offers streaming access to older films from the Warner Brothers library. Crackle gives access to Sony titles.

VOD is most likely the future for filmmakers and home theater enthusiasts alike. In a lot of ways, it's the present. It's a p
latform that can reach millions without the heavy cost of traditional marketing. It has allowed a lot of films to reach an audience that they were unable to reach in the theater. Never before has a home theater enthusiast had as much access to as much content as the gear allows. In short, it's a good time to have a home theater.

You'll automatically be entered in the HTR Sweepstakes, and get the hottest audio deals directly in your inbox.
Author
Pierce O'Toole
When you buy through links on our site, we may earn an affiliate commission. Your support is greatly appreciated!