The new Pro iDSD DAC/Streamer features DSD1024 and 768 kHz PCM decoding via USB, and can be connected to wired or wirelessly to your home network for streaming. 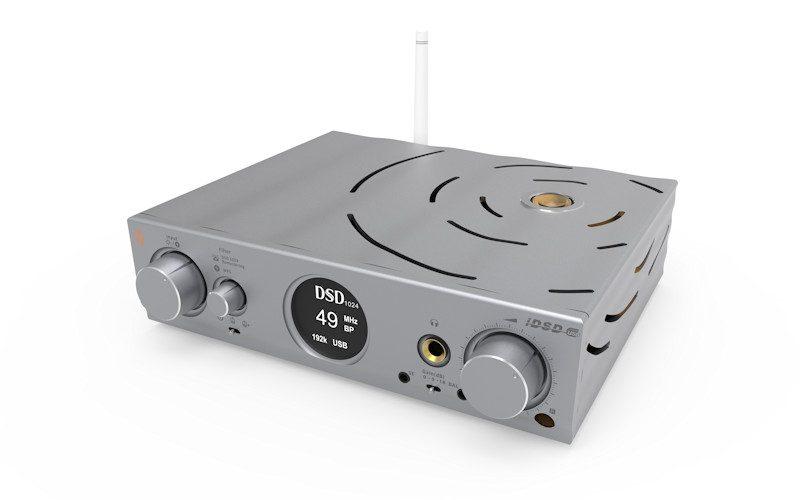 iFi audio is a bit of a shibboleth. While the brand certainly has its following among headphone enthusiasts, it’s much better known across the pond. The subsidiary of Abbingdon Music Research (AMR) just doesn’t seem to have broken through into wider name recognition here in the Colonies. Hopefully, the Pro iDSD will change that.

This new all-in-one DAC/preamp/headphone amp/streamer definitely packs the goodies in terms of format support, with DSD decoding capabilities up to 45.2 MHz and PCM decoding up to 768 kHz. Inputs include USB, AES3, S/PDIF (coaxial/optical combo), BNC multifunction (S/PDIF in or sync input), and your choice of a wired or wireless network connection for access to built-in TIDAL and Spotify streaming.

For more details, see the complete press release below:

iFi audio, a leading designer/manufacturer of high-fidelity desktop audio products, today announced the official launch of the Pro iDSD, a revolutionary DAC that can also serve as a preamp, headphone amplifier and digital streamer. The company’s new flagship DAC combines a number of cutting-edge features to give a home or professional audio system the best possible playback resolution and sound. The Pro iDSD is available for immediate delivery with an MSRP of $2499.

The Pro iDSD is Hi-Res Audio at its finest and has many format options. Powered by a Crysopeia FPGA Digital Engine, the unit can easily handle most audio formats to DSD1024 or DSD512 or PCM 768k with user selectable filters. It also gives the user the option to listen to tracks via MQA.

Under the hood, a quad stack of Bit-Perfect DSD and DXD DACs by Burr-Brown work in a custom “interleaved” configuration so that up to eight pairs of differential signals can be used and mixed. To handle the complex tasks of digital processing, the Pro iDSD employs the new XMOS XU216 X-Core 200 Series 16 Core processor which has a maximum of 2,000 MIPS (two billion instructions per second calculation power in dual-issue mode as a USB interface. That means the user will get every last nuance of detail and resolution in their music with precision timing.

The iFi Pro iDSD can be used in choice of wired or wireless modes of operation. With LINKPLAY WiFi/Network playback, built-in Spotify and Tidal and wide protocol support for 32-Bit/192Hz and DSD64, the Pro iDSD can directly link to a router for online music play.

iFi believes their products should be seen as well as heard so the xDSD was professionally designed to exude luxury and style. Despite the Pro iDSD’s many features, easy access and simplicity of operation were key design objectives of the xDSD. For additional functionality, as well as head-turning appeal, add the new Pro iRack ($269) to secure and interconnect Pro Series components. The user can start with a single module for one component and add more to stack multiple units.

“iFi audio is well known for compact products at affordable prices that deliver superb value, but we also boast reference DACs and amplifiers that deliver state of the art performance.” explained Victoria Pickles, Head of Global Marketing for iFi audio. “Such a product is our new flagship Pro iDSD, a DAC/streaming device with unique technologies and performance never seen or heard before. We believe the Pro iDSD is going to rock the digital world at home or in the recording studio.”

Key features of Pro iDSD are: