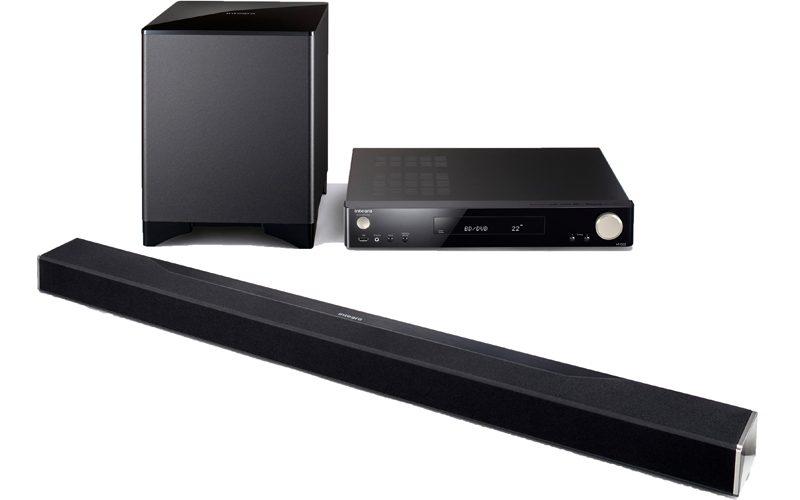 When soundbars first arrived on the market, I was not a fan. Most of the soundbars I heard weren’t much better than the cheap built-in speakers on the sides of the average TV. To top it off, those early soundbars cost just about as much as a basic home theater speaker setup. I just didn’t see much value in them. Sure, they saved space, but the audiophile in me rebelled against the thought of sacrificing so much sound quality.

When I think of our readers, though, I know that many don’t have dedicated home theater rooms, so they must accommodate various space and décor constraints. We are talking about “home” theaters, after all--not commercial ones. With that in mind, my goal when exploring soundbars has always been to find the ones that sacrifice the least sound quality while delivering on the space, economic, and ease-of-use considerations that are the soundbar’s raison d’etre. It’s fair to say that a lot more soundbars fit that bill than in the category’s early days.

One example is the Integra DLB-5. At $1,200 suggested retail, this 3.1.2-channel soundbar system proposes a unique combination of benefits--too many to cover exhaustively in this review. Here’s what I think are the most compelling highlights. To start, instead of putting the AV processing and connection options directly in the soundbar itself, Integra opted to include a standalone AV receiver as part of the system, packaged alongside the soundbar and subwoofer in one shipping box that weighs slightly shy of 40 pounds. The subwoofer is powered with 50 watts and equipped with a 6.5-inch driver. Oh, and did I mention that it’s wireless? Find a convenient space for it near an outlet, and you’re done--there’s no long subwoofer cable to tether back to the AV receiver (which does include a subwoofer pre out, in case one day you want to upgrade to a beefier model than the one included here).

The soundbar itself is features six forward-facing cone drivers, two each for the left, right, and center channels, plus two up-firing drivers for use with object-based sound formats like Dolby Atmos and DTS:X. Naturally, the slimline receiver, which weighs less than nine pounds, can decode both of those formats. It also features AccuEQ room correction, the ability to pass through 4K/HDR video, easy connectivity to almost any streaming music service you could want, and the variety of custom integration options that you would expect from an Integra product.

The Hookup
The goal of any soundbar setup is to make it as painless as possible. Even though the Integra system includes a standalone receiver, Integra has made simplicity a priority. There are very few cables involved. One proprietary cable connects the receiver to the soundbar, with no option to add additional speakers for the surround/rear channels. As I mentioned before, the subwoofer connects wirelessly to the receiver.

The receiver’s connection panel sports four HDMI 2.0a inputs and one output with ARC support, plus one optical digital input, one analog audio input, one FM tuner port, one headphone output, and one USB port that supports hi-res audio files. I ran one Wireworld Starlight 7 HDMI cable from my Oppo BDP-105 universal disc player to the receiver and one from the receiver to my TV. That was it.

The receiver supports wired and wireless (802.11a/b/g/n) network connectivity, as well as Bluetooth 4.1+LE. DTS Play-Fi, AirPlay, and FireConnect are built-in, as are the Spotify, Pandora, Deezer, and TuneIn streaming services. The system comes with an IR remote, or you can control it via the Integra Control Pro app, which I downloaded to my Samsung Note 5 phone in just seconds. Running the built-in room correction using the included microphone took another few minutes. Then I was ready to go.

Performance
First I tested the Integra’s performance with streaming video, firing up the premiere episode of Star Trek Discovery (CBS All Access). This Star Trek series has its own take on how the Klingons (a race of aliens in the Star Trek universe) look, dress, and sound. Klingons have always sounded harsh and barbaric in every series--it’s just how their warlike race is meant to be portrayed--but in this new show they sound a bit more garbled, speaking in a low, grumble-like tone most of the time. The subwoofer performed well here, allowing the mid-bass range of the dialogue to come across with good clarity. 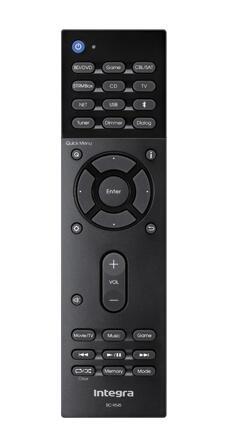 In one of the opening scenes, Captain Philippa Georgiou (Michelle Yeoh) and First Officer Michael Burnham (Sonnequa Martin) walk along a desert planet, searching for a way to release underground water to help a primitive native alien culture survive. Desert winds start to pick up, and I could hear the distinct rustling of sand both in the wind and trampling underfoot with each step. As a storm picks up, the crackle of the thunder was robust and authoritative. Star Trek Discovery isn’t natively object-based material, of course, but with the DTS:Neural:X mode engaged, the soundtrack is upmixed to add height channel information. I wouldn’t say this effect was completely natural-sounding, but it did a good job of creating the sense that the storm was coming from above. As expected from a 3.1.2-channel soundbar, you don’t get the whole “I am completely surrounded and immersed in the storm” feeling that a full complement of surrounds and four dedicated upward-firing speaker modules would deliver. Later in the episode, the USS Shenzhou is immersed in a great space battle, complete with Phaser fire, asteroids, and ship alarms. The experience was delightful through the Integra system and made me realize how far the soundbar has evolved from those early, unimpressive designs.

Next I moved to some native Dolby Atmos material, playing tracks from the Atmos Blu-ray demo disc that Dolby sent me a couple years back. With the popular “Leaf” track that is often used at trade shows, the imaging was great. I could easily hear the shifting positions as the leaf fell, and the soft sounds had strong resolution and clarity. When I switched to the clip from Mad Max: Fury Road (Warner), the Integra’s two smaller up-firing drivers just couldn’t quite muster enough strength to deliver on the illusion that a super-tall monster vehicle was chasing down the titular hero, Max.

With Hunger Games: The Mockingjay Part 1 (Lionsgate) and John Wick (Summit)--both favorites of mine when testing object-based systems--I got similar results. From a front-channel perspective, the Integra performed quite well, with strong resolution and clarity. It was great with both dialogue and ambient sounds, and it had great imaging and a strong ability to project out a pretty wide soundstage--which is often difficult for soundbars because the speakers are physically closer together than, say, three separate bookshelf speakers.

With the height material, though, the Integra was only somewhat effective. With more subtle height material, it did fine. However, with something that required the delivery of a lot of power or where you needed a lot of depth to create the illusion that you’re in the middle of a scene, the Integra fell a little flat. But that’s hardly surprising--after all, we’re talking about two smaller drivers trying to bounce sound off the ceiling and then hit your ears (the soundwaves will lose energy as they travel through air and when they hit an object). It’s probably one of the better renditions of Dolby Atmos you’ll find in a soundbar, but let’s not kid ourselves into thinking that anyone can defy the laws of physics.

With music, the Integra was equally adept. With Aerosmith’s “Dude Looks Like a Lady” (Geffen), the classic rockers were a delight to listen to. Steven Tyler’s raspy, grungy voice sounded true to character, and the electric guitars and percussion were all crisp and clear. Even when I cranked up the volume, the Integra felt like it was comfortable, not at all stressed. I’m not going to tell you that the Integra created a fully audiophile-approved presentation, like you’d get from a reference two-channel audio system; but, as far as soundbars are concerned, the Integra is among the best I’ve heard.

The Downside
The included subwoofer features a 6.5-inch driver, which is the same size or smaller than the ones used in the woofer section of many tower speakers. If you’re looking for that “pound you in the chest” bass action, few soundbar subwoofers will cut it, but at least you have the flexibility to upgrade the subwoofer down the road, if you choose.

I’m a firm believer that a full Atmos experience is going to require more than two height speakers to do it justice--and that ceiling-mounted or dedicated Atmos-enabled speaker modules are going to be your best bet for getting a true 3D height and depth experience. But you won’t find any competitive soundbars in this or any other price range that truly do any better in this regard.

The three-channel MartinLogan Cadence costs $100 more. In terms of the sound quality of the main three channels, you’ll probably find that the MartinLogan delivers more, due to its nine-driver design. And personally, I like the Anthem Room Correction system better. But the Cadence is only a three-channel soundbar--there’s no dedicated AV receiver, no wireless subwoofer, and no up-firing drivers for the object-based sound formats.

The Yamaha YSP-5600 hits a little closer to the mark, due to its Atmos and DTS:X capabilities. It does have the ability to do a more comprehensive 7.1.2-channel configuration, but it lacks an included subwoofer and costs $1,599.

Conclusion
From a performance perspective, the Integra DLB-5 competes exceptionally well within its price range, although it doesn’t quite measure up to the best high-end soundbars I’ve heard. The inclusion of the dedicated AV receiver gives you more connection options, more processing options, and more streaming/audio options than many competitors; add in the wireless subwoofer and the up-firing speakers, and you’ve got a very high value proposition here. If you desire the space-saving design of a soundbar but don’t want to sacrifice too much in the way of performance, features, and flexibility, the Integra DLB-5 is definitely worth a look.

You'll automatically be entered in the HTR Sweepstakes, and get the hottest audio deals directly in your inbox.
Subscribe
Connect withD
Login
Connect withD
0 Comments
Inline Feedbacks
View all comments
Author
Myron Ho
HomeTheaterReview Product Rating
Value:
Performance:
Overall Rating:
Check Product Price
When you buy through links on our site, we may earn an affiliate commission. Your support is greatly appreciated!
This is the static ad content. This is just a placeholder for now to get things styled.
Visit Website