Integra has added two new AV receivers for the consumer to choose from: the DTR-40.5 and DTR-50.5. With the new AV receivers comes several new features, including compatibility with Ultra HD. 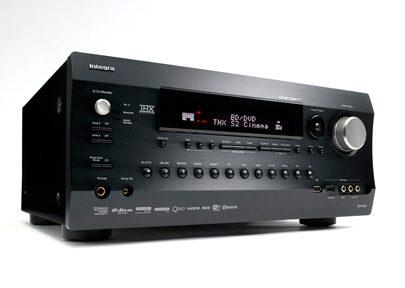 The Integra DTR-40.5 and DTR-50.5 add several important new features for 2013. These include full support for the new Ultra HD high definition video format, the addition of TuneIn to the internet radio content list, as well as built-in Wi-Fi and Bluetooth interfaces for modern media connectivity. These two new A/V receivers are also THX Select2 Plus.

The Integra DTR-50.5 has a more powerful seven-channel 135-watts per channel power amplifier, compared to the DTR-40.5's 7x110 wpc. The DTR-50.5 also has additional digital audio inputs, a differential DAC for the front channels, a programmable remote control, and the company's exclusive Digital Processing Crossover Network. DPCN reportedly improves the performance potential of bi-amped stereo speakers by eliminating the crossover overlap between the high and low frequency signals to prevent high and low frequency sounds from bleeding into the wrong drivers.

These receivers are designed to interface via Wi-Fi and Bluetooth to stream music from phones, tablets, and computers. With Integra's Remote Apps for iOS and Android, users can push music to the AVR from phones and tablets. They can also playback high definition music files in FLAC, DSD, ALAC, HD 24/96 and HD 24/192 formats from HD music download services. These networking features also provide access to audio streaming content such as that from Spotify, Pandora, Rhapsody, SiriusXM Internet Radio, Tune In and many others. The DTR-40.5 and DTR-50.5 also have a phono input and provide support for legacy digital and analog sources.

On the video side, both receivers provide full support for the new 4K Ultra HD video displays, using either the 4K pass-through feature or upscaling for conventional HD video sources via a Marvel QDEO processor.

Other connection options include eight total HDMI inputs (7 rear-panel) with two outputs for connection to streaming services via Apple TV, Roku, Blu-ray players and other sources, a USB port, and an Ethernet connection. The Integra DTR-40.5 and DTR-50.5 include an array of modern and very useful video features, including InstaPrevue, which allows users to monitor multiple program sources with this HDMI variant of picture-in-picture. There is also Mobile High-definition Link (MHL), which uses the front-panel HDMI port to deliver HD video and up to 7.1 channels of audio from compatible Android smart devices and other products.

Custom installers will appreciate the inclusion of Powered Zone 2 and Zone 2/3 preouts, two IR inputs and one output for remote control integration, and three 12-volt triggers. A bi-directional RS-232 port and Ethernet jack are available for connection to some home automation systems.