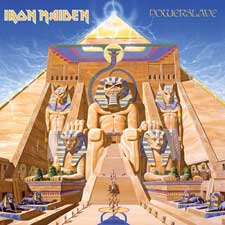 Onkyo has announced the exclusive release of 19 Iron Maiden albums via the company's hi-res audio download service. These remasters were overseen by Maiden member Steve Harris, and the collection includes 15 studio albums, two best-of compilations, and two live albums. Check out the press release below for the complete album list.

From Onkyo
ONKYO Corporation is delighted to announce the exclusive release via their hi-res audio download service of 19 IRON MAIDEN catalog albums encoded from 24-bit high-resolution masters, delivering the music to listeners exactly the way the artist and recording engineer intended. These are brand new re-masters from their original analog and digital sources, and is the next phase in IRON MAIDEN's ongoing catalog upgrade to make their music digitally accessible to fans on their preferred devices globally.

All 15 studio albums, two Best Of compilations and two live albums were personally selected by Maiden's founder member Steve Harris for this superior mastering technique: Iron Maiden, Killers, The Number Of The Beast, Piece Of Mind, Powerslave, Somewhere In Time, Seventh Son Of A Seventh Son, No Prayer For The Dying, Fear Of The Dark, The X Factor, Virtual XI, Brave New World, Dance Of Death, A Matter Of Life And Death, The Final Frontier, Somewhere Back In Time, From Fear To Eternity (2CD), Live after Death (2CD) and Rock In Rio( 2CD)

Steve comments:
"The hi-res mastering procedure allows the listener to experience the music as close as possible to the way the artist intended it to be heard. So of course I was very keen for the Maiden albums to be mastered in this way. The records have been available digitally before, when this medium first became a platform for music distribution but that was mastered with CDs in mind. The hi-res mastering process involves a different approach and it's great to finally deliver the music to our fans in as close to a pure and accurate sound as we could possibly achieve. For example, as most people know, I was never really happy with the sound on the first Maiden album but listening to it now, the guitars are louder, the drums more substantial and the overall tone is so very much improved in my opinion. Tony Newton and Ade Emsley who worked closely with me on the project did a terrific job recapturing everything from the original masters and together we've re- mastered them all digitally and I'm really happy with the results."

Tony Newton adds:
"The process started with locating all of the original album mix tapes (or whichever format they were mixed to). Then the choice of analog to digital converter was chosen for the most accurate capture to make it as close as possible to the sound of the mix as it was intended by the band. When a lot of these tapes were last captured it was in the 1980's, early days of digital and only 44.1khz/16bit files were possible. On top of this the new A/D converters are far superior now, and of course it is possible to produce files of far higher resolution. The result of this is that the songs now sound more defined with added depth and warmth. I was very excited to be asked to be part of this project, I honestly feel that there is a massive improvement in the quality of these classic albums.