Is Live TV Coming Soon to the Apple TV?

Is Live TV Coming Soon to the Apple TV?

The Apple television has a great deal of potential, but only if Apply can reach an agreement with the content providers: the television networks. Now there is a possibility that they may happen. 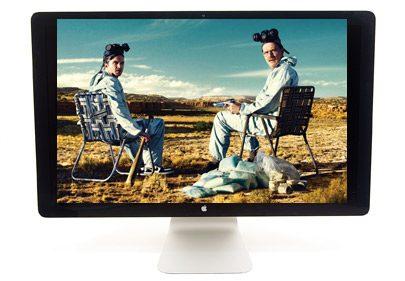 This year, one of the most popular industry rumors has revolved around the prospect of an Apple-branded TV. How would it be different from the current crop of smart, Internet-enabled TVs? How much would it cost? Does Apple have enough clout to make "a la carte programming" a reality, giving us the ability to subscribe and pay only for the TV channels we want over IPTV?

Sadly, this article has no answers to those questions. The Apple-branded TV remains the stuff of rumor, and recent reports suggest that too many hurdles currently exist for that product to become a reality any time soon. What we do know is that Apple is serious about getting into our living rooms. The company's CEO Tim Cook has said as much, and recent articles from CNET and The Wall Street Journal indicate that Apple might be turning its attention toward the set-top-box market, at least for the time being.

First, we learned from CNET that Apple has received a patent for an Apple TV box that includes live TV and DVR capabilities. The next day, the WSJ reported that Apple has been talking with some big names in the cable business, including Time Warner, about using the Apple TV box as a set-top box for cable customers. So instead of renting a box from your cable provider, you could purchase an Apple TV and access your cable lineup through it.

Apparently, Apple is not close to a deal with any specific pay-TV provider, so we're again left to speculate on what a cable-friendly Apple TV would look like and whether or not it will ever see the light of day. On paper, the concept seems similar to what TiVo has offered for years: an alternative user experience for the cable channels you already pay to receive. If you're dissatisfied with the interface and Web/streaming features that your cable provider offers, you can buy a TiVo box, feed your cable signal into it, and enjoy the channels you pay for through a UI that you prefer. This approach allows you to drop the set-top-box rental fees charged by your provider but, in exchange, you have to buy the TiVo box and pay the TiVo subscription fee. (Some cable/satellite companies have directly offered TiVo-branded boxes for consumers who desired it.)

In its current form, the Apple TV box costs $99, and there are no subscription fees directly associated with it (optional services like iCloud storage or Netflix will add fees). I think it's a safe assumption that a cable-friendly Apple TV would cost more, but how much more? What are people willing to pay for a box that presumably combines current Apple TV services - iTunes Store access, personal media streaming/AirPlay, and a host of preloaded apps - with a live cable stream and DVR functionality? Other questions arise, as well. Would you still have access to your cable provider's video-on-demand options, which would compete directly with iTunes? Would Netflix and Hulu Plus still be available on the box? Would the Apple TV finally add access to the Apps Store?

Perhaps the most important question is, what would the interface look like? Apple's success is largely owed to its ability to create a great user experience; can the company give us something significantly different (better?) than the myriad options that are already out there? The CNET story contains Apple's complete patent filing, with illustrations of some UI functionality. A follow-up Wall Street Journal article offers more insight, saying that the box would contain "features designed to simplify accessing and viewing programming and erase the distinction between live and on-demand content" and give users "the ability to start any show [including current episodes] at any time through a digital video recorder that would store TV shows on the Internet."

On the surface, this Apple/cable partnership seems like a win-win for both sides. The cable providers keep their programming packages intact and discourage customers from cutting the cord, while Apple potentially sells more Apple TV boxes, which could mean more iTunes sales, more iCloud subscriptions, etc. However, as the WSJ articles point out, cable providers are very leery of ceding control and letting Apple get a foot in the door of their industry. While the partnership could be beneficial in the short term, what happens if Apple does ultimately introduce a revolutionary TV that uses the same interface for an IPTV offering that cuts cable providers out of the picture? It will certainly be interesting to see if Apple can convince any cable providers to take the risk and embrace its vision of the next-generation set-top box.

Will Hisense's Purchase of the Sharp Brand Work Out for the Chinese TV Maker?