Is Walmart's Disc-to-Digital Service Worth the Time and Money?

Is Walmart's Disc-to-Digital Service Worth the Time and Money?

Walmart offers a service that allows consumers to have Walmart make digital copies of DVDs and Blu-rays for a fee. This puzzled Adrienne Maxwell, so she decided to try it out for herself. 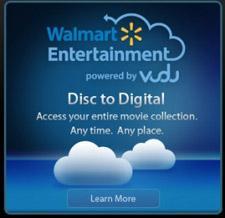 When I first heard about Walmart's Disc-to-Digital service, which allows you create digital copies of your DVDs and Blu-ray discs for a fee, my first thought was, why would anyone pay a fee for this service when you can already do this on your computer for free? My second thought was, is Walmart really the company to tackle this experiment? Rather than just sit back and question the service, I decided to try it for myself.

The basic idea behind Disc-to-Digital is this: Bring your physical discs to Walmart to prove that you own them, and the store will authorize access to a digital copy that you can view through the company's VUDU video-on-demand service. The cost is $2 to get an SD version of a DVD or an HD version of a Blu-ray disc; for $5, you can upgrade your DVD to an HD digital copy. Disc-to-Digital uses the new UltraViolet digital-locker system. Walmart links the digital copies to VUDU, which is accessible through any Web browser and a wide range of TVs, Blu-ray players, and standalone streaming media products. You can get a list of VUDU-supported devices here.

The first step in the process is to create an account on VUDU's website. I already have an account, so I simply signed in and went to the Disc-to-Digital page, where the next step is to create a list of movies that you want in digital form. Remember, it has to be a disc you already own, and the movie has to be on the list of supported Disc-to-Digital titles. Just because a title is offered through VUDU's rent or purchase catalog doesn't mean that same title is available through Disc-to-Digital; in fact, the amount of titles is fairly limited right now. Walmart currently has deals with most of the major studios, including Paramount, Sony Pictures, Twentieth Century Fox, Universal Studios, Warner Brothers, and DreamWorks; however, only select titles are available at this stage, with more to come.

The web page has very limited browsing ability--it shows you about 30 titles of the company's choosing, with no option to browse by genre, actor, etc. Your best bet is to decide what titles from your collection you might want in digital form, then use the Search function to see if they are on the list. In my case, my first search was for DreamWorks' "Madagascar"--this is one of my daughter's favorite DVDs, and it's now too scratched up to play reliably. So, I thought it would be a perfect candidate...too bad it wasn't on the list. ("Madagascar 2" was available, though.) While we're on the subject of family films, you may have noticed that Disney is not a partner (Disney is working on its own digital locker system called KeyChest). That's a huge drawback, as I think parents of young children would be the first to embrace this idea. They've already purchased a whole catalog of movies for their kids and don't want to buy them again in digital form, so the $2/disc conversion might be appealing. But alas, no Disney, which eliminated virtually all of the other children's titles on my list.

From my grown-up collection, I ultimately selected "The Matrix" (DVD), "The Lord of the Rings: The Fellowship of the Ring" (DVD), and "Iron Man" (BD). Before I could add these three titles to my movie list, I was informed that I needed to create an UltraViolet account, which involved entering a birthdate/password and accepting terms of use (I later received in email telling me to complete a few more account-authorization steps). Once I added the titles to my list, I was told to print said list and take it to my local Walmart. The printed form clearly tells you to take your list to the Photo Center, but it does not remind you to bring your discs with you to the store--a point I think should be made a lot more obvious.

Continue on to Page 2 to ffind out what happened in the aisles of Wal-Mart . . .

With list and discs in hand, I headed to the first of two Walmarts in my hometown of Longmont, Colorado. I took my list to the Photo Center and informed them that I wanted to use the Disc-to-Digital service. What do you suppose happened next? I found myself dealing with two employees who had not yet been trained on how to use the system and didn't seem especially excited to dive in to the process. Basically, I was told that their "machine" was busy doing a passport photo that would take about 30 minutes and maybe I should come back tomorrow. I wish I could say I was surprised by this result, but it's pretty much what I expected. On day two, I headed to the second Walmart in my town, where I was directed NOT to the Photo Center but to the Electronics department (where, ironically, there was a nice, big, floorstanding poster describing the service...and directing people to the Photo Center). There, I met yet another employee who had not yet used the Disc-to-Digital system but was at least willing and eager to figure it out. Twenty minutes later, three employees were still searching for the password to get into the Disc-to-Digital system as I tried to entertain my three-year-old with iPhone games. Now, I'm a fairly patient, understanding person, but come on. As I write this, it has been almost a month since Walmart launched the service on April 16th. Exactly how long after a service is made available should a company feel compelled to teach its employees how to use it?

Once they located the password and got into the system, the process of looking up and authorizing my movie list was quick and easy...but not without one more hiccup. In the two days since I had first made my movie list on the Website, "Iron Man" was removed from the list of supported titles. This just so happened to be the same weekend that "The Avengers" broke theatrical box-office records, and suddenly I could no longer pay $2 to get a digital copy of my "Iron Man" Blu-ray disc. Coincidence? Methinks not. Anyhow, the very nice and now very apologetic employee authorized the other two movies on my list and stamped the two discs with a Walmart logo to prevent anyone else from using the same discs to get their digital copies. The total cost was $7 plus tax: $5 to convert the "Matrix" DVD to HD and $2 to convert the "Lord of the Rings" DVD to SD.

The final step was to try and access my movies. I got home and immediately signed in to VUDU on a Samsung Smart TV, and happily both films were waiting in the My Movies section. The high-definition Matrix copy was offered in VUDU's 1080p HDX format; I'm not going to delve into the issue of picture quality here, as that subject has been well covered; however, I will remind you that VUDU recommends an Internet speed of 4.5 to 9 Mbps to stream the HDX format. I was also able to access the movies on my laptop through VUDU's website and on my iPhone through the
VUDU Player app (SD version only on these devices; an iPad app is also available). On my laptop, I was even given the option to download an SD version of the movie to watch through VUDU To Go when no Internet connection is available. The Google Play market does not yet offer a VUDU Player for Android devices, but an app is reportedly in the works. It's fair to say that, once you authorize these digital copies, there's no shortage of devices on which to access them.

So, we come to the all-important question: Is it worth your time and money to use Walmart's Disc-to-Digital service? For the tech-savvy consumer who knows that he or she can use any number of free software programs to create a digital copy on their computer, the answer is probably no. In the time it took me to drive to two different Walmarts and wait, I could've easily ripped those two movies myself. The free DIY approach gives you the flexibility to stream the content over your network (via DLNA, AirPlay, PLEX, etc.) or to physically access the file on a laptop or mobile device when no network is available. If you like the digital-locker idea, you could try Apple's iCloud digital locker to stream the content to compatible devices (you get 5GB free, 10GB for $20/year, 50GB for $100/year--and content purchased through the iTunes Store doesn't count against your storage space).

With that being said, the DVD Copy Control Association frowns upon the ripping of DVDs, even for use solely within your personal ecosystem with no sharing or illegal uploading involved. For those people who simply don't feel comfortable ripping a DVD and for the many who don't know how and have no desire to go that route, the Disc-to-Digital service is a compelling and completely legal alternative. I don't consider the $2-per-disc asking price to be exorbitant, but I guess it really depends on how many discs you wish to add to your movie list. If you've got 50 discs and all of them are actually on the authorized list (not likely right now, but let's go with it), you could pay a one-time fee of $100 for virtual copies that are accessible on numerous devices and require no hard-drive space on your end. That's not a bad deal. Plus, if you buy future UltraViolet-supported movies, you'll be able to access those titles through the same VUDU account.

The main limitations to Walmart's Disc-to-Digital service right now are its lack of authorized titles and the fact that it's still a somewhat confusing concept to the general movie-owning audience. The uninitiated user needs someone who will clearly explain what UltraViolet is, clearly articulate the benefits of this service, and walk people through the process as quickly and painlessly as possible. At least in my little corner of the world, that ain't happening at Walmart.