Just because your TV has a 3,840 x 2,160 resolution does not officially make it an Ultra HD TV, at least not according to the Consumer Electronics Association, which recently updated and expanded its list of core characteristics that a... 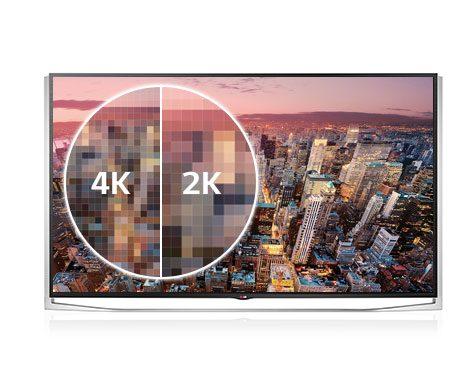 Just because your TV has a 3,840 x 2,160 resolution does not officially make it an Ultra HD TV, at least not according to the Consumer Electronics Association, which recently updated and expanded its list of core characteristics that a display device needs in order to be considered a true Ultra HD display. Here's the rundown of those core characteristics:

1. Display Resolution: Has at least eight million active pixels, with at least 3,840 pixels horizontally and at least 2,160 pixels vertically.
2. Aspect Ratio: Has a width-to-height ratio of the display's native resolution of 16:9 or wider.
3. Upconversion: Is capable of upscaling HD video and displaying it at Ultra High-Definition resolution.
4. Digital Input: Has one or more HDMI inputs supporting at least a 3,840 x 2,160 native content resolution at 24p, 30p, and 60p frames per second. At least one of the 3,840 x 2,160 HDMI inputs shall support HDCP revision 2.2 or equivalent content protection.
5. Colorimetry: Processes 2160p video inputs encoded according to ITU-R BT.709 color space and may support wider colorimetry standards.
6. Bit Depth: Has a minimum color bit depth of eight bits.

These core characteristics build upon the first-generation UHD characteristics released by the CEA back in October 2012, which required only three elements: 1) a display resolution of at least eight million active pixels, with at least 3,840 horizontally and at least 2,160 vertically; 2) an aspect ratio with width to height of at least 16:9; and 3) at least one digital input capable of carrying and presenting native 4K format video from this input at a full 3,840 x 2,160 resolution without relying solely on upconverting.

The importance of some of the additions is clear, while others are not so obviously vital. Number four is the big addition that addresses the arrival of HDMI 2.0. First- and second-generation UHD TVs that sported HDMI 1.4 inputs could only accept native UHD content with a maximum frame rate of 30 frames per second, while new UHD TVs with HDMI 2.0 can accept UHD signals at up to 60 frames per second. Most film content is shot at 24 frames per second, so the older HDMI 1.4 spec is fine for 2D UHD film playback. However, you couldn't watch The Hobbit in UHD at 48fps, nor could you watch 3D films in UHD. Future UHD gaming, sports, and potentially film content could be created at 60fps, and you'll need HDMI 2.0 to accept those sources. (Some manufacturers have provided an upgrade path to HDMI 2.0 for those earlier UHD TVs.)

At least one of those HDMI 2.0 ports must also support HDCP 2.2 content protection, designed to provide the secure transmission of content from a future UHD source to the TV. Right now, no such source device exists, and no content that I'm aware of contains the encryption, but it is coming, so it matters whether or not your UHD display can handle it (or be upgraded to do so). HDMI 2.0 and HDCP 2.2 don't necessarily go hand in hand righ t now, so it's wise that the CEA chose to add this provision.

Click on over to Page 2 for the rest of the Core Characteristics . . . Number three - which requires that an Ultra HD TV be able to upconvert current HD sources to its native resolution - is interesting in that I'm not entirely certain why the CEA felt compelled to add it. To the best of my knowledge, every current UHD TV on the market can do this, just as every current 1080p TV will upconvert lower-resolution sources to its native resolution. Certainly, some UHD TVs will do a better job at upconversion than others, but they all do it. One of my industry-insider pals speculates that this addition may be a pre-emptive measure to dissuade some (particularly lower-end) manufacturers from entering the market with a UHD monitor that does no upconversion at all and labeling it as a UHD TV. The Seiki SE50UY04 UHD TV that turned heads last year with its low, low price did a very poor job upconverting lower-resolution signals, but some reviewers and consumers recommended it for use as a monitor only, to show native UHD content. This could prompt some manufacturers to remove the upconverter entirely to sell a cheaper TV, and that's fine as long as the monitor is labeled in such a way that consumers know what they are (and are not) getting.

Numbers five and six are somewhat disappointing to me: they basically acknowledge that, from a color standpoint, the status quo is good enough. The ITU's Rec 2020 Ultra HD standard defines a much larger color space than the current BT.709 (aka Rec 709) standard and specifies 10- or 12-bit color. These color improvements will truly make UHD content stand out, even on smaller screens where the higher resolution may not be easily discerned. But for now, the CEA is content to say that the displays don't need to be capable of anything better, although they "may support wider colorimetry standards."

Beyond the core characteristics, the CEA has also addressed questions surrounding smart or networkable UHD displays. At least in the TV world, a vast majority of new UHD TVs are also "connected" TVs, and the majority of early UHD content will be streamed over the Internet from sites like Netflix. With that in mind, the organization has also come up with a list of characteristics specifically related to this TV genre. For a display system to be referred to as a Connected Ultra HD device, it must meet the following minimum performance attributes:

1. Ultra High-Definition Capability: Meets all of the requirements of the CEA Ultra High-Definition Display Characteristics V2 (listed above).
2. Video Codec: Decodes IP-delivered video of a 3,840 x 2,160 resolution that has been compressed using HEVC and may decode video from other standard encoders.
3. Audio Codec: Receives and reproduces and/or outputs multichannel audio.
4. IP and Networking: Receives IP-delivered Ultra HD video through a WiFi, Ethernet, or other appropriate connection.
5. Application Services: Supports IP-delivered Ultra HD video through services or applications on the platform of the manufacturer's choosing.

Note that HEVC (aka H.265) is the only video compression format that's specifically mentioned. HEVC is currently being used by Netflix for its 4K streaming, but YouTube uses Google's VP9. Most TV manufacturers have announced support for both formats; just make sure your connected UHD TV of choice contains the proper decoders for any and every UHD streaming site you want to use.

These new CEA guidelines will take effect in September 2014...but there's a catch. They are voluntary, so manufacturers are free to completely ignore them and label their display devices any way they choose. To further clarify the matter for both retailers and shoppers, the CEA is working with member companies to develop an official UHD logo to help identify products that meet the CEA's guidelines. We'll let you know when that logo arrives. It's a safe bet that you will find all of these characteristics in UHD models from the big-name manufacturers; but, if you go way off-brand to get a deal that seems to good to be true...well, you know the saying.