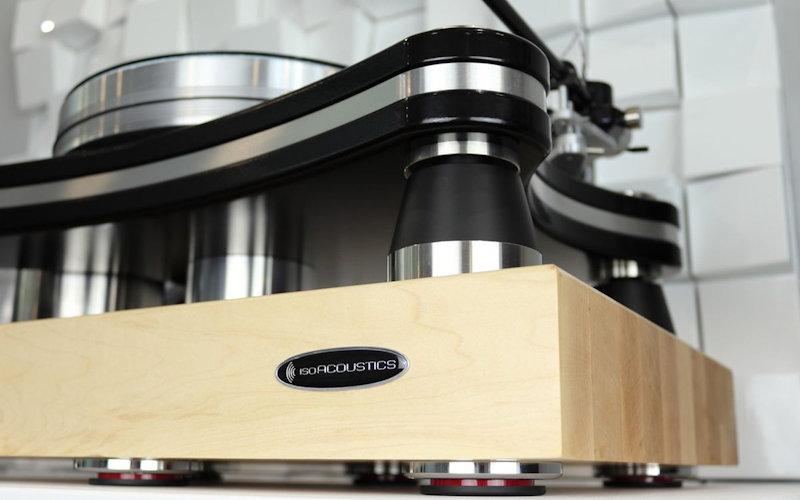 Paul Wilson has been an avid high-performance audio enthusiast since 1972, and has experience in all aspects of the market, from sales to business to journalism. He has been a member of the AudiophileReview.com and HomeTheaterReview.com teams since 2013, contributing regular commentary about the audiophile hobby as well as extensive gear reviews. His passions include sports, sports cars, collecting watches, art, cooking, and listening to finely recorded music.

Canadian manufacturer IsoAcoustics borrowed an old technology and partnered it with a new technology to help reduce unwanted turntable vibrations. This new product is called Delos, and it combines a butcher-block cutting board with footers based on the award-winning Gaia series of anti-vibrational devices to create an isolation platform for turntables.

I have been using IsoAcoustics Gaia 1 isolators for several years, first on my KEF Blades (at the recommendation of KEF), and now on my current speaker system, "The Note," designed by Mark Porzilli and manufactured by Laufer Teknik. In both instances, I found the Gaia 1s helped improve imaging and clarity.

For years, audiophiles have been using kitchen cutting boards under turntables to provide similar anti-vibrational benefits. One of the most basic attributes of butcher blocks is they add mass, something absolutely required for an effective anti-vibrational protocol. In the early days of anti-vibrational methodologies, it was thought most of the problems came from the outside, most notably the sonic energy bouncing around the room. Cutting boards added mass and were thought to keep vibrations (created by footfalls, to name just one example) from reaching the turntable through the equipment rack, then being picked up by the cartridge and passed along to the speakers as distortion.

Before long, however, engineers realized devices such power supplies, transformers, capacitors, circuit boards, motors, platters and spindle bearings are all potential sources of vibrations. This vibrational energy, created within components, could therefore be converted to electrical energy and travel through the system and manifest itself as distortion.

Analog turntables are among the audio components most susceptible to unwanted vibrations – whether internal or external. Through a process called "microphony," a cartridge may pick up unwanted signals both from the turntable itself as well as its surroundings. It is therefore important to curb this vibrational energy and prevent it from becoming distortion.

What the Delos series of platforms purports to accomplish is all of the above: add mass, essential for curbing room-borne vibrations, and draw vibrational energy from the component and convert it to heat, thereby greatly reducing the probability of internally borne vibrational distortion.

The Delos platform is available in 1.5- and 3-inch thicknesses in either maple or walnut with either four or six footers. The thicker units' increased mass should be more resistant to vibrations. Versions with four-footer devices in the bottom are intended to support a maximum of 65 pounds. Six-footer versions will support up to 100 pounds. Two standard sizes are available: 18 inches wide by 15 inches deep, and 22 inches wide by 16 inches deep. Costs range from $399.00 (USD) for the smallest size to $899.99 (USD) for the largest. My review sample, the 2216M1, retails for $599.99 (USD).

How Does the IsoAcoustics Delos 2216M1 Perform?

I have been using a platform of some type under my VPI Classic Signature turntable for years, most recently a Symposium Svelte Plus platform. It has been quite some time since I used my turntable without one, so I had no idea what to expect. To establish a baseline, I therefore began my evaluations with no platform at all, sampling a wide cross-section of music ranging from some early 1970s recordings that survived my beer-addled college dorm room weekends to more recent LPs I thought sounded adequate but not especially great. Finally, I naturally wanted to see what would happen with some of my best-sounding recordings.

Because my system is quite neutral, some recordings sound magnificent, others sound acceptable, and some sound very poor. What I discovered when not using any platform at all was the sound was very big. Not, however, in a good way. I felt it was too dynamic. Too much reverb and unwanted harmonics. My turntable sits on my equipment rack, which is a very heavy (about 500 pounds empty) custom unit. The top, where the turntable resides, is one solid piece of three-quarter-inch granite, sixty-four inches long and twenty-six inches deep.

Many of the recordings I played with no isolation platform in place had so much bass that the midrange was decidedly overshadowed. Not only was the bass immensely too powerful, but it had a noticeable resonance. In simple terms, it sounded "boomy." I started to turn down the subs but decided against doing so. In fact, I decided against revising any of my settings, subs, or phonostage. Good, bad, or indifferent, I wanted an accurate sonic picture.

On several recordings, I noticed high frequencies sounded as if they had an increased measure of sibilance. To be sure of my impressions, I played the digital versions of five of those albums, and did not notice any of the issues with the high frequencies or the low-end boominess I experienced in the analog format. That led to my first conclusion: My turntable sounds much more natural when sitting on a platform and not directly on granite.

In addition, I felt clarity was at times compromised by not having a base. For example, I played one live album on which the applause did not sound clear and concise. Claps sounded somewhat "smeared." On the other hand, imaging was dispersed laterally across the room and was quite placement-specific – not as accurate as digital, mind you, but not dramatically inferior.

When I placed the Delos 2216M1 under the turntable, lowered the tonearm, and sat down to listen, my surprise was immediate. This time in a good way. Almost all of the resonance in the low bass – particularly with the bass guitar – was gone. Whereas it sounded muddled with no platform, with the Delos beneath my turntable, it sounded tight, precise, and a pop could be heard as the strings were plucked.

High frequencies no longer displayed a noticeable sibilance – unless it was already in the recording. Cymbals had a perceptible attack and decay, and the decay lingered in the air almost like it would during a live performance. My biggest surprise was the imaging. As good as it was with no platform, it was even better with Delos. The instrumental placement was very specific and equaled what I experience with digital, which is phenomenal.

How Does the 2216M1 Compare to the Competition?

As mentioned above, I have for some time employed the Symposium Svelte Plus Platform in my turntable setup. Symposium utilizes a technology called "constrained layer damping," where multiple layers are intimately bonded to an adjoining layer, thus providing a path for reducing vibrations. When I compared the two, I found the Symposium platform also vastly improved bass. However, there was a slight but noticeable increase in clarity and imaging using Delos compared to the Svelte Plus. My Symposium platform is twenty-one inches by nineteen inches and retails for $699.00 (USD). Choosing between the two isn't easy, but in the end, I would rate the Delos as the superior product.

It should also be mentioned that, to a certain extent, a simple butcher block cutting board from the kitchen store can also work as a turntable base. And, at about $50.00 (USD) or thereabouts, it would be an inexpensive experiment to try. However, going this route only adds mass; it doesn't drain unwanted vibrations. For that, you'll need a footer device of some sort. Obviously, there are many types of these devices at all price points and design. Companies such as HRS, Mapleshade, and Pro-Ject all make isolation platforms, and even complete rack systems. Companies such as Stillpoints and Nordost are both highly regarded footer manufacturers. All of these companies, and many more, use similar technologies based on an internal layer designed to convert mechanical energy to heat to dissipate vibrations. They would be a good addition to any butcher-block isolation platform if you're interested in taking a DIY approach.

I found the Delos platform to be an outstanding product, both in performance and value. I have two components, my preamp and DAC, that currently reside on about $4,000 worth of Stillpoints each. What the Delos accomplished for my turntable, at a fraction of the cost of my more expensive solutions, is deliver a vast sonic improvement. Another benefit is that I find Delos to be very attractive. Both the platform and turntable look really cool sitting on my rack. I also like the additional height it adds to my turntable setup. All in all, Delos is an excellent and cost-effective choice for anyone interested in curbing unwanted vibrational distortion in their analog front end.