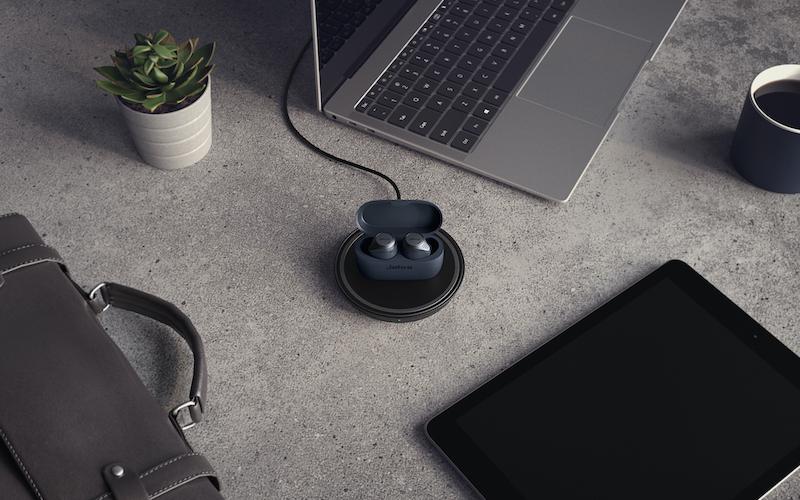 If you're in the market for a new pair of earphones that deliver sweet silence from the world around you, you might want to consider Jabra's new Elite 85t or upgraded Elite 75t series, both of which are iPhone and Android compatible and have built-in Siri, Alexa, and Google Assistant. Both incorporate Jabra's Advanced ANC technology, as well as HearThrough, for those times when you need to hear what's going on in your environment.

The new Elite 85t – which will be available in November – is built with 12mm drivers and has six microphones for superior phone call quality and a semi-open design. The Elite 85t is engineered for a comfortable fit and provides up to 5.5 hours of battery life with ANC on, and up to 25 hours of play time before the case needs to be recharged. The new Qi-certified earphones offer wireless charging and cost $229.

The existing Elite 75t model, meanwhile, has been updated to include Advanced ANC via a free upgrade through Jabra's  Sound+ app. If you don't own a pair, the Elite 75t with Advanced ANC will be available in October for $149.99.

Building on a leading track record of innovation in true wireless earphones, Jabra introduces ANC to its award-winning compact true wireless portfolio with the all new Elite 85t and upgraded Elite 75t series, with no compromises made on the sleek design or optimal fit.

The updates to the Elite 75t series - both Active and non-Active - will happen via a firmware update in the Sound+ app. Jabra is the first company to deliver ANC on an existing true wireless product line, creating one of the broadest true wireless ANC line-ups in the market. All based on the miniaturisation standards the market has come to expect from Jabra.

The newest addition to the Elite series, the Jabra Elite 85t, comes with Jabra Advanced ANC which delivers a level of noise-cancelling that goes one step further than Jabra's standard ANC offerings. Dual chipset in the earbuds deliver strong ANC capability as well as optimal sound processing. These are some of the smallest earbuds that offer premium ANC to create your private, quite space and delivers HearThrough to let you hear your surroundings - both features fully adjustable and with extra focus on natural sound performance and limited occlusion (blockage/closure), achieved via the semi-open design and multiple ANC microphones.

As more people than ever demand flexibility in making and taking calls, the new Jabra Elite 85t earbuds bring outstanding call quality for the user and the person on the other end, with the 6-mic technology (three on each ear, two on the outside, one on the inside). On top comes improved wind noise protection enabling great calls anywhere. Microphones on the inside and outside of the earbuds are used to provide Jabra Advanced ANC, which allows for improved noise cancellation, filtering out more noise. The flexibility of the Jabra Advanced ANC goes beyond an on/off solution as it is adjustable with dual slider from full ANC to full HearThrough, and anywhere in between, meaning the Jabra Elite 85t offers a more personalized experience that puts the user in control of their surroundings.

The 12mm speakers allow the Jabra Elite 85t to produce a big sound and powerful bass, while still enhancing comfort and relieving ear pressure with its semi-open design. Jabra has also adapted the ear gels to an oval shape providing a better sealing in the ear. This means the tower of the Elite 85t does not sit as deeply within the ear, giving users a more comfortable earbud, while maintaining a very secure fit.

René Svendsen-Tune, CEO at Jabra, said: "At Jabra we engineer products for purpose and today we are proud to show that our commitment to ANC is no exception. Users today are looking for great things in small packages, so we are thrilled to be offering our users best-in-class ANC in a very compact and sleek design. We are also excited to take our current users on the ANC journey with us with a free upgrade to their existing Elite 75t products - leading the charge as the first global brand to execute this over-the-air update. For us, ANC now means 'Accept No Compromise'!"

Elite 75t with ANC as standard

Now with ANC - the award-winning Elite 75t, both Active and non-Active earbuds. Same great calls, same great sound and a fit like no other, now with the addition of Jabra's standard ANC solution, applying to music and media playback. This free upgrade is being made available to users through Jabra's engineering on Qualcomm technology. Taking advantage of the superior digital audio processor already available in Elite 75t and leading ANC know-how, Jabra has been able to deploy ANC in the existing product line.

The Jabra Elite 75t series will also be available to purchase with ANC as standard from October 2020. This means that both those who have an Elite 75t product, or are in the market for one, can experience Jabra's standard level of ANC; ensuring noise cancellation on lower frequencies.

The ANC enabled models will also continue to have IP55/IP57 rated durability, and a two-year warranty. With ANC on, battery will be 5.5 hrs on a single charge (24 hrs in total with charging case), and with ANC off it will be the existing 7.5 hrs and 28 hrs in total. Better still, the addition of ANC as standard adds no additional cost to the earbuds.

Find out more about Jabra at www.jabra.com/elite85t

How Would You Start a New AV Company?