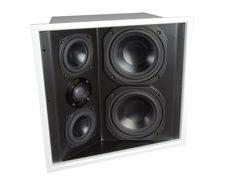 Based on demands from professional integrators for an optimized high-performance architectural speaker utilizing an angled baffle, the FXA Series excels in environments where balanced coverage is difficult to achieve. "We had numerous requests for a premium grade architectural speaker that offers clarity and detail along with exceptional dispersion throughout an expansive area," explained James Loudspeaker Chief Marketing Officer Ted Telesky. For home cinema applications, the FXA series makes an outstanding L/C/R and/or surround solution for in-wall or in-ceiling, allowing downward coverage adhering to the specifications required for Dolby Atmos, Auro-3D and DTS:X.

Two Versions
Within this new lineup, two choices of tweeter are available. Models with a single beryllium tweeter, used for the ultimate in high-fidelity performance and as well as timbre matching to the James BE Series speakers, are simply referred to FXA Series. Also available are versions that utilize the James proprietary Quad Array Tweeter, featuring four 0.75-inch aluminum dome tweeters delivering wide coverage and high output. These models, adorned with the FXAQ moniker, are timbre-matched to James QX and QXC models. Each FXA and FXAQ speaker features dual 3-inch midrange transducers (angled at 30 degrees towards the listening area) and two 5.25-inch woofers (angled on the adjacent baffle at 20 degrees toward the listener) to provide rich, accurate bass response. The woofers are designed with aluminum cones, Santoprene surrounds and die cast baskets for use in outdoor/marine environments. Enclosures are constructed of aircraft/marine-grade aluminum and include aluminum white paintable grilles. 70-volt versions and custom colors are available upon request.