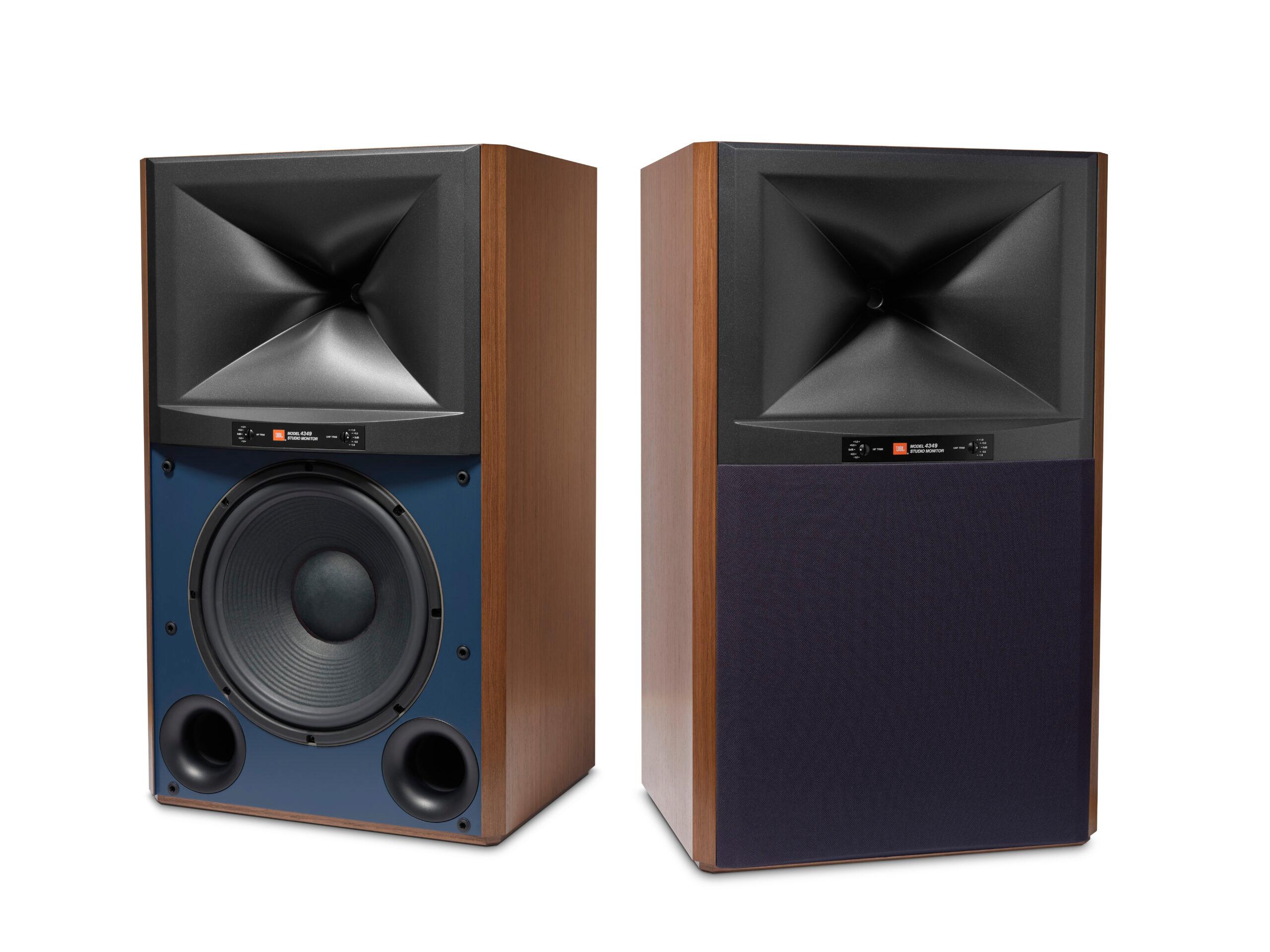 It may look like a blast from the past, but JBL’s retro-inspired 4349 studio monitor comes packed with the company's new compression driver and HDI waveguide. 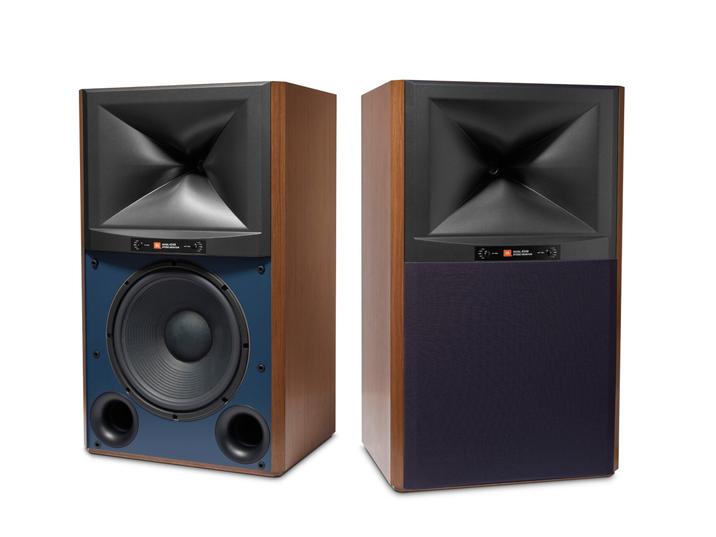 About two years ago JBL introduced the L100 Classic (reviewed here), a modern version of the 1970 L100 speaker complete with Quadrex foam grille. Seeing the updated version of the speaker from the iconic Memorex ad was pretty cool, and apparently I'm not alone in feeling that way. The L100 was a hit, and JBL released more in its series of new speakers based on iconic designs but utilizing new technology. The JBL 4349 ($7,500) is a large stand-mounted monitor with an exposed horn that takes up the top third of the cabinet. It can be had in either a Black Walnut Wood veneer with a black grill or a Satin Walnut Wood Veneer with a blue grille. Go with the Satin Walnut Wood Veneer if you want to maximize the retro styling impact. 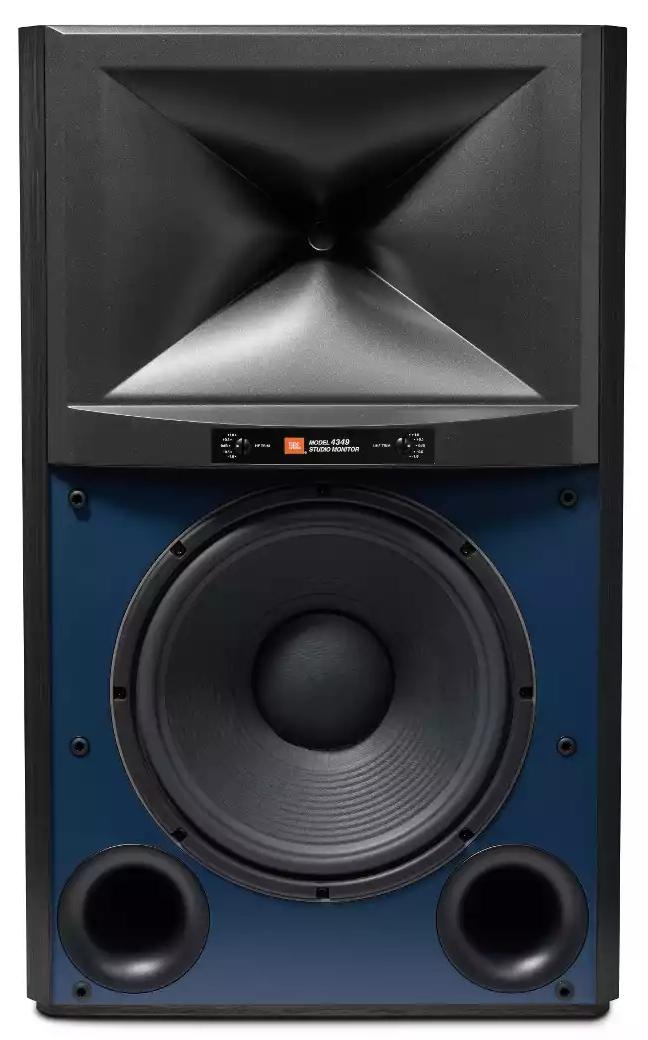 Whichever finish works for you, it's the large, black, molded composite horn that is likely to get your attention when you first see it. The horn is JBL’s new High-Definition Imaging (“HDI”) waveguide, which houses a new 1.5-inch dual-diaphragm compression driver. The bottom of the horn has a panel with high-frequency and ultra-high-frequency trim controls. The grille covering the bottom of the speaker hides a 12-inch woofer and a pair of front-firing ports. The cabinet measures 29 inches high, 17.5 inches wide, and 13.5 inches deep, and weighs in at a solid 83 pounds. The fit and finish of the veneer is nicely done, and the underlying MDF cabinet is solid and well braced. The specifications provided by JBL state the nominal impedance as 8 Ohms, with 91 dB efficiency. Frequency response is rated at 32Hz to 25kHz (±6dB).

Before I move on to discussing setup and listening, I wanted to discuss the D2415k compression driver. It's based upon the D2430k used in the highly regarded M2 speaker system but uses dual drivers half the size as in the M2. The ring-shaped polymer drivers use a “V” shaped geometry said to reduce breakup modes. This new driver is paired with the HDI horn, which acts as a large waveguide to provide an optimized dispersion pattern. The Sonoglass composite material used for the HDI horn is dense and sonically inert.

Most of my listening was done with the 4349’s being powered by the Naim Uniti Atom. The 4349s need to be placed on a stand, so I paired them with the JS-120, a stand that works with several JBL speakers. The 4349s sit on the stands without any mechanical connection. 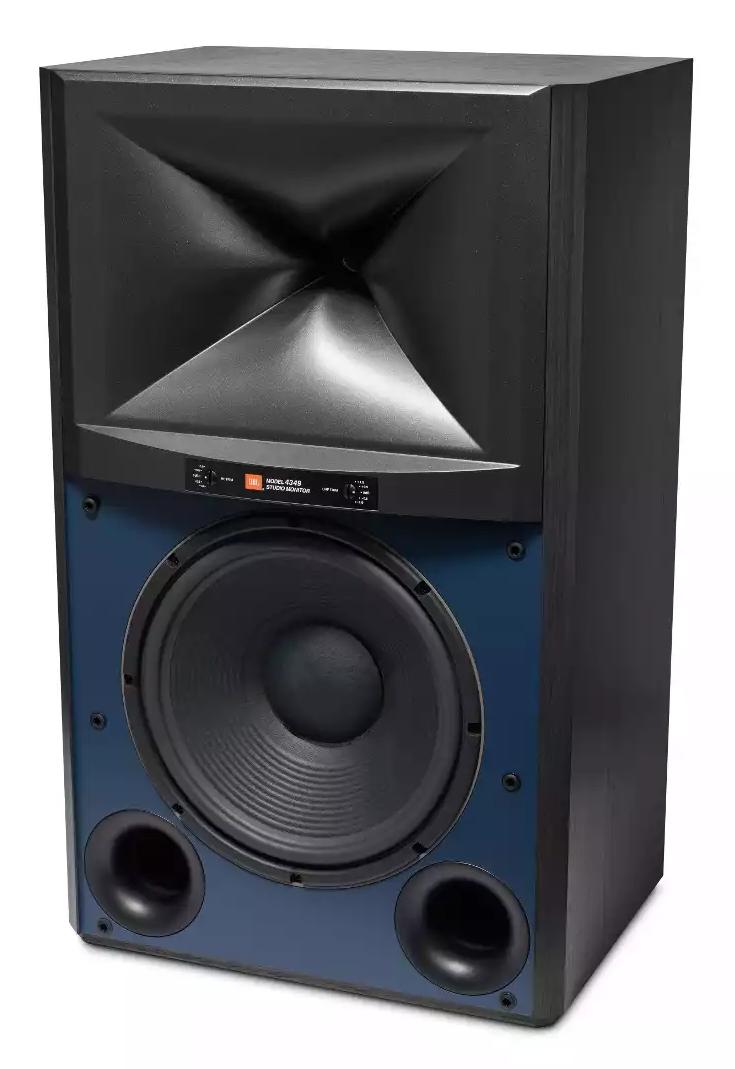 Joss Stone’s “The Chokin Kind” from her album The Soul Sessions (Tidal, Virgin) sounded a little thinner in the midrange than they did via the recently reviewed B&W 603 S2s or any of the Performa Be models from JBL’s sister company, Revel. The overall impression is that of a recessed midrange and more forward treble. I tried different settings of the trim controls and found turning up the HF adjustment helped even the balance a bit. The 4349 clearly surpassed the other speakers in terms of efficiency and clarity in the upper midrange and above, though. Whether mated with the modest Naim or a larger Krell amplifier, the 4349s played extremely loudly and cleanly. There were no signs of stress or breakup.

Paula Coles’ “Tiger” from This Fire (Tidal, Warner) provided a workout for the 4349’s 12-inch woofer. I know that some may be skeptical of a simple paper woofer, but the 4349 is proof that JBL remains capable of designing very capable drivers with more common materials. In this case, the relatively high crossover point means the woofer has to cover a wide frequency range. I found the bass notes to be full and powerful but lacking some of the detailed nuance I found in the recently reviewed Revel F228Be and F328Be and Magico A3 speakers.

How does the JBL 4349 compare to the competition?

There are few stand-mounted speakers of this size that I can think of, so the likely competitors to the 4349 are other horn-based, retro-styled designs. Two come to mind right away: JBL’s own 4367 ($15,000) looks like an upsized 4349 but features a 15-inch woofer and the same compression driver utilized in the highly regarded M2. My limited listening experience with this speaker was very positive.

The JBL 4349 is a great mix of modern technology and old-school aesthetics. The combination of the all-new D2415k compression driver and new HDI waveguide provides incredibly dynamic highs, with fast transients and good imaging, while remaining extremely clean and free of distortion. While many “8 Ohm” speakers have significant impedance dips that make them harder to drive, the 4349 remained easy to drive cleanly and loudly. While I did not have any low-powered tube amplifiers to try out with the 4349s, I strongly suspect they would work just fine. The speakers never seemed to stress even modestly powered amplifiers, including a Russound MBX-Amp, which was able to drive the 4349 levels loud enough to make conversation impossible without yelling, despite putting out a meager 50 watts per channel.

While I was not personally a fan of the midrange dip, some of my friends who had a chance to listen with me were fans of 4349’s voicing. The wide dispersion provided by the HDI horn provided a wide sweet spot for multiple listeners. We all agreed that the combination of seemingly effortless dynamics, detail, and lack of distortion of the upper midrange and treble were impressive. If you are a fan of the classic studio monitor style but want to take advantage of the recent developments in speaker technology, the JBL 4349s are worth taking a close listen to.

JBL Cranks Up the Savings on Studio 500 Speakers