Our reviewer was impressed with the sound quality of the Control NOW's. The bass response was "surprisingly robust...and not overly colored or boomy" while the midrange and treble are "clear and open, and the transition from bass to treble is smooth." Furthermore, the elbow macaroni shaped design allows it to be located in many places within a room. 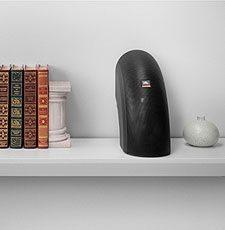 The JBL Control NOW loudspeaker (like its outdoor cousin, the JBL Control NOW AW all-weather speaker) has a unique design that facilitates its use in a wide range of placement situations. Its quarter-round elbow shape - picture a giant piece of elbow macaroni or an inner tube cut into four pieces - gives it two-end surfaces 90 degrees apart, enabling it to be mounted against a wall and ceiling, against two corners of a wall, or on a shelf. More than one JBL Control NOW can be linked together to create half-round, three-quarter-round and donut-shaped configurations (a group of four Control NOWs can be hung from the ceiling in the same manner as a ceiling fan). One or more JBL Control NOW speakers can also be mounted on a stand.

The JBL Control NOW measures fourteen-and-five-sixteenths inches high (when placed vertically; it can also be oriented horizontally) by five inches wide by nine-and-seven-eighths inches deep. It incorporates two four-inch JBL PolyPlas (treated pulp cone) woofers and a quarter-inch titanium-laminate tweeter mounted in a JBL Bi-Radial horn, a design that is said to optimize high-frequency coverage both on- and off-axis. Its frequency response is 80Hz - 30kHz, with a nominal impedance of eight ohms and relatively efficient 90dB sensitivity. The Control NOW (SRP: $249 each) is available in black, while the outdoor Control NOW AW (SRP: $279 each) comes in a white finish. Both feature attractive molded enclosures that feel substantial at six-and-three-fifths pounds each.

One look at the product literature indicates that the JBL Control NOW's designers gave thought to the fact that the speaker might be mounted either against a wall or in the open, and used either singly or grouped together. According to JBL, the speaker was designed to minimize the diffraction effects from room surfaces. The speakers have constant-directivity dispersion when wall-mounted and omnidirectional characteristics when mounted in a corner or arranged in a four-speaker circle.

In practice, it works. Whether placed against a wall or a ceiling or out in the open,
the bass response is surprisingly robust for a speaker that is rated at - 6dB at
80Hz, and the bass is not overly colored or boomy when the speaker is located on a wall, ceiling or corner. The midrange and treble are clear and open, and the transition from bass to treble is smooth. With dual four-inch woofers, the speakers aren't going to deliver kick-in-the-pants bass or play hard rock at paint-peeling volumes. On the other hand, they're ideal for the applications for which they're undoubtedly intended, such as whole-house multiroom music installations, background music in restaurants and stores, and as satellites when used with a subwoofer in a home theater system.

Low Points
• Since the bass rolls off starting at 80Hz, it should be used with a subwoofer for surround sound home theater installations.
• The four-inch woofers mean you're not going to be able to crank it up as much as a bigger speaker would allow.
• The pole-mounting bracket is optional rather than included (not a deal-breaker for users who don't want to pole-mount the speakers and who won't need the brackets).
• The speaker's unconventional design might not be for everyone.

Competition and Comparison
If you are interested in comparing JBL's Control NOW loudspeaker against its competition, be sure to read our reviews for Boston Acoustics SoundWare loudspeakers and the Klipsch RB-61 loudspeaker.  You can also find more information by checking out our Bookshelf Speaker section and out JBL brand page.

Conclusion
The JBL Control NOW is one of the few speakers to come along in recent memory that offers a genuinely new design angle (pun intended). It does what its designers intended it to - it delivers high-quality sound in a variety of installation situations. If you have the need, this speaker can be just what the doctor ordered.