Joe Satriani has a new concert film coming to movie theaters as well as Blu-ray. The concert film is in 3D, but what makes it truly unique is the Dolby 7.1 surround sound mix featured in the film. 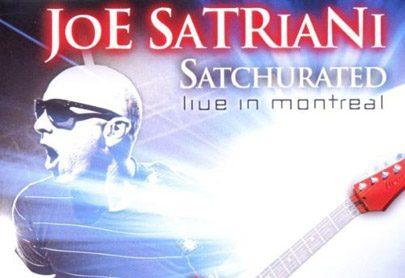 World-famous guitarist Joe Satriani is featured in Satchurated: Live in Montreal, the concert movie from award-winning directors and producers Pierre and Francois Lamoureux, coming to select theaters nationwide on March 1, 2012. Satchurated is the first concert film to be released in 3D and Dolby Surround 7.1. The 3D Blu-ray release scheduled for April will be encoded in Dolby TrueHD, delivering a studio master quality 7.1-channel surround sound.

The soundtrack makes use of the improved panning, sound localization, and enhanced definition provided by Dolby Surround 7.1's eight channels and four surround zones to deliver an immersive experience. Moviegoers will also get to experience Satchurated: Live in Montreal in select Dolby 3D technology-enabled theaters.

For fans who want to bring the concert experience into their living room, the Blu-ray release featuring Dolby TrueHD will provide a lossless multichannel audio soundtrack.
Satchurated was filmed live on the Wormhole Tour in support of Satriani's new album, Black Swans and Wormhole Wizards, at the Metropolis in Montreal, Canada, on December 12, 2010. Eight cameras captured the concert in both 2D and 3D.

Here's a behind-the-scenes look into the 7.1-channel soundtrack of Satchurated: Live in Montreal:

For more information about where to go to experience Joe Satriani in Satchurated: Live in Montreal, visit www.satchurated.com.

Five Tips to Successfully Set Up Your Blu-ray Player