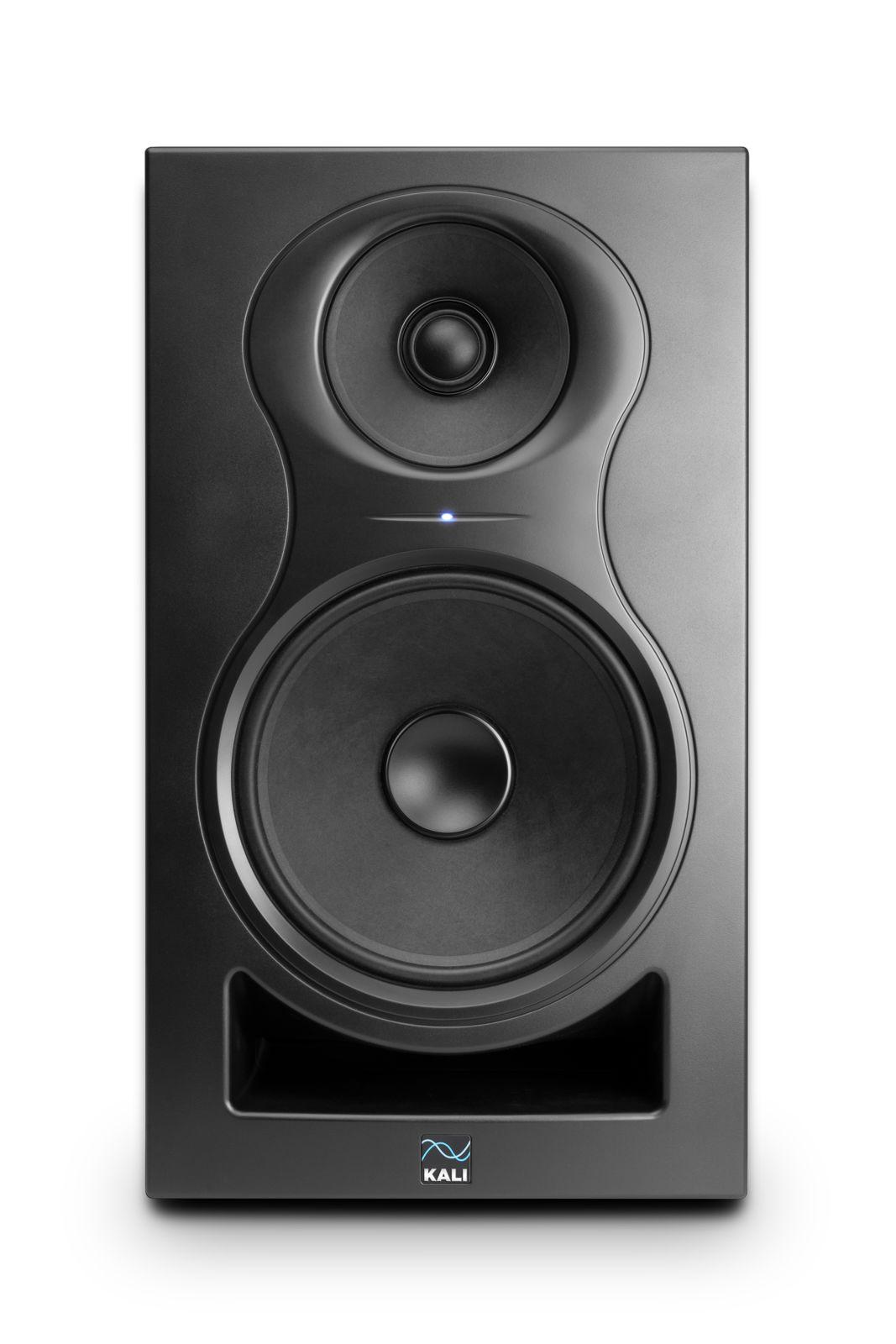 Studio Monitor Reviews, Bookshelf Speaker Reviews
Published On: August 23, 2021
We May Earn From Purchases Via Links

Designed to be studio monitors, the Kali Audio IN-8 V2 speakers are more about performance than aesthetics, but the performance is so good -- especially for the price -- the aesthetics almost don’t matter. 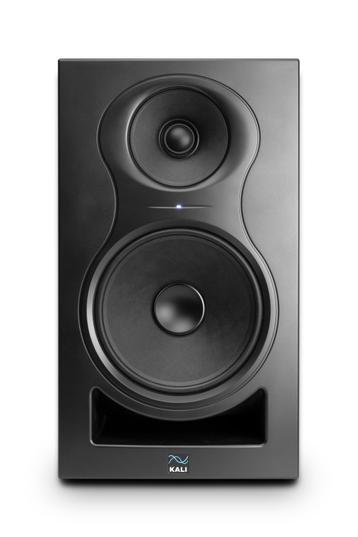 An ideal home theater speaker system fully conveys the original intent of the film’s creative team to your ears. But finding that 'ideal' system is somewhat of a Sisyphean task - it's the holy grail, the pot of gold at the end of the rainbow.

There are myriad reasons why this pursuit is difficult – cost, less than ideal room acoustics, troublesome neighbors, and HOAs – but that shouldn’t stop you from looking.

Kali Audio is working to make that dream a reality. For the unaware, a group of former JBL employees founded Kali, including the designer of the acclaimed JBL 3-series and 7-series, Charles Sprinkle. They began with the excellent LP series (Lone Pine, named after a California city east of Fresno) and have since upgraded to the IN series (or Independence, another city up route 395 from Lone Pine). It comes in two varieties – the IN-5 ($349 each) and the larger IN-8 V2 ($399 each), which I'm reviewing in this article.

Partnering the IN-8 in this review is a WS-12 subwoofer (named after the Watts Los Angeles neighborhood because of its importance to West Coast hip-hop) that sells for $599.

Disclaimer: I initially tried the IN-8 speakers before its second wave release. The 2nd wave version implements a new amp that virtually eliminates the self-noise hiss that was my main complaint with the first version (Kali says it’s a 12 dB drop, and I believe that number). I was lucky enough to have Charles Sprinkle guide me through a demo of the new version at Kali’s offices in Burbank, CA. My observations in this review combine that experience and my personal experience with the original IN-8 speakers.

Setting Up the Kali IN-8 Speaker

The Kali Audio IN-8 studio monitors are a bit on the large side compared to other traditional home theater bookshelf systems, measuring 17.75 x 10 x 11.25 inches (HxWxD) and weighing 23 pounds. The primary design focus of the IN-8s was definitely sound reproduction and not their look. I wouldn't say they are unattractive speakers, per se, but they’re far from statement pieces. The vinyl-wrapped MDF enclosure gets the job done, but not much beyond that.

As suggested by their name, there’s an 8-inch poly-coated paper low-frequency driver with a 4-inch poly-coated paper mid-range driver and a 1-inch textile dome tweeter. A front-facing port is positioned underneath the 8-inch driver and follows its contour along the top side. It’s brought over from their LP series design (for full disclosure, I use a pair of LP-6 for my editing and stereo monitoring of film and TV) and meant to limit any chuffing sound that you can hear from ports. Truth be told, I didn’t hear any extra port noise during my trial. The D class built-in amplifier supplies a total of 140 watts in a tri-amped configuration with 60 watts to the low-frequency driver and 40 watts each to the mid-range and tweeter.

Kali employs an interesting 3-way coincident design (also known as coaxial or concentric) that has the mid-range and tweeter in a compound configuration. The tweeter is located in the middle of the 4-inch driver so that they both share the same acoustic center and the mid-range driver actually acts as the waveguide for the tweeter. The benefit of this configuration is the virtual elimination of directivity issues with the high-to-mid crossover, which is set to 3,000 Hz.

There are, of course, challenges to the design. Since the tweeter is on top of the mid-range, the mid-range excursion (the distance it travels from neutral) needs to be limited to less than 1mm, so it doesn’t adversely affect the tweeter. But with a crossover between the mid and low-frequency drivers set to 280 Hz, the 4-inch mid-range doesn’t need to produce much low end (as it would in a 2-way design), and therefore doesn’t need to travel far.

To ease the setup of the IN-8, there are eight DIP switches for different speaker placements. There’s no need to break out a manual to determine what each one controls, though, as Kali has printed the boundary compensation EQ legend on the back of each speaker. The first three DIP switch combinations are for eight different speaker placement options, four through seven are for low-frequency and high-frequency trim (±2 dB), and the last is to turn the RCA connector on and off. Next to the DIP switches are three options for connecting the speakers to a source – the unbalanced RCA, balanced quarter-inch TRS, and balanced XLR. A volume pot can adjust individual speaker volume +6 dB or down to nothing. I kept the low and high-frequency response set to neutral.

Setting Up the Kali WS-12 Subwoofer

The WS-12 subwoofer is a beast, both in size and specs, for the price. The 20.5 x 17.2 x 19.2-inch sub (HxWxD) weighs 58 pounds and is a solid build – a good thing since Kali designed it for both studio and live use (there are even handles built into the side for carrying, and it would fit in most small cars). It has a 12-inch driver and incorporates the same front port design as the IN-8, although it is all behind a metal grille. The D class amp provides 500 watts continuous power (1,000 watts peak) and has a lower extension to 30 Hz at 3 dB down (23 Hz at 10 dB down).

Like the IN-8, there are three pairs of connections – unbalanced RCA, balanced TRS, and balanced XLR. The TRS and XLR are combined into one input jack. There’s an additional XLR output for pass-through to a stereo pair. The DIP switches on the back of the WS-12 control crossover, gain adjustment, polarity, RCA on/off, and standby on/off. Kali designed the WS-12 to work in conjunction with its other speakers, so the first two crossover DIP switch options indicate if it’s being used with LP-6 or LP-8/IN-8 speakers. A volume knob and an input for a footswitch bypass the sub – not a practical option in a home theater, but a nice plus for a mix studio setup.

The original IN-8 speakers produced a low-level of hiss that you can hear from a couple of feet. Once content is being played the hiss doesn’t adversely affect the sound, but in quiet moments you can hear it when close to the speakers. Luckily, Kali corrected this with the more recent V2 release.

The 2nd wave version implements a new amp that virtually eliminates the self-noise hiss (Kali says it’s a 12 dB drop, and I believe that number). I had my ear up less than an inch from the mid/tweeter and could barely hear any self-noise. It’s a remarkable improvement. The new drivers are also lighter and faster, which helps diminish the overall distortion – now less than 0.3% distortion above 400 Hz. With the IN-8 V2 speakers, the mix between the speakers was seamless, and even at loud volumes, there wasn’t any harshness or excessive presence.

A benefit of using the same speaker for all points of a surround system is the seamless blend between them. The TIE fighters chasing the Millennium Falcon across the Jakku desert in The Force Awakens pass from back to front without any change in coloration. There was an excellent clarity in spatial positioning for the ships flying around or the sounds of Stormtroopers and blaster fire throughout Niima Outpost. The overall wide soundscape impressively exceeded the spacing of the speakers in my living room – better than I would have expected from a $399 speaker. Through all of the action, no matter how full and erratic it was, the dialogue always cut through without sounding too pushed or forward. The way the mid-range handled dialogue was the most impressive aspect of the IN-8s.

The WS-12 shone with everything I watched and paired very well with the IN-8s. Instead of just adding a bunch of low-end boom, the WS-12 had specificity and nuance. The IN-8s have a decent amount of bass response thanks to the 8-inch driver, but with the WS-12 in the mix, there’s plenty of rumble to explosions without it feeling like the bass is out of control.

To see how the IN-8s worked as a two-channel system, sans sub, I pulled out my vinyl copy of David Bowie’s final studio album, Blackstar. I find it an emotionally difficult album to listen to, considering its subject matter (Bowie wrote and recorded the album knowing he was dying of cancer), and it is equaled by its musical complexity and depth. Away from the lyrical hits of his early and mid career, Blackstar is a beautiful jazz fusion amalgamation of sound and emotion that beckons the listener to sit and allow the sonic atmosphere to wash over them. It’s the last bit of genius Bowie imparted before departing this mortal coil. It demands speakers that deliver clarity.

The IN-8 delivers that clarity. Even with just two channels, the soundscape in the title track is wider than I would have expected and the placement of drum rhythms and saxophone squawks swirl around Bowie’s central voice. There’s an edge to the processing on his vocal track that the IN-8 highlights. In contrast, on the moody “Lazarus,” there is more purity to his voice that hints at the journey he’s been on and perhaps the toll it has taken. Even without the WS-12 in the mix, the bass response is substantial and adds a solid foundation to the instrumentation above.

How Do the Kali IN-8 V2 and WS-12 Compare to the Competition?

There aren’t really any speakers out there that compare directly to the Kali Audio IN-8 V2 – three-way coincident monitors, especially for $399 each, are rare.

Plenty of two-way powered options exist, such as a few from Audioengine, Kanto, or Aperion Allaire that are comparable in price, but they’re generally limited to two-channel setups. And, even though they either include a subwoofer or can have one added, there’s no comparing the low-end performance of a small bookshelf speaker like the three mentioned with the IN-8.

Buying a set of studio monitors for a home theater setup isn’t the first thing that comes to most people’s minds. The Kali Audio IN-8 V2 certainly won’t win an award for aesthetic design, but they can easily hold their own against speakers twice the price – and more. I found that I was completely invested in what I was watching with the IN-8 speakers and WS-12 subwoofer. I can’t think of a better compliment.

Are there faults? Sure. They’re a bit large (especially for a smaller room), and unless you already have aptly located outlets, getting power to the IN-8 surrounds could be tricky. Still, if you’re chasing the perfect representation of a film’s sound and need to do it on a budget, the IN-8s deserve a listen.