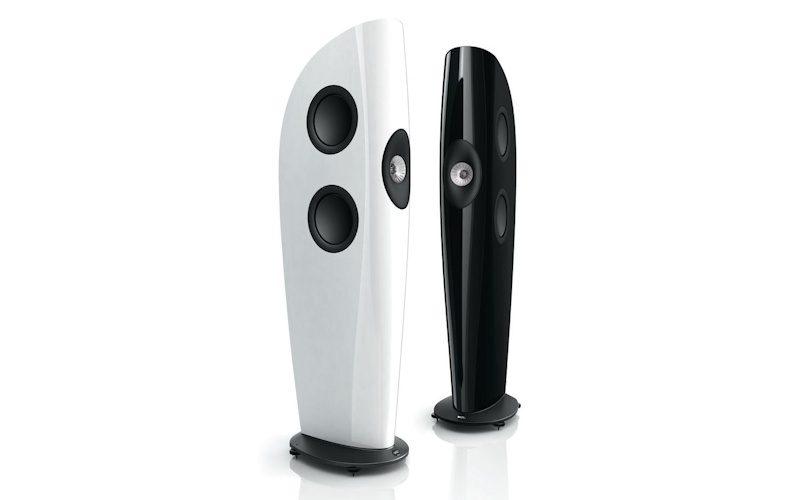 Introduced in 2012, the KEF Blade was the product of five years of painstaking research and development. Utilizing computer aided design, finite element analysis, custom-designed software for driver development, and real-world listening tests, KEF created one of the first, and... 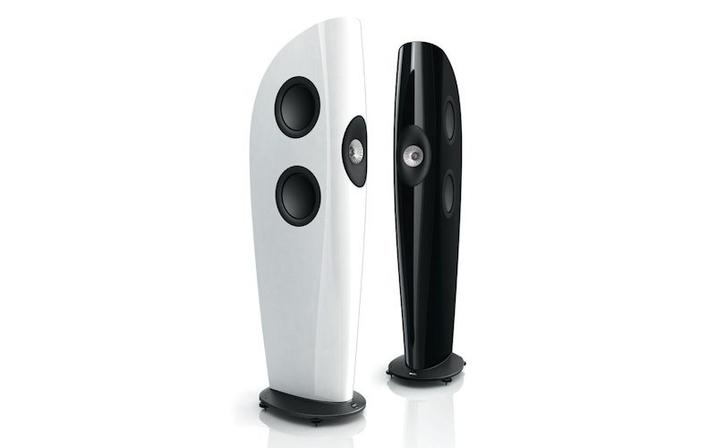 Paul Wilson has been an avid high-performance audio enthusiast since 1972, and has experience in all aspects of the market, from sales to business to journalism. He has been a member of the AudiophileReview.com and HomeTheaterReview.com teams since 2013, contributing regular commentary about the audiophile hobby as well as extensive gear reviews. His passions include sports, sports cars, collecting watches, art, cooking, and listening to finely recorded music. Introduced in 2012, the KEF Blade was the product of five years of painstaking research and development. Utilizing computer aided design, finite element analysis, custom-designed software for driver development, and real-world listening tests, KEF created one of the first, and most recently available full-range point-source speaker systems. The Blade shares with most of the KEF product line the concentric driver design called Uni-Q - a one-inch tweeter mounted inside a three-inch midrange driver. KEF also incorporates a "Tangerine Waveguide" to help dispersion of the midrange and higher frequencies. The Uni-Q surround is sloped back to smooth out audio waveform dispersion. Two pairs of side firing woofers reside above and below the front mounted Uni-Q driver. Each pair of woofers is mounted in its own discreet, internally partitioned chamber. There are two rear ports, one for the upper pair of woofers, one for the lower.

At first glance, a review of a seven-year-old speaker might seem unusual. Simply put, though, due to the continued popularity of the speakers, not to mention the fact that speakers don't age in quite the same way electronics do, we felt the Blade deserved a spotlight on HomeTheaterReview.com.


Two sets of high quality WBT terminals located on the back of the cabinet just above the bottom plinth accept both banana terminations as well as fork terminals under screw-down posts. Having two sets of terminals allows for bi-wiring, and if only a single set of cables are used, jumpers are factory installed to ensure full-range performance. For this review, I removed the factory installed jumpers and used Nordost Valhalla 2 jumpers. KEF also supplies a footer kit that includes spikes for carpeting, as well as flat, felt-bottomed discs to be used with the spikes on hardwood, or any surface the user does not want scratched. Thumbwheel adjustments are used to mount the spikes to the plinth. I tried both the factory supplied footers, as well as a set of IsoAcoustic Gaia I footers.

Because there are almost no flat surfaces on the speaker, a convenient round bubble level is mounted in the plinth at the back of the speaker. This makes it very simple to see when the speaker is standing straight. I found that adjusting the rake angle forward about two degrees from perfectly level really locked in the overall presentation. Powering the Blades was an Esoteric A02 fully balanced, dual mono stereo amp rated at 400 watts per channel continuous output into 4 ohms, which is the speaker's operational impedance. Speaker cables were Nordost Odin 2. KEF's goal was to not only create a full-range point-source speaker system with the Blade, but also one more forgiving on the listener. Their intent was to improve off-axis imaging so there was less dependence on the sweet spot. Sonically, the Blades do a very impressive job of delivering a convincing soundstage to not only the sweet spot listener but also someone sitting to the left or right. A properly acoustically treated audio room could very well further enhance the off-axis presentation. I found that precise micro adjustments to the side walls and front wall vastly improved the sonic character. Instruments seemed to float in their own space and there was a real sense of a black background for each one. While toe-in is recommended, I discovered foregoing toe-in widened the soundstage and improved the imaging. Naturally, this is very room dependent.

Mounted rigidly back to back, the two pairs of woofers take advantage of a bit of Newtonian physics - each woofer actually cancels out the vibrations of the other, leaving a very neutral, inert cabinet. Play music as loudly as you like, place your hand anywhere on the cabinet, and you feel, well, nothing, despite the speakers low-frequency response of 28 Hz (-6 dB).


Musically, the Blades can be very revealing. In "Rolling In The Deep" from Adele's album 21, there is a very faint male voice that can be heard in the first five seconds of the track. I have heard this song numerous times on quite a few systems and I can recall very few occasions when that level of detail on that portion of the song was audible. As the song progresses, a perceptible change in the dynamic range is plainly evident and comes and goes throughout the song. The portrayal of the bass line was tight, powerful, and very clear. As is common with these speakers, imaging is pinpoint with the background singers distinctly imaged to the left of the soundstage and drums imaged in the middle and to the right. Adele is squarely in the center.


When I played "Dialogue (Part I & II)" from Chicago V, Terry Kath's and Peter Cetera's back and forth lead vocals were both imaged slightly behind and just beyond each speaker – Kath to the left and Cetera to the right. Towards the end of Part I, when the tambourine comes in, there was almost a startling level of dynamics in its portrayal.

As Kath and Cetera continue to trade lead vocals back and forth, their position as imaged on the soundstage never changes. As the rest of the band takes turns singing backup, they can be clearly and distinctly heard. The horn section, namely the sax, trumpet and trombone, can all be individually recognized.

Playing Lisa Loeb's "Firecracker" from the album of the same name gave me an unbelievable sonic picture. I cannot remember any song in my music library with imaging so complex, so precise, and so interestingly portrayed. Percussion darted from left to right, and while I was trying to focus in on that, I was also concurrently tracking guitars, drums, and bass. It was like I was seeing the performers on the stage.

Looking to test the Blade's bass response, I played "Song 6" from Daniel Powter. This is one of my go-to songs for bass because at the 45 second mark, there is a very, very low 30 Hz bass note. While the Blades did not reproduce this note absolutely cleanly and distinctly, they did reproduce it well enough to make the sound very convincing and powerful. To fully reproduce this note, subs would almost certainly be needed.

Something perhaps all too uncommon, the Blades imaged higher than many traditional speakers. Imaging ranged from just above the floor to a height just above the Uni-Q driver. In my setup, this was about five feet in the air. This also helps in recreating a more lifelike presentation. And because of the internal cabinet volume, this is a speaker system that likes power. The Blade does have a modestly impressive 91 dB sensitivity and is rated for a minimum of a 50WPC amp. However, and depending on the actual amplifier, I would hesitate to use less than 200WPC to prevent amplifier clipping - especially if music is to be played loudly. The Blade is rated for a maximum output of 114 dB.

Coupling four nine-inch woofers to a three-inch midrange and one-inch tweeter is a difficult task. Because of compression, the highest frequencies struggled at times to maintain the same dynamic levels as the low frequencies. This is a phenomenon common to most any D'Appolito dynamic speaker. Overall, though, the Blades are a very musical speaker system. Soundstage and imaging are both very impressive. There is a richness and a naturalness to the sonic presentation, making this a very easily listenable speaker system. Closing my eyes and relaxing with the music almost made me feel like I was not listening to a stereo at all. I found they played all types of music equally well and could capably play as loudly as I wanted, more so in fact.

Comparison and Competition
At a retail price of $32,000 per pair, The Blade has plenty of competition from which to choose. While slightly more expensive at $39,999, the Focal Scala Utopia EVO is a very close competitor. Like KEF, Focal builds their own drivers and utilizes proven technologies such as their beryllium tweeter, their "W" woofer configuration, and a tuned mass damper suspension. Both are very well-designed speaker systems.

Another speaker also with side firing woofers are the Vivid Gaya speaker lineup. Pricewise, the Gaya G4 is closest to the price of The Blades at $30,000 per pair. I have heard the Gaya line of speakers on numerous occasions and can attest their sonic character reminds me of what I hear from the Blades. HomeTheaterReview.com also reviewed the Vivid Audio Kaya 90 floorstanding speaker, which can be found here.

However, I see The Blades as very capably punching above their weight class. I've heard $60,000 speaker systems I didn't think sounded any better. In fact, I suspect had KEF originally set the list price twice as much as it is, I think they would have still been a popular speaker.

Musically, there is a whole lot to love about The Blade. However, extracting that musicality does require the use of a higher-powered amp. I would not try pairing them with a 12-watt SET tube amp. They also really shine with hyper-precise distances to boundary walls. In my setup, I was no more than a millimeter of difference in the distance between the two speakers relative to the side and the front walls. This is a frustrating thing to accomplish because there are almost no flat surfaces on the cabinet, thus making precise measurements difficult. KEF weighed dealing with internal acoustic issues against outward aesthetics and not surprisingly, internal vibrations won. Consequently, a more difficult setup is the result. My other wish would be a better and more contiguous approach to dynamic linearity, or equal dynamics from the highest note to the lowest.

Conclusion
By any measure, The KEF Blade is a sonic tour-de-force. It is a highly musical speaker system and one that images like few other D'Appolito systems can or do. The Tangerine waveguide ensures a wide dispersion of the signal and helps improve off axis-imaging - thus making group listening more enjoyable. The two pairs of woofers mounted back-to-back in a force canceling configuration provide deep, clean, precise bass response. While they are not intended for a budget audio system, when paired with likewise quality electronics and cabling, the KEF Blades are a tremendous speaker system with decided value for an upper-level audiophile system.