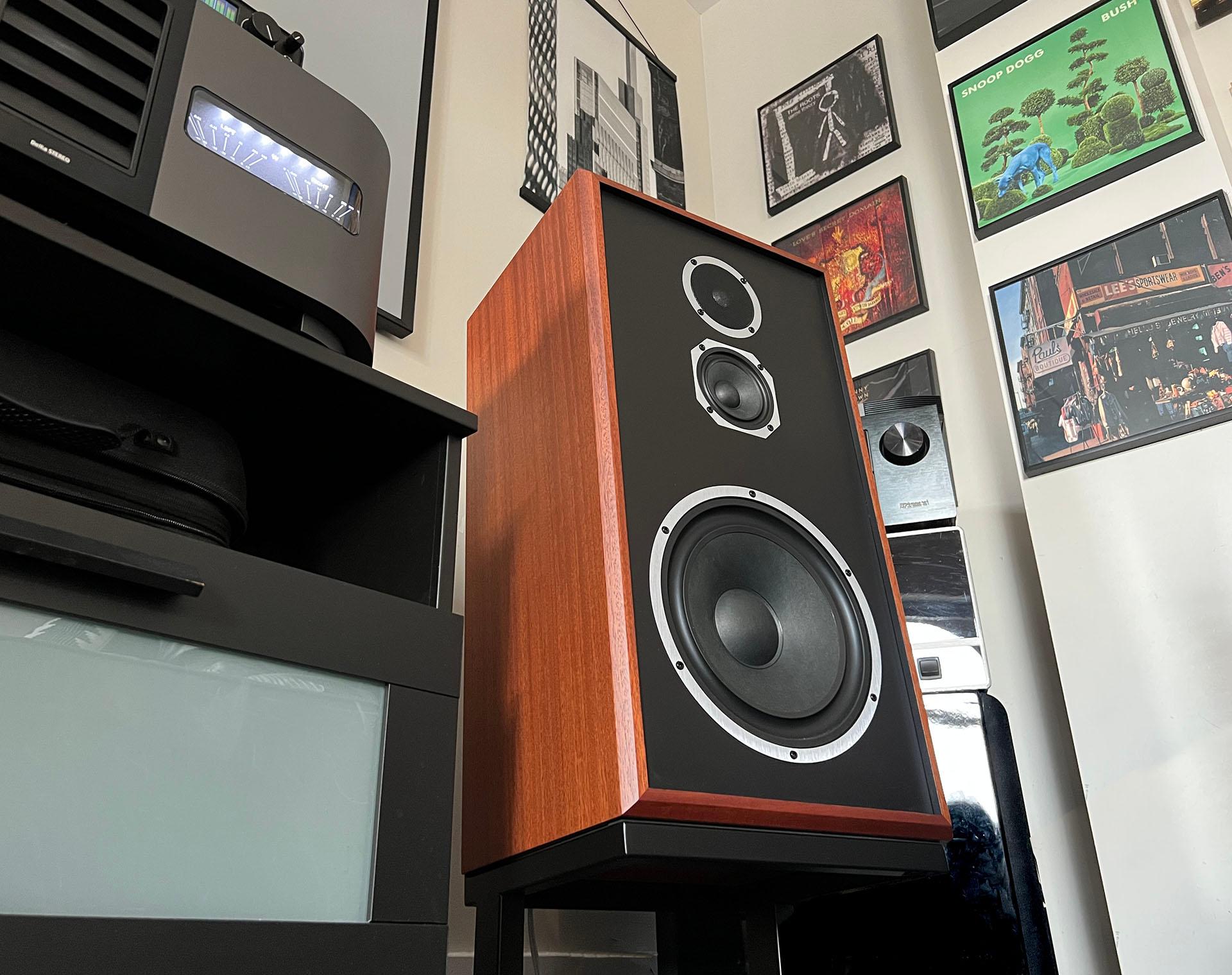 Floorstanding Speaker Reviews, Audio and AV Equipment Reviews
Published On: February 25, 2022
We May Earn From Purchases Via Links

When old school meets new, the result is a speaker that takes care of business. 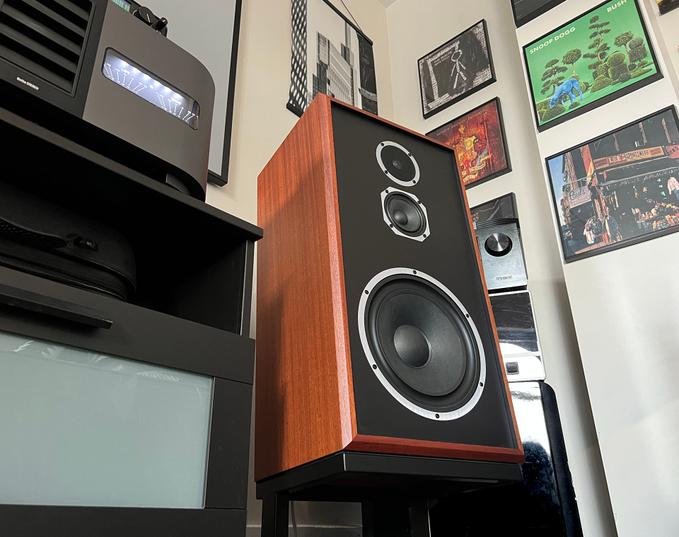 The new KLH Model 5 is a rebirth and reinvention of a classic speaker originally released in 1968. The new Model 5 came out this past spring and is visually familiar, with good looks and a form factor that has stood the test of time.

Looks are part of the Model 5's appeal, but the real distinguishing characteristic of the new Model 5 is the acoustic suspension 3-way design, which is a bit of a throwback in a world where bass-reflex (i.e. ported) speakers dominate, especially when it comes to floor standers. Rather than a tower, the Model 5 looks like a gigantic bookshelf speaker that rests upon a tilted stand.

I was among the first people to ever see the Model 5, back when it was first shown at CES 2020. KLH is fully transparent about the design and the components contained within this speaker, which are fully modern. There was even a chart breaking down the differences, like the switch from a 1.75-inch paper cone treater to a 1-inch aluminum dome, the use of a single midrange driver, instead of dual midrange drivers on the original. It's a story of improved modern components, but also of a speaker design that is so fundamentally "sound" that the performance of the speaker, equipped with modernized crossover and drivers, delivers a true state-of-the-art listening experience, despite a form factor that is over 50 years old.

One feature on these speakers that you don't often see is a switch to adjust the output of the mids and highs. It has a slight but noticeable effect on the high-frequency response that could be used to compensate for room acoustics or account for personal taste, but for the sake of this review, I left it in the "Mid" position. But with the inclusion of this feature, you can neither accuse these speakers of being too bright nor too warm because you can quite literally choose between these options or neutrality.

In my current living room setup, which incorporates a UST projector, the 34.25-inch height of the speaker plus base works better than tall tower speakers because they don't block the screen when positioned optimally. With tower speakers, I wind up having to space them a tiny bit too wide, a little bit too close to the wall, so that the tops of the speakers don't block the screen. I love how when you place a pair of Model 5s in an optimal position for listening, they rise to the task aesthetically and look "just right" in a living room setting.

I prefer the appearance of keeping the grill off, but for a more understated look, the included grills feature either "Old World Linen" to match the Mahogany veneer finish, or “Stone Wash Linen” that is meant to the English Walnut veneer finish. The pair I reviewed came with the mahogany veneer finish. KLH also sells the grills separately at $199.99 per pair, in case you prefer the lighter fabric with the darker wood finish or vice versa.

There are several sources of reputable measurements that I relied upon to correlate against my subjective experience. Of greatest interest, the KLH Model 5 was measured by Soundstage at the NRC anechoic chamber, located in Canada but there are also some basic measurements in Stereophile. Overall, the speakers measure in line with the specifications, always nice to see.

One thing about an acoustic-suspension design is there's no port tuning frequency below which roll-off is a cliff, and this can be highly relevant when you factor room gain into the equation, it can significantly extend what is perceived as a flat bass response, especially if the speakers play well with the listening room. These speakers are also very accommodating of room correction EQ in the bass region and under favorable conditions, you should be able to extract more frequency response range than the specifications promise.

I am always one to recommend adding a subwoofer to a system, and these speakers are no exception. But adding a subwoofer doesn't mean the excellent bass response goes to waste, in fact, it's the opposite: The Model 5's extended response below 80 Hz allows for a proper crossover to the subwoofer, and with a carefully tuned system you can get profound true full-range sound.

It is my suspicion that the midrange on the Model 5 deserves a lot of credit for the agility that the speaker displays. I say this because it is a relatively small diameter in the grand scheme of midrange drivers, but with a huge motor. This is important because the smaller driver will have favorable wide-dispersion characteristics. While using a smaller cone comes at the cost of maximum output, these speakers don't need a larger midrange to keep up with the tweeter or the woofer, the components are balanced in capability.

It is the optimal pairing of that midrange and the tweeter that is clearly responsible for how well these speakers image and how delicately they can treat musical nuances.

My goal in reviewing any AV gear including speakers is to find the good stuff, not to waste time describing mediocrity. These speakers are the good stuff, I challenge anyone to have a seat and listen to some of their favorite tracks and not be completely impressed by the presentation. It's the totality of the performance that makes these speakers an outstanding option for the sort of two-channel stereo system that you're proud to have in your living room.

I further promise you are not going to be the only one who loves their new Model 5s. When guests see your speakers, they will actually ask you to play some of their favorite music. I promise, this will never happen to you with a pair of generic tower speakers, there's something about the KLH model five that quite literally screams "Hey, don't you want to hear some awesome music?”

I totally get that there are people out there who enjoy super loud music. These speakers will play pretty loud, certainly reaching levels appropriate for emulating the experience of a live performance. Modest sensitivity is a compromise of the design, a result of some basic physics: Speakers designed for home use for the most part have sensitivity that's defined by the woofer, not the midrange or tweeter. KLH specs claim an in-room max SPL of 112.3 dB, and I was indeed able to achieve those levels with the system I tested, thanks to the huge power reserves of the Classé amplifier.

I couldn't possibly list all the albums that I listened to through this system, I left it connected as my main rig for weeks on end, and I listen to music continuously, from 5:00 a.m. until late in the evening typically, and I often spend a few minutes sitting the sweet spot, in order to appreciate a tracker two. But what I will say is this: I've spent a few years with a pair of GoldenEar Triton Seven speakers as my main stereo pair.

Granted, the KLH Model 5 is the more expensive speaker, but it also turns out to be the superior speaker, and by a significant margin. Whether I queued the new album Rainbow Brain by Griz, or KMFDM's KMFDM in Dub, or Brian Eno's '90s electronic classic, Nerve Net, what I heard from the KLH had greater clarity and neutrality—and dare I say it given that imaging is what GoldenEar is all about—the imaging from the Model 5s was subjectively superior in precision and depth. In other words, these KLH represent an audible upgrade from my "daily driver" speakers and achieve it with more interesting aesthetics, while fitting into my AV setup better. It's a true win-win, and I appreciate truly appreciate what can be achieved with this old-school speaker design.

One of my favorite listening experiences is an early 1990s industrial classic, Love's Secret Domain by Coil. If you give it a proper listen, the artistry contained within is quite astonishing and furthermore, the production value is top-notch and very creative. A good pair of speakers, set up for proper stereo, will transport you into 3-dimensional audio wonderlands cooked up by masters of the art form in the early days of sampling and sequencing. Speakers that do it justice, like these KLH, earn a special spot on my recommendation list.

Listeners who are not in love with electronica like I am, are still going to love what these speakers can do. I fed them the Cowboy Junkies' cover of "Sweet Jane" from The Trinity Sessions, a track that impressed me back in the day when I was first getting serious about high-fidelity sound. It's a gorgeous recording made with a single microphone in a church, and I now have 30+ years of experience listening to with every system I've owned. And here's the contradiction... a "classic" speaker delivers one of the best renditions I've heard of the track, which depends so strongly on getting the basics right, vocals, drums, acoustic guitar, and the ambiance of the space captured in a live recording. Every time lead singer Margo Timmins says "sweet" a lesser speaker will cause a slight wince from sibilance, but the tuning of the KLH is such that it registers as it should, momentarily sharp in tone, with a clear emphasis not found in the pronunciation of letter s in other words in the track, but also not exaggerated or artificial.

A quick impedance measurement with the DATS 3.0 system shows an easy-going curve that translates to most amps—including AVRs—being able to drive these speakers without issue. The absolute lowest measured impedance is 3.5 ohms at 140 Hz, exactly as the specs describe. And based on the overall graph, the listed nominal impedance of 6 ohms looks to be spot on (rated impedance is always a guesstimate of sorts).

It only took a few watts to get these speakers singing at a satisfying level. And they exhibited excellent linearity so even at low volume levels, the full dynamics are present. I found it fascinating to use a high sensitivity stereo microphone to amplify the output of the speakers as they played really quietly and it sounded just as if I have the volume turned way up, including details that were otherwise inaudible to my unaided hearing. This is simply to say, the speakers are able to reproduce nuances of such subtlety that they flirt with the threshold of what is perceptible, and yet, when put under the equivalent of an audio microscope, it's all there.

There's nothing to overthink with the new KLH Model 5. The question is simple: Does an updated version of this classic design deliver the goods? The answer is unambiguous: Yes, this is a music lover's speaker system that looks and sounds fantastic, earning it a Home Theater Review Editor's Choice award.