The Klipsch Image ONE headphones is an over the ear design. While the Klipsch performs admirably, there are several drawbacks that may keep it from being the headphones you walk away with. 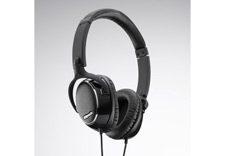 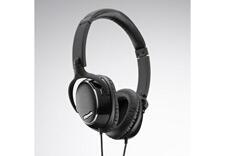 Klipsch‘s product library is one of the most diverse among all consumer electronics manufacturers, offering up everything from cost-no-object loudspeakers to desktop computer speakers and everything in between. So it should come as no surprise that Klipsch offers several different varieties of headphones, from in-ear designs to the on-ear Image ONE reviewed here. At $149.99 the Image ONEs are not Klipsch’s flagship effort – that title belongs to the Image X10i In Ear Headphones, though it is their most expensive over-the-ear design. Not only is the Image ONE the most expensive over-the-ear design Klipsch offers, it’s the only over-the-ear design they offer.

In terms of looks the Image ONE isn’t going to earn any design awards for it’s outward appearance is rather status quo, which may be one of its biggest selling points, what with all the brash “look at me” headphones available today. The Image ONE trades Hello Kitty graphics for semi-gloss plastics and leather, giving it a more subdued, adult flare. The Image ONE is lightweight compared to comparable headphones weighing in at 138 grams or just over a quarter of a pound. The Image ONE employs the use of two (left and right) 40 millimeter, full-range drivers, giving the headphone a reported frequency response of 16Hz to 23kHz. The Image ONE has an input impedance of 32 Ohms and a sensitivity of 110dB making it easy to drive from virtually any portable device including iPhones and iPads, which is not always the case with other headphones. The Image ONE has a three and a half millimeter input connector as well as mic and three button remote on the headphone cable itself which allows you to adjust volume as well as receive phone calls when using the Image ONEs in conjunction with a smart phone.

The Klipsch Image ONE on-ear headphone

In terms of sound, the Image ONE are a bit of mixed bag for me, for within their limits they possess a rich, slightly warm sound that is punchy with good nuance and air. However, turn the volume up just a notch above ideal (the Image ONE’s ideal, not yours) and they become flat, shouty and one-dimensional. Furthermore, the Image ONE’s ear cups are comfortable but are too small for long term listening. I have small ears and the foam surrounds rested squarely on my outer ear lobes versus encapsulating them. Because of this their sound isolation ability is average to below average at best.

Read about the high points and low points of the Klipsch Image ONE on Page 2. 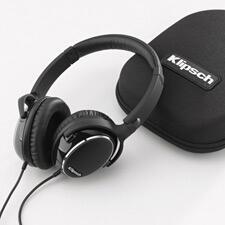 High Points
• In an era of headphones that are designed to
appeal more as a fashion statement than an aural one, it’s nice to see that Klipsch has gone back to
basics with their Image ONE headphones.
• The Image ONE is lightweight, portable and comfortable for all but the longest of listening sessions.
• The Image ONE’s ability to interface with today’s modern smart phones is a huge plus and no doubt a convenience for many.
•
Within its dynamic limits, the Image ONE is a fine sounding headphone,
one that is easy to drive and should provide for years of trouble free
listening.

Low Points
• The Image ONE’s lightweight
design and portability comes at the expense of long-term comfort for the
ear cups are too small and sit awkwardly on ones ears – at least this
reviewer’s ears.
• When driven to play louder than what they’re
capable of reproducing, the Image ONE headphones completely fall to
pieces, becoming shouty, flat and harsh.

Competition and Comparisons
There
are a number of worthwhile headphones at or around the Image ONE’s
asking price, both in terms of over-the-ear as well as in-ear headphone
designs. For starters there’s Bowers & Wilkins P5 headphones,
which retail for $299.95 but possess superior sound quality and
ergonomics compared to the Image ONE. Another worthy competitor is Sennheiser’s HD 205-II headphones,
which at $79.95 are less expensive than the Image ONEs yet tick more of
the boxes in terms of comfort, isolation and sound quality compared to
the Image ONE. Where the Sennheiser’s drop the ball is in their smart
phone compatibility, which may or may not be a deal breaker. If you’re
not partial to over-the-ear designs but wish to retain some smart phone
compatibility, then Bowers & Wilkins’ new C5 headphones are definitely worth a look at $179.95.

For more on which headphones are right for you including the latest news and reviews please check out Home Theater Review’s Headphone page.

Conclusion
At
$149.99 the Image ONE from Klipsch has a lot going for it though it’s
far from perfect. If you’re one to listen to well-recorded, perhaps
self-ripped, digital music at moderate levels, then the Image ONE is
going to be ideal for you. However if you have a few less than stellar
recordings in your arsenal and occasionally like to pretend you’re 16
again and listen loud enough to annoy your parents, then I urge you to
stay away from the Image ONE. Regardless of your musical tastes the
Image ONE’s do have some pretty small ear cups, which calls long-term
comfort into question. The Image ONE is worth your consideration and an
in-store audition but I’m not sure, if presented with other options
nearby, that the Image ONE’s would walk away the winner.