There's been a movement to simplify AV setup for quite some time. Many consumers want better sound quality than they get from the speakers built into their TV, but they don't want a whole set of speakers plus an audio... 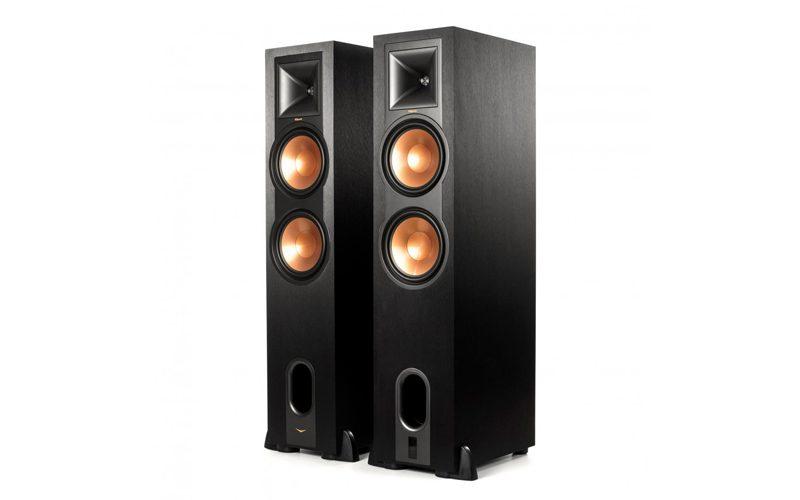 There's been a movement to simplify AV setup for quite some time. Many consumers want better sound quality than they get from the speakers built into their TV, but they don't want a whole set of speakers plus an audio receiver; so, they end up choosing a soundbar instead. Powered speakers fall in a similar category, as they at least remove the need for amplification.

Klipsch's new R-28PF speaker package goes one step further: retailing for $1,200/pair (but with street prices closer to $900/pair), this package combines a pair of powered tower speakers with simple preamp functionality built in to eliminate the need for the audio receiver altogether. The Hookup
Weighing in at a little over 56 pounds each, these speakers definitely aren't light, but they were still manageable to carry around and set up without help. The R-28PF stands 42 inches tall, and its cabinet is a bass-reflex design with a front-firing port. Midrange and bass duties are handled by two eight-inch copper spun woofers; and, in longstanding Klipsch fashion, a one-inch aluminum tweeter is set in the company's patented Tractrix Horn. Total power is 260 watts; in each speaker, 20 watts go to the tweeter and 110 watts go to the woofers.

The R-28PF's connection panel features optical digital, USB, and RCA line-level inputs, as well as a built-in phono stage that accepts an MM phono input so that you can plug your turntable directly into the speaker. A subwoofer output is available, and Bluetooth with aptX is also built in. An included four-pin speaker cable connects the left and right speakers together to carry the audio signal from the preamp housed in the left speaker to the right speaker. Klipsch includes a simple remote with volume control/mute, play/pause, the ability to directly adjust the sub level, and dedicated buttons for each source, including Bluetooth.

Performance
I don't normally use my phone much for audio listening, as I have other media sources available. But, in this case, I decided to begin my review by taking advantage of the speakers' built-in Bluetooth. It was a breeze to set up and pair the Klipsch system with my Samsung Galaxy Note 8 phone, and I immediately queued up an old classic: "Beat It" from Michel Jackson's album Thriller (CBS). Here, I experimented with using a couple versions of the same song to see how the speaker would react. First up was the MP3 version stored on my phone. Michael's voice was smooth but seemed glossed over. I couldn't hear much of the nasally texture that I normally hear.

Personally, I'm a big fan of '80s rock. The big hair bands were one of the best things that came out of the music from that era, and one of the best parts of "Beat It" is that it features guitars from not one but two of my favorite guitar heroes. The rhythm track was performed by Steve Lukather of Toto fame, and the solo was performed by Eddie Van Halen. I haven't reviewed a speaker with horn-loaded tweeters in a while, and I thought that Eddie Van Halen's solo running through the R-28PF's tweeters would be a good test. At first, the guitar solo sounded a bit muted and thin, while Lukather's power chords were anything but. Normally sharp, bright, and a crunchy metallic, here they sounded muddied and dull. Overall, it was like there was a film overlaid on top of the music.

Switching to a FLAC version of the file improved the sound quality slightly, but at a cost. With the higher-resolution file being sent wirelessly over Bluetooth, I got more static, and the signal dropped out a bit, especially if I moved farther away from the speaker. (The Klipsch system supports aptX, but not aptX HD.) The best connection was when I placed the phone right near the speaker itself, but that's not exactly how people want to utilize Bluetooth capability.

Next, I used the included optical cable to connect the speakers directly to my VIZIO TV. Then I began binging on Season Two of Stranger Things, streaming from my phone's Netflix app to the TV and outputting sound from the TV to the Klipsch. It worked okay, but again the sound was a little flat.

I decided it was time to move away from Bluetooth entirely. Leaving my phone, I pulled up the same episode of Stranger Things on my computer and used a Wireworld Platinum Starlight 7 USB cable to send audio directly to the R-28PFs (with video sent via HDMI to my TV). The thumping bass in the theme song was taut, strong, and authoritative. For the Klipsch speakers, volume delivery was never an issue, even in my larger, wide-open living room. Dialogue opened up and was very clear. Special effect sounds, like when Eleven crawls through the sticky membrane separating the Upside Down universe from our own world, were lifelike and crisp.

Now we were getting somewhere. I went back to the Michael Jackson track, playing the FLAC file from my computer via the USB output to the Klipsch system. The difference was night and day from when I was trying to stream over Bluetooth. I could now hear the elements that weren't there before, like the finger snaps in the opening of the song. The crunchy character of Steve Lukather's guitar was back in full view; the power chords had body and slam that weren't there before. And Van Halen's solo at the end sounded beautiful through those horn tweeters. It was everything I'd expect from a pair of Klipsch reference speakers.


I wanted to test out the Klipsch's horns with some horned instruments, so I slipped the film Rocky Balboa (Blu-ray, MGM) into my OPPO BDP-105 disc player. To satisfy my own curiosity, I wanted to begin by feeding the Klipsch speakers a clean analog signal with high-quality upstream components, just to see how the speakers and their amplification performed on their own.

So, I connected the OPPO to my Parasound Halo JC2-BP preamp using balanced audio interconnects and then connected the Parasound to the R-28PF's line-level input. These speakers made the trumpets from Bill Conti's opening theme just sing. Smooth and airy, yet dynamic--it was a great performance. During the final fight scene between Creed and Conlan, the Klipsch speakers portrayed the fan cheers with a strong sense of realism, and I could feel the thumps from every punch traded by the two characters. It gave me the sense of being ringside at the historic fight.

Satisfied that I had a sense of the speakers' sound quality, I then ran the same demo content again, feeding optical digital audio output from the OPPO directly into the Klipsch system. This is a more likely configuration for most users. With the system's internal DAC and processing now factored into the equation, I still got the lion's share of quality. What I lost was a bit of the openness in the theme song and some of the immediacy during the fight scene. But the Klipsch system's ability to stand toe to toe and hold its own against top-shelf components like the OPPO and Parasound is a testament to its prowess.

Keeping this connection configuration, I queued up Marvel's Doctor Strange on the Netflix app in the OPPO. The hero music sounded as triumphant as it should. Dialogue quality was strong. In one scene where Dr. Strange speaks with the Ancient One, Benedict Cumberpatch's voice was deep and authoritative, while Tilda Swinton's was calm and even keeled. In all the fight scenes, the combatants use magical weapons that give off wisps and whiffs of air that the Klipsch system effortlessly detailed. In the final battle scene, as buildings collapse and reassemble and all sorts of mind-bending, physics-defying attacks are traded off between Strange and the evil Kaecilius, the Klipsch speakers captured every beat with clarity and dynamism that drew me into the action. The Downside
With wireless speakers, there are two prevalent technologies: Bluetooth and Wi-Fi. Klipsch opted to only use Bluetooth in the R-28PF system (and not aptX HD), which means you get some compression in the signal and limited range. As I described above, streamed audio suffered a bit in both quality and reliability, especially with higher-resolution files.

For movie/TV buffs who'd like to mate these speakers with a video player, there's no HDMI pass-through, so you can't feed the speakers the highest quality movie soundtracks in the Dolby TrueHD and DTS-HD Master Audio formats.

Comparison & Competition
I can't find a competitive powered, full-sized floorstanding speaker exactly like the R-28PF. There are many wireless, powered bookshelf speakers, as well as many single-speaker units that look like miniature soundbars meant to sit on a shelf. But the R-28PF is kind of in a category of its own, especially at its price point.

So, let's just consider some similar alternatives. The passive version of this tower speaker, the R-28F, actually sells for roughly the same price: $449 each. It allows you the flexibility to work with whatever front-end electronics you want. Moving up to Klipsch's Premiere Reference RP-280F tower speaker ($599 each) will provide a significant improvement in bass and overall refinement.

If you want to stick with powered speakers, there are (as I said above) lots of powered and wireless bookshelf speaker options. The Paradigm PW 600, at a street price around $599 each, costs slightly more and doesn't have a built-in phono stage. Being a smaller bookshelf, it also won't be able to play as loud to fill a room. However, with Anthem Room Correction built in, you can dial in the sound to better suit your room. And, thanks to the PW 600's dual-band Wi-Fi connection and DTS Play-Fi, you would be able to stream uncompressed audio directly from many apps on your phone to your speaker without having to use Bluetooth.

Klipsch's own $499/pair R-15PM powered monitor offers a similar connection package as the R-28PF in bookshelf form. Sean Killebrew reviewed this speaker for us back in 2016.

There's also any number of soundbar/sub combos that have similar connectivity (minus the phono input) and can produce good sound--but they're probably not going to provide the wider separation and more expansive soundstage you get from a pair of tower speakers.

Conclusion
Make no mistake, the Klipsch R-28PF is a great-performing speaker at its price point. The inclusion of built-in amplification, digital and analog inputs, Bluetooth connectivity, and even a built-in phono stage make this system an immense value for the right consumer. You just need to make sure that you are the right consumer--someone who wants the connection convenience of a soundbar but the performance offered by a pair of full-sized, full-range floorstanding speakers. Someone whose system is built around output options like USB and optical digital as opposed to HDMI. Perhaps someone who is also getting back into vinyl with a turntable and doesn't want to invest in a dedicated phono stage. If that describes you and you're looking for a simplified but high-quality audio solution, you should definitely check out the Klipsch R-28PF.

You'll automatically be entered in the HTR Sweepstakes, and get the hottest audio deals directly in your inbox.
Author
Myron Ho
HomeTheaterReview Product Rating
Value:
Performance:
Overall Rating:
When you buy through links on our site, we may earn an affiliate commission. Your support is greatly appreciated!
This is the static ad content. This is just a placeholder for now to get things styled.
Visit Website