Klipsch has a legacy of recordings called KlipschTape. The company has decided to make these historic recordings available to music lovers in the digital age in a variety of ways. And with extra content. 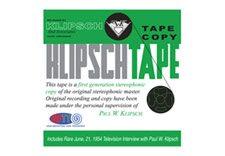 Klipsch just announced the reissue of KlipschTape, representing the best of the original Klipsch reel-to reel master tapes. After half a century, brand fans now have the opportunity to own a piece of company and overall industry history.

Originally conceived in 1956 by Paul W. Klipsch, audio pioneer and company founder, KlipschTape served as a side-line business to provide Klipsch customers with reference quality program material, as well as support compelling audio demonstrations at trade shows. Throughout its two-year existence, the KlipschTape department was able to create seven tapes that were amongst the earliest stereo recordings ever offered to the public. In addition, Klipsch was one of the first equipment manufacturers to attempt to make direct tape masters available to audio enthusiasts.

Present-day Klipsch representatives have worked with High Definition Tape Transfers (HDTT) to carefully preserve a sampling of Paul W. Klipsch's original recordings. Audio enthusiasts can now purchase a KlipschTape as a physical disc or digital download. Also included is a rare 1954 interview with Paul W. Klipsch, as well as the original liner notes that accompanied the tapes.

"I am honored to have played a part in the rediscovery of Paul W. Klipsch's early stereo recordings," said Jim Hunter, curator of the Klipsch Museum of Audio History. "After uncovering the tape collection in storage nearly two years ago, its condition left me hesitant when it came to the thought of re-releasing the 1950's recordings. When provided with the result of HDTT's efforts, it became apparent that brand fans were going to have another chance to experience history, and there's really no better feeling."

The reissued KlipschTape is available for purchase at http://highdeftapetransfers.com and file types range from $7.99 (U.S. MSRP) to $36.50 (U.S. MSRP).