Certain names are as much a turn-off for some people as they are a turn-on for others. Krankz is a prime example. The name, obviously taken from the phrase "Crank it up!", implies that a device was created to play... 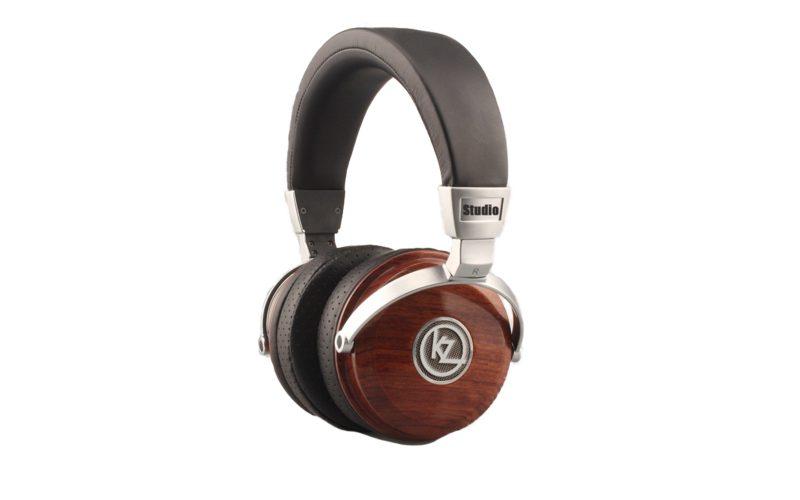 Certain names are as much a turn-off for some people as they are a turn-on for others. Krankz is a prime example. The name, obviously taken from the phrase "Crank it up!", implies that a device was created to play loudly--and, as Jerry Garcia once said, "Louder is always better, at least in this world." Whatever your reaction to the company name, Krankz makes a mighty nice, very reasonably priced ($279.99 MSRP) set of semi-open over-the-ear headphones called the Studio, which is the subject of today's review.

Product Description
The Studio headphones feature satin-finished, genuine-wood Sapele enclosures with a quarter-sized opening at their center that allows the 50mm dynamic driver to move freely without any air-pressure enclosure resistance. The metal yokes allow the Studio headphones to pivot on both horizontal and vertical planes and fold flat. With an adjustable padded headband, soft comfortable earpads, and a driver pair that is matched to within 0.5 dB, the Studio makes a strong argument that it's just not another pair of flashy headphones for teens; rather, these are designed for professional use.

Other examples of Krankz's attention to detail include the Studio's use of special "de-stressed" vented diaphragm drivers with an eight-conductor connecting cable, a voice coil wire that uses ultra-pure long-crystal copper, a high-purity copper 12-conductor wire for the headphone cable, and a light but protective travel case.

Ergonomic Impressions
Although they weigh 0.8 pounds, which is heavier than many competing headphones, the Studio headphones proved to be quite comfortable, especially considering that the earcups are barely over-the-ear size. My ears fit, just barely, within the confines of the earpads; if you have oversized lobes, this could be a problem. For those individuals who have a somewhat larger-than-standard head size, you will find that the Studio headphones do not exhibit increasing side-pressure as the headband expands.

Like a traditional studio-type headphone, the Studio has a single headphone cable connection on the left enclosure. The left and right earcups are clearly marked on their yokes.

Sonic Impressions
The sound emanating from the Krankz Studio headphones was far more musical than I expected. Unlike many headphones in this price range that go for the happy-face curve where the bass and treble frequencies are elevated, the Studio headphones are all about producing a rich, fully fleshed-out and downright seductive midrange. Sure, there's bass, but it's not in-your-face bass. Instead the bass fundamentals are somewhat softer and not as detailed as with some headphones, such as the 1More triple-driver on-ear headphones. The Studio's high frequencies are not as airy or extended as I would prefer, but they are also not peaky and do not spotlight the lower treble.

When compared with a high-end reference headphone like the HiFIMan HE-1000 V2, the Studio's midrange sonority came remarkably close. Sure, it lacked the same openness, image size, bass extension, and treble air; but, unlike many headphones, at least the Studio got the midrange right.

Due in equal parts to its comfort level and midrange presentation, I found I could use the Studio headphones for extended listening sessions with no fatigue. During those long listening sessions, I came to really value what the Studio does well. Although these headphones do not produce as large a soundstage or with the same level of image specificity as my reference phones, their soundstage was in proper proportion, with some air and space between instruments (it just wasn't as well defined as the current state-of-the-art models).

Overall build quality was excellent. The only exception to its impeccable finish (especially on the wood) was the KZ symbol, whose edges were too darned sharp.

High Points
• The Krankz Studio headphones are ruggedly built.
• The fit is very comfortable.
• The detachable cord employs a universal standard connection.
• These headphones have a seductive midrange.

Low Points
• The upper midrange and treble are slightly recessed.
• The low bass is slightly soft.
• The edges of the KZ logo on the vents are too sharp.

Comparison & Competition
There are so many options in the $275 to $300 price range that, to keep all our heads from exploding, I'm going to compare the Krankz Studio headphones to one similarly priced model: the 1More Triple Driver on-ear headphone. The official "High-Res Certified" Triple Driver has three drivers, but it is not a three-way design. It has two active drivers: a 40mm composite metal diaphragm that uses graphene and a ceramic tweeter. The third "driver" is actually a passive unit that resonates in sympathy and relies on the two active drivers for energy. The 1More headphones have a more extended top end and more prominent and extended bass, but their midrange lacks the Studio's warmth and body. Female singers sounded breathier and less chesty through the 1More Triple driver. Comfort-wise, it was a toss-up between the two, but the Studio headphones were noticeably less fatiguing sonically, due to their more relaxed, less "technicolor" harmonic presentation.

Conclusion
If you favor "spectacular" sound, I would suggest you look elsewhere for your favorite under-$300 full-sized studio headphone. However, if you want a headphone that is made to last, gets the midrange right, and has a low fatigue factor, you should give the Studio headphones serious consideration ... despite the company's groovy name.