It just doesn't get better than Krell's Evolution monoblock power amps but it also doesn't get much more expensive either. Krell is now out with a 400 watt solution that is slightly more in the reach of the well-heeled audiophile. 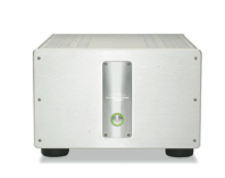 Based on the original Evolution series, the Evolution 400e includes a number of refinements to the original platform. A 4,000 VA transformer is still the backbone of the Evolution 400e power supply. An additional 44,800 microfarads of capacitance has been added, a total of 150,400 microfarads, making the Evolution 400e more dynamic than its predecessor. An additional transformer for the control and protection circuitry also provides power for a new energy efficient standby mode. Similar to turning off a 150W light that is always on in your house; standby power draw has been cut from 150W to 2W. This 99% reduction in electrical usage also substantially reduces heat output. The high-current and high-voltage analog supplies have additional noise filtration circuitry to reduce high-frequency switching noise. For better isolation between the incoming AC power and the DC power supplies, the power supply circuitry has also been redesigned and upgraded. The amplifier accommodates different impedances delivering 400 watts into 8 Ohms, 800 watts into 4 Ohms, and 1,600 watts into 2 Ohms.

Current Evolution 400 amplifiers are upgradeable to the Evolution 400e performance at the Krell facility. The retail price for the upgrade is US $5,000 per unit plus shipping.