Krell are makers of high quality amplifiers with large price tags. Or are they? When Andrew Robinson tested out the Krell Evolution 2250e stereo amp, he found the expected quality but not the expected price tag. 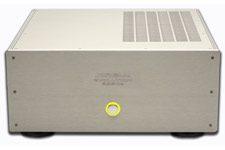 In years past, Krell hasn’t exactly been on the forefront of affordable technology but they have been a leader when it comes to performance and their new 2250e two-channel amplifier furthers the tradition while also managing to be relatively affordable to boot. I say relatively because the 2250e retails for $8,000, which is still a lot of money; however for Krell it’s a bargain.

The 2250e looks similar to Krell’s 3250e three-channel amplifier that I reviewed earlier this year – in fact they share the same chassis and construction though the 2250e boasts two-channels of amplification to the 3250e’s three. The 2250e measures 17 and a quarter inches wide by seven and a half inches tall by just over 19 inches deep. While nowhere near as heavy as the Krell 402e, the 2250e’s 77 pounds is still substantial. Speaking of the 402e, the 2250e takes a page from its larger sibling, offering some of what makes the 402e so magical while doing away with a few of its costlier features – features such as Krell CAST. For more on the 2250e’s construction and features please check out my review of the 3250e. The 2250e dishes out 250 Watts per channel into eight Ohms and 500 Watts per channel into four. However, just because the 2250e possesses some incredible power doesn’t mean it’s a complete monster for it consumes less than two Watts in standby. As far as connections options, the 2250e has both balanced and unbalanced input options as well as a pair of robust five-way binding posts. A 15-amp detachable power cord rounds out the 2250e’s list of features.

In terms of sound quality the 2250e sounds identical to its three-channel counterpart, the 3250e. The 2250e’s overall sonic signature is one of refinement and neutrality though some may mistake it for being lean and/or forward, which it is not. In reality a lot of other amps are simply more lush. The 2250e’s bass is taut with excellent control, extension and detail, not to mention depth while its high frequency performance is smooth and grain free. The midrange is also smooth, with tremendous dimension and weight giving vocals, especially female vocals such as Sarah McLachlan’s, a palpable presence. Soundstage-wise the 2250e possesses a vast and open soundstage that it manages to be enveloping whilst still remaining focused. Dynamics, another Krell staple, are solid with the 2250e and its power seems limitless regardless of how loud you wish to play your favorite music or how inefficient your favorite speakers.

Read about the high points and low points of the Krell 2250e amp on Page 2. High Points
• Despite its somewhat plain Jane looks, the 2250e still manages to be
rather attractive and its build quality is on par with that of a Sherman
tank – as it should be given that the 2250e is made in the USA.
• The layout of the 2250e’s rear panel makes connections a breeze and
cable management a snap no matter how thin or robust your chosen
interconnects and/or speaker cables.
• The 2250e’s sound is eerily similar to that of the 402e, with the 402e
possessing that last ounce of refinement over the 2250e. Honestly, one
wouldn’t be outside the realm of reason to think of the 2250e not as its
own amplifier but as a baby 402e for less than half the price, making
it the better value.
• While designed primarily for two-channel use, the 2250e excels at
playing back cinematic content as well, whether that content is the
latest Hollywood blockbuster or something more subdued. Pair the 2250e
with its three-channel sibling, the 3250e, and you’ve got a home theater
marriage made in heaven.

Low Points
• The 2250e’s binding posts are shrouded in a thick clear plastic which
makes them acceptable abroad, however tricky to use here since the only
way to connect spade terminated speaker cables is from below.
• While the 2250e may only sip two Watts in standby, it’s not as frugal
when in use, requiring up to 2,400 Watts of total power at full tilt.
• Because the 2250e uses a 20 amp power cord receptacle special
consideration must be given when shopping for an aftermarket power cable
to ensure a proper fit. I bring this up because the 2250e does seem to
benefit from even a mild power cord upgrade.
• The 2250e runs warm and should be installed in such a way as to
provide adequate ventilation both top and bottom and side to side.

Competition and Comparison
$8,000 buys you a lot of amplifier these days and in some instances it
buys you more than one; however in the five to ten grand category some
comparable products are: Classé’s new Delta Series CA-2300 amplifier and Mark Levinson’s No 532H amplifier. If you’re going
strictly off power figures then there is Parasound’s Halo A21 amplifier and Musical Fidelity’s M6 PRX
amplifier. Both cost less than the before-mentioned amps but do give up a bit
of refinement to the costlier amps as well.

Conclusion
The 2250e at $8,000 retail is yet another truly fine amplifier from
Krell and while some readers may jump down my throat for singing its
praises when there are obviously less expensive solutions out there – it
doesn’t mean the 2250e isn’t worth it. How I justify the 2250e is
simple, I don’t view it as cost effective Krell amplifier – instead I
view it as a less expensive Krell 402e, which is precisely what it is.
Even at $18,500 the Krell 402e is still my favorite amplifier; however
at less than half the price I find the 2250e to be that much more
impressive in terms of overall value.