If there wasn't a Krell 900 Watt monoblock power amp - the Krell Evolution 600 amps would be the biggest, badest things on the planet. With enough Dan D'agostino designed spank to light up any Focal, Wilson or Magico speaker - these amps are what audiophile dreams are made of. Read the full review here. 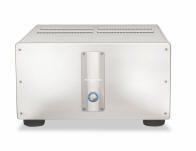 Although it took a decade too long, at last there's a major backlash against the three-watt brigade. Those benighted fools, who think that a single-figure-wattage 300B into some absurd high-sensitivity horn is a substitute for real-world power, have been purveying compressed, compromised sound for too long. With the likes of Musical Fidelity's crusade via the "Supercharger," the success of Ayre's 300W MX-R monoblock, et al, a growing number of audiophiles are rediscovering what they've been missing: dynamics, speed, slam.

Power is something in which Krell always believed. Although one of its greatest achievements was a 50-watt stereo amp, Krell's street cred is based on unbridled power. If it wasn't simply a case of sheer wattage - the company still offers an integrated with "only" 200 watts per channel - then it was a notion that Krells could drive any load without complaint. With the Evolution series, and the latest incarnation of CAST technology, the bar has been raised substantially, but then, so has the price.

At a time when the green movement wants everyone to feel guilty about everything, it's hard to talk about hi-fi equipment that utilizes so much of the Earth's resources in manufacture and then sucks up a lot of juice when in use. But this is not New Scientist and I'm not Jonathon Porritt, so let's just accept that such stuff exists and that it's far less contributory to the world's ills than, say, the filth spewing out of factories in China.

Utterly inexcusable, though, is manufacturing a power amp weighing a ludicrous 61.1kg in materials, with high shipping costs and user-unfriendliness. Whatever sonic excuses Krell may choose to come up with, I'm not about to be convinced when I also have before me a genuine 600-watt monoblock, weighing 10kg, from a rival. The Krell's 5000 VA power supply, massive construction, whatever: the words "balls" and "swinging" spring to mind. What morons judge hi-fi on size and weight? End of rant.

But once you've manhandled the Krell Evolution 600 into place (would it have killed them to fit handles?), a magical journey commences. Even ice-cold, the Krells were doing something so right and so impressive that I was almost able to overlook the fact that a pair costs the same as a BMW 320i M Sport.

In order to experience the full-on Evolution event, I also used the Evolution 202 preamplifier, connected in balanced mode with CAST II in play. I also used other preamps, but the serious listening involved the 202 and CAST II because, in my experience, it's the best way to extract all that this amp can deliver.

Krell employs what they call Active Cascode Topology to eliminate global negative feedback, using only nested local feedback around individual gain blocks. This is said to produce "an extraordinarily open, liquid, effortless sound." No arguments here: for an overkill solid-state amp, the sound is deliriously lush.

Equally, Krell opts for - as it always has - arch detail, control and precision, much of which can be credited to Krell Current Mode and CAST II circuitry in the signal path. Briefly, in Krell's words, CAST uses "proprietary multiple-output current mirrors in a complementary and balanced arrangement for extraordinary open loop linearity." I don't know what that means either, but I can tell you this: having tried the '600 with and without, the effect of employing CAST is like tightening up the screws in a head-shell, or ensuring that a wrecking ball couldn't dislodge your speakers. It improves control and focus, and the effect is not subtle.

Sheer complexity contributes, no doubt, to the aforementioned weight. The massive power supply section features "extensive electrical and magnetic shielding to keep radiated interference out of critical amplifier circuits." The Krell proved relatively indifferent to the four types of AC rings in my room, thanks to its internal line-conditioning circuitry, which filters RF noise from the mains. Krell also points out that this compensates for asymmetric power waveforms and DC on the mains, so there are probably few gains to be made by adding an outboard line purifier. Or even a regenerator. Moreover, the rails powering the amplifiers' low level and gain stages are regulated twice, as Krell puts it, "for total immunity from fluctuations in the AC mains and virtually noise-free output."

Everything is monitored with the thoroughness of the latest Lexus, with microprocessor control to continuously monitor all critical operational parameters. These include bias, load impedance, regulator output voltages and operating temperature. The amps didn't misbehave once. The only disarming thing about the Evolution 600 was that the lights dimmed momentarily when I switched on the primary mains toggle at the back.

For primary listening, I fed the 202 with the Musical Fidelity kW two-box CD player and SME 30/SME Series V/Blue Angel front-end via the Audio Research PH5 phono stage. Speakers were Sonus faber Guarneri and Apogee Scintilla, wired with Yter cables. It was like a throwback to one of hi-fi's golden ages, 1983-90.

In that unashamedly non-green era, the wattage race was like the arms race of the 1950s. Every month, a humongous new amplifier would emerge. (At least, from the USA. Prior to the arrivals of Musical Fidelity, Chord, et al, the British were content to putt-putt along with wimp amps.) I distinctly remember being wowed by the sheer presence that music had back then, rather than the politically correct, washed-out, downsized nonsense that passes for it today.

Put it down to the iPod, fear of upsetting neighbors or whatever. The only sound systems with guts today are, unfortunately, the in-car systems owned by morons with backward baseball caps, listening to that most hateful of music, hip-hop. Amps like the 600 allow you to reclaim the high ground. Amps like this bring back (deep breath) the reality of music.

Read MUCH MUCH more on Page 2

If we are to be honest about what hi-fi should do, then we must place realism at the fore. Whether the speakers needed all that the '600s could muster (Guarneris, Scintillas) or if I was just having fun (LS3/5As, Quad ESLs), the sensation afforded by seemingly limitless power is liberating beyond belief. I can, in fact, liken it to only one other experience, that of driving a car with a surfeit of horsepower. When you floor the pedal of a Bentley Azure, and that behemoth glides effortlessly past a Porsche Boxster, well, life takes on a hue with no shades of Brown. Or Blair.

So, too, is the experience with the 600. And it wasn't solely with music known for its bombast. Yes, I used some scary percussion discs, marveling as much at the Guarneris' refusal to break as at the phenomenal extension and sheer freedom of the sound. But the tear-in-eye/lump-in-throat moments arrived repeatedly with the soft stuff, with the very material you would assume required little in the way of wattage.

Incapable as I am of equating the power of, say, a real trumpet with the audio wattage needed to reproduce it into a given speaker, I am equally unable to grasp what is the "wattage" of a human voice. But even
with a wispy thing of a vocal from Art Garfunkel, or Joni Mitchell in one of her more delicate moods, the absolute freedom from concerns about headroom was still manifest. Voices were open, natural, unconstrained. They enjoyed a real space. They were free of artifice.

This is walking straight into Musical Fidelity's web, but there's no escaping it. The massed vocals of Mr. Big's "To Be With You" swelled into the room to near-Gregorian majesty, while the Byrds' jingle-jangled all morning, the tingle of the signature 12-string Rickenbacker enjoying clarity, presence and body that would be denied it by a struggling power source.

Every time I've reviewed a product, without fail, there's been one telling moment, one showpiece track that revealed more about the item than any other. It is indicative of the talent that was Dusty Springfield that "Son of a Preacher Man" just may be the sexiest song ever recorded. Yes, even more salacious than Peggy Lee's "Fever." That Springfield was also one of Sappho's sisters adds to the mythos: I am deeply amused that a song by a deceased lesbian has the same effect on me as Viagra.

I've heard that song a few hundred times. But through the Evolution '600, I detected details I missed in the past. More crucial, though, was the reproduction of one of the most effective musical effects in the history of recorded sound: Dusty Springfield's breathiness. This provided me with the one word I wish to use to define the Krell Evolution 600. With the "g" in place, without allusion to its current usage, with sole reference to its effect on one's heart, soul and nervous system: "chilling."

How so? Because it delivers that tingle factor more repeatedly than any amp I can recall in recent memory, right up there with the kilowatt Musical Fidelity kW monoliths and the 600-watt Audio Research Reference monoblocks. Constantly dazzled was I by its way, not with bombast, for which its only rivals are probably the bigger Evolution models, but the sheer absence of artifice and the heightened detail. Addicted as I am to the works of Judee Sill, it was an honor, a privilege, to hear even further into the layers of sound on her deceptively simple recordings.

Krell's Evolution 600 begs the need for anything more: regardless of speaker, this amplifier never delivers less than easy, unstressed sound with HUGE dynamics and slam. The pleasant surprise was the sheer finesse when used with a CAST II-equipped preamp. The only downside is a slight tendency toward the clinical. That aside, it reminded me of the greatest Krells of yore.

This is the first product in years that made me want to have a cigarette after the act.