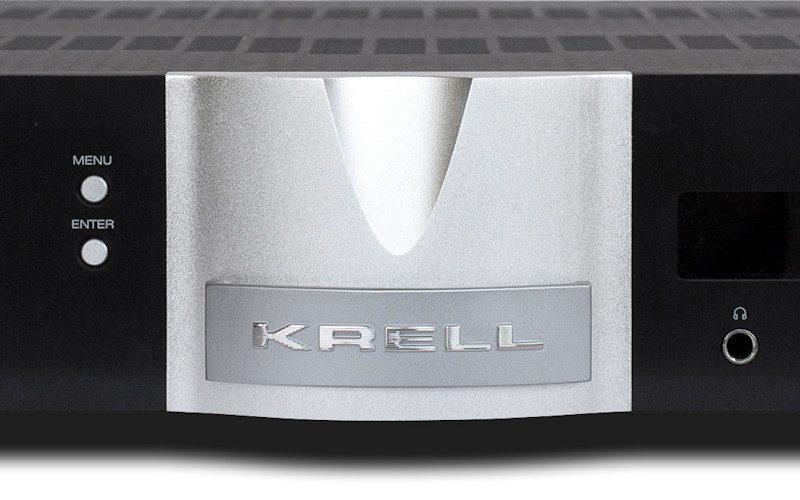 It seems like, every few years, Krell goes through a major cosmetic (and sometimes engineering) revamp. Visually, the song always seems to be the same: variations on the unashamedly macho look that began with the KSA-100 amplifier way back in 1981. The new Illusion II digital preamp embodies the same industrial design ideas as the new iBias amplifiers: a more understated (or less overstated) look, with a form factor conducive to rack-mounting. It’s still macho, though.

Engineering-wise, there’s nothing particularly “revamped” about the Illusion II ($7,000). It’s a straightforward high-end digital preamp--i.e., an analog preamp with a built-in digital-to-analog converter, a concept that’s rapidly becoming the norm in two-channel audio. The Illusion II has five digital inputs feeding its 24-bit/192-kilohertz ESS Sabre DAC: one AES/EBU, two coaxial RCA, and two Toslink optical. If it seems like something’s missing, it is: there’s no USB input. USB audio inputs have become ubiquitous only over the last couple of years; and, according to company president Bill McKiegan, the Illusion II was too far along in its development cycle to add USB. This isn’t a big deal; you just need to add a USB-to-coax converter, which I’ll discuss in the Hookup section below.

The Illusion II also has four stereo analog inputs: three RCA and one XLR. There’s no built-in phono preamp; so, if you want to use a turntable, you’ll have to provide the phono pre. XLR and RCA stereo outputs are provided, as is a quarter-inch front headphone jack.

For the Illusion II, Krell uses much the same control system as in its other recent preamps and integrated amps (including the S-300i integrated I usually use for speaker reviews). You can do all the normal stuff, like volume and input selection, from the front panel or remote. A front-panel alphanumeric display with a menu system lets you access more exotic features, such as balance, home theater bypass, input trim and naming, and the function of the 12-volt DC trigger jack on the back (which can send out a trigger voltage to turn on your amps when you turn on the preamp).

Krell’s website touts four main features of the analog circuitry: current mode design; a fully balanced circuit topology, in which separate circuits amplify the positive and negative halves of the audio signal; dual-mono layout, with separate circuit boards for left and right channels; and a power supply with 40,000 microfarads of storage capacitance, which is a lot for a preamp. Of course, all of this reflects well on the construction quality, but none of it really tells you how the Illusion II is going to sound.

The Hookup
Let’s get past that big issue I cited above: the Illusion II’s lack of a USB input. It seems to me that almost everyone who buys this stereo preamp would want to use a computer as a source device, so finding a way to connect a computer to the Illusion II is priority number one in any installation. What you need here is a USB-to-coax converter: a “dumb box” that simply converts the USB from your computer to an SPDIF coaxial RCA digital output that the Illusion II can accept. I ended up using a Peachtree Audio T1 converter--which costs $79, worked instantly with my Toshiba laptop running Windows 7, and required no driver installation. The T1 only passes resolutions up to 24/96, though; if you want 24/192, spend $149 for the Peachtree X1. Of course, other manufacturers offer higher-end options you can explore. (Unfortunately, I started with the NuForce U192S converter, which I picked up for $49, but I couldn’t get it to work with my PC or a friend’s Mac, even after installing the drivers downloaded from the company’s site. NuForce’s only product support was a phone number with an answering machine that promised a company rep would call back, but no one ever did. So I recommend that you get one of the Peachtree models instead.)

I used the Illusion II with a couple different amps: the Krell Solo 375 mono blocks and a Classé Audio CA-2300 stereo amp. Speakers were either the Revel Performa3 F206 midsized towers or the Krell Resolution 1 large towers. Interconnects were all Canare Star Quad, and speaker cables were AudioQuest CinemaQuest 14/2. Most of my listening was using my Toshiba computer as the source, but I also used my Music Hall Ikura turntable and NAD PP-3 phono preamp to get an idea of how the Illusion II’s analog section sounds. I also used it in home theater bypass mode along with my Denon AVR-2809CI receiver (used as a surround processor only), with the Krell amps handling left and right channels and an AudioControl Savoy seven-channel amp handling the center and surrounds.

All comparisons cited in the review were conducted with levels matched to within 0.1 decibel.

Performance
I listened to the Illusion II on a casual basis for about a month before I sat down for a serious evaluation, and in that month I didn’t notice any particular sonic character or idiosyncrasy. In fact, my attention was never drawn to the preamp. It always worked fine and sounded great.

When I sat down to do an in-depth evaluation, I started by using the analog inputs with my turntable so that I could get an idea of the sound quality of the core analog circuitry. As best as I can describe it, the sound quality was, well, mostly nothing. I couldn’t pin down any particular coloration or tonality, even though I easily heard differences among different amplifiers, audio codecs, and other audio products I tested while the Illusion II was in my system.

One thing I loved about the Illusion II’s sound was that I never found it harsh, edgy, or bright. For example, on “Matte Kudasai” from the LP Levin Brothers, by bassist Tony Levin and keyboardist/arranger Pete Levin, the brushed cymbals can sound a bit edgy and steely through some audio components (as cymbals often do), but through the Illusion II’s analog stage, the cymbals sounded smoother and brassier.

When I played guitarist Larry Carlton’s Sleepwalk LP, particularly the cut “Last Nite,” I dug the solid groove that Carlton and his fellow Los Angeles and New York studio aces laid down. Why did I dig it, maybe a little more than I normally would? Because the sound seemed nicely focused, with a particularly solid center image. The bass sounded appropriately full-bodied, the keyboards suitably spacious, and Carlton’s guitar had lots of body and soul…just as it should.

After several more albums, I felt I had a pretty good handle on the sound of the Illusion II’s analog circuitry; so, to check out the DAC, I switched over to one of the coaxial digital inputs, fed by my Toshiba laptop through the Peachtree Audio T1 USB-to-coax converter. I know L.A. saxophonist Terry Landry’s Amazonas (http://terrylandry.virb.com/listen ) well because I was there for the recording session, conducted with audiophile engineer/producer Joe Harley using Sony Direct Stream Digital recording equipment, and the mastering session, performed by mastering legend Bernie Grundman at his L.A. studio. Again, the groove was solid, and the cymbals sounded smooth. So did Landry’s tenor sax, which I thought sounded just a little smoother than usual. It was a nice sound, but Landry’s tone has a trace more edge and breath in it than I heard here.

Even the (arguably) toughest test track I have, the live stereo version of James Taylor’s “Shower the People” from Live at the Beacon Theatre, sounded smooth, natural, and colorless (but in a good way) through the Illusion II. Vocalist Arnold McCuller’s solo at the end--a bravura performance that taxes the midrange reproduction of audio components--never broke up or got edgy or bright.

James Taylor - Shower The People (Live at the Beacon Theater)

Look, I am not the guy who gets super-excited about headphone amps; to me, I just want one that’s conservatively engineered and has a low output impedance (which, in general, assures the flattest possible frequency response from the headphones). But the first thing I scrawled in my notebook was, “The Krell is OBVIOUSLY better.” The Illusion II’s headphone amp had an obviously greater sense of space, tighter bass, more detail, more space, and a smoother sound overall; in comparison, the V-Can sounded rather grainy and low-res. Often, headphone amps are added to preamps as an afterthought, without much engineering effort, but it seems Krell put some serious effort into the Illusion II’s headphone amp.

An obvious competitor for the Illusion II is the Classé Audio CP-800, which costs a little less ($6,000) and does a little more (it includes a subwoofer output, USB input, and DSP capability with parametric equalization). I did extensive A/B comparisons between the two preamps, and the main difference was in the mid-treble, of which the CP-800 had more.

Sometimes the CP-800’s more prominent mid-treble gave it a more spacious, airy sound. Sometimes it gave a thinner sound. For example, in Steely Dan’s classic “Aja,” Donald Fagen’s voice sounded smooth through the Illusion II but a little dry through the CP-800, as if Fagen could have used a drink of water. The CP-800 had more apparent detail, yet it also made the cymbals on “Aja” sound a little more like aluminum and less like brass. The CP-800’s center image also seemed rather spread out compared with the Illusion II’s more focused center. Which is better? I think that’s a matter of opinion.

All of these differences were subtle, though. On many tunes, such as R.E.M.’s “Cuyahoga” (from the Life’s Rich Pageant LP), David Chesky’s “Bronxville” (from the Body Acoustic CD), and most of the tunes on the Levin Brothers album, the two preamps sounded almost identical. Should this be a surprise? They’re comparably priced solid-state preamps from companies that have been around for decades and have similar engineering approaches.

The Downside
If you like tons of treble detail--perhaps even slightly exaggerated treble detail--I don’t think the Illusion II is your digital preamp. I loved its sound, but I’m 53, and I’ve noticed that the older listeners get, the more they like smoother treble. I could speculate as to why, but I’d just be speculating.

As I suggested above in my description of the Classé Audio CP-800, it is possible to get more features in a digital preamp of comparable quality in the Illusion II’s price range. And there is that lack of a USB input--even though the fix is simple, some audiophiles might be taken aback at having to spend another $75 to $150 to bring what I (and I’m sure many other audiophiles) consider a fundamental, must-have feature.

Conclusion
The Illusion II is a fairly basic digital stereo preamp with a solid asking price. Absolutely, it sounds great. Some audiophiles will likely consider its tonal balance ever so slightly warm but deliciously wonderful, while others may want a little more top end. As for me, I was always very, very happy with the sound of my system when the Illusion II was in it.

You'll automatically be entered in the HTR Sweepstakes, and get the hottest audio deals directly in your inbox.
Subscribe
Connect withD
Login
Connect withD
7 Comments
Oldest
Newest Most Voted
Inline Feedbacks
View all comments
Author
Brent Butterworth
HomeTheaterReview Product Rating
Value:
Performance:
Overall Rating:
When you buy through links on our site, we may earn an affiliate commission. Your support is greatly appreciated!
This is the static ad content. This is just a placeholder for now to get things styled.
Visit Website