The best way to get into the ultra-high-end world of Krell gear is to start with one of their beefy integrated amps. The Krell KAV-400XI is just what the doctor ordered for many of not close to all audiophile applications not needing huge monoblock amps. Read the full Brian Kahn review here. 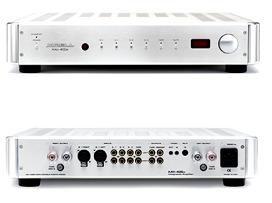 Krell is well known for making what many consider to be among the finest amplifiers in the world.  Krell has, for several years, been making two lines of products, the comparatively large and expensive standard line and the relatively new KAV series, which is lower-priced. The KAV line contains the first units that embodies Krell's new aesthetically pleasing design, which moves away from the heavy slab designs of the past. The KAV-400xi is the latest integrated amplifier in the KAV line, replacing the KAV-300iL.


At $2,500, the KAV-400xi is not an inexpensive piece, yet it offers great audiophile value. Your money buys you 200 watts per channel of real Krell amplification. This means a low negative feedback design, fully balanced signal path and pure class-A circuitry up to the driver stage. In addition to this, you also get a full-featured line-level preamplifier.  The preamplifier will even let you configure one of the inputs to a Theater Throughput mode, which bypasses the internal volume and balance control, so that the KAV-400xi can be used to drive the front pair of speakers in a home theater system.

The entire chassis is machined out of thick aluminum panels and built like a tank. The panels feature a brushed anodized finish, with the corners made out of separate pieces of highly polished and rounded metal. The front panel features, from left to right, a power button with an indicator light that glows the familiar Krell blue when on and red when in standby, four source selector buttons, tape, mute, an LED display for volume and balance and, finally, a knob for volume control.

The 400xi, like its predecessor, comes with a thin, credit card-sized remote. The buttons are slightly raised and made out of some sort of plastic membrane material. I personally don't mind the remote's design, as it fits with the 400xi's contemporary aesthetic, but I have heard complaints about it. Admittedly, this design does not work well in darkened rooms, as it is not backlit and the buttons are hard to distinguish by feel alone.

The performance capabilities of the KAV-400xi are extremely good. Despite its small form factor, roughly 17 inches square and less than four inches high, it packs a wallop. The amplifier never ran out of steam or lost control. Sound quality was neutral and refined, without the glare and grain that plague so many solid state designs. This is an integrated amplifier that offers true audiophile performance.

High Points
• The build quality is excellent and the units are solid and well-finished. It's not the Krell FBI integrated amp or the Evolution series, but the 400XI is also not $16,000 (or much more). For its price, the Krell 400xi integrated amp is beautifully built.
• The KAV-400xi provides powerful and clean amplification that rivals or betters many separate systems costing more.
• The unit's flexible design allows it to work with either single-ended or balanced sources and it can also integrate with a surround sound system.

Low Points
• There are no balanced outputs to feed either a balanced recording device or external amplifier in the event you want to expand your system in the future.
• The remote's design, coupled with the lack of backlighting, makes it hard to use in the dark.

Conclusion
The KAV-400xi provides power and audiophile performance at a reasonable price. This integrated amplifier is modest in size, but provides power and refinement at serious audiophile levels. I experimented using the 400xi as a preamplifier and it provided very strong performance, but I don't see many people doing this, as the amplification portion of the unit is just as good, if not better. This integrated amplifier does not compromise either the pre-amplifier or the amplifier portions; both are very good. In order to purchase this level of performance as two separate products, it would no doubt cost much more than the KAV-400xi's asking price. This is one of those situations where you get more than what you pay for.