Looking for a great home theater amp that also delivers pure Class A performance up to 100 watts per channel? Myron Ho says the Krell Theater 7 sets a new standard at this price point. 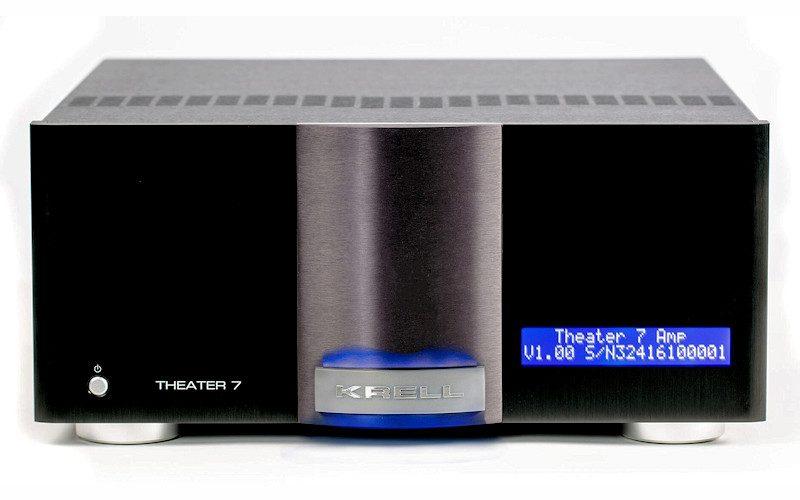 Krell has had its share of ups and downs in the past few years, and not just of the managerial sort that recently resulted in recent new management and a solid attempt at reinvigorating the brand. Nearly a decade ago, the company made quite the statement amongst its better-heeled, die-hard with its $30,000 Evolution 707 AV preamp and similarly priced associated amplification. It also more recently launched the Foundation line, which represented a new strategy of bringing Krell’s inimitable build quality and performance to a larger pool of consumers at more attainable price points.

At its heart, though, Krell has always been a company whose reputation lay not just with its build quality, but also its technology. Technology like Class A iBias topology, for example, which first debuted in Krell’s new flagship and Chorus line of amplifiers as a novel way to provide coveted Class A sound quality while dealing with the topology’s known issues: excessive power consumption and heat dissipation. The new Krell Theater 7 seven-channel amplifier benefits from a trickling down of that technology to a lower price point. At $7,500 retail, the Theater 7 is Krell’s entry level seven channel amplifier. Total output is rated at 120 Watts per channel RMS into 8Ω with two channels driven and 105 Watts per channel RMS into 8Ω with all seven channels driven. With 4Ω loads, those numbers go up to 210 and 140 Watts, respectively.

Setup
As you might expect, given that the Theater 7 is a multichannel amp, setup isn’t overly complicated. Analog inputs consist of seven XLR balanced or single-ended RCA connectors, and the outputs comprise seven sets of densely packed binding posts. The amp is reasonably beefy at 70 pounds, so you’ll need to be careful not to stack it on top of other gear. And stacking other gear on top of it is an equally bad idea, as it needs some room to breathe. 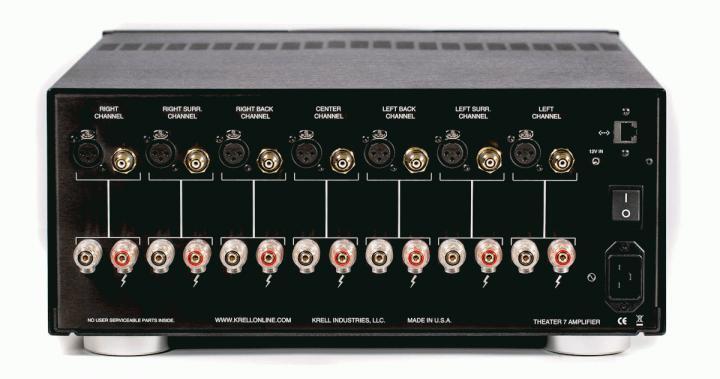 Perhaps the most surprising thing about the Theater 7 is its Ethernet connection, which can be used to monitor the amp’s performance and protection circuits, tweak presets like display brightness and timeout, mute individual channels, and update the firmware. You can also set up email alerts to automatically alert you or your dealer to issues pertaining to excessive current, overheating, short-circuiting, etc.

Performance
Krell is known for big, powerful, bass-forward amps, so my first question when sitting down to evaluate the Theater 7 was whether or not it could live up to that reputation at this lower price point. As such, I gave the Theater 7 a torture test right off the bat by playing some movies without a subwoofer and setting my Salk Signature Soundscape 12 speakers to full range.

This effectively meant the 12-inch woofers on my Salks would serve as the de facto dual subs for the system, and the Krell Theater 7 would be driving that along with all the other channels simultaneously.

I pushed volume up to THX reference levels on exceptionally bass heavy soundtracks like The Dark Knight and Tron: Legacy. The bass sounded tight and well controlled with both explosions and percussion-heavy music, physically rumbling my innards. Simultaneously, dialog and music were crystal clear. At no point did I hear the Krell stress or strain, a true indicator of its top-shelf build quality and design integrity.

On multichannel music, the Krell offered a rich and refined sound, very much like a traditional Class A amplifier. Unlike many traditional Class A amplifiers, which can double as a grill for your steaks, the Krell was merely warm to the touch. As you would expect from Krell, there was no audible distortion, even with high-resolution music. The Krell Theater 7 was quite neutral sounding, but maintained a musicality that I found soothing.

Competition and Comparison
The ATI Signature 6007 amplifier costs $500 more at retail and will provide you more power still with all channels driven, should you need it. The ATI is a very nicely designed Class AB amp, so you’ll be giving up on the warmth and purity of tone you’d get from the likes of this Krell or (at lower listening levels) Pass Labs, etc. The ATI also weighs 136 pounds, so unless you happen to be the reigning World’s Strongest Man, you may find it difficult to install by yourself.

In Krell’s own lineup, the Chorus 7200 costs $3,000 more, but offers an extra 100 watts per channel. The Monoprice Monolith 7 is a great value, being priced at a significantly lower $1,600 price point, but you will most likely find it doesn’t quite rival the refinement and headroom of the Krell. It’s great for the money, it’s just not Krell great.

You'll automatically be entered in the HTR Sweepstakes, and get the hottest audio deals directly in your inbox.
0 0 votes
Article Rating
Subscribe
Connect withD
Login
Connect withD
0 Comments
Inline Feedbacks
View all comments
Author
Myron Ho
HomeTheaterReview Product Rating
Value:
Performance:
Overall Rating:
When you buy through links on our site, we may earn an affiliate commission. Your support is greatly appreciated!
This is the static ad content. This is just a placeholder for now to get things styled.
Visit Website