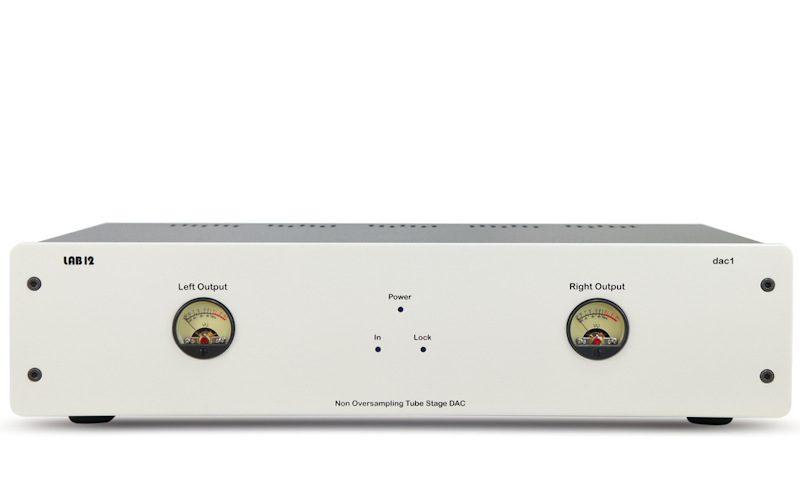 Terry London says the Lab 12 DAC1 SE crushes the price-versus-performance ratio in a totally absurd fashion, with beautiful timbres and tonality, powerful macro-dynamics, and an overall analog liquidity you have to hear to believe. 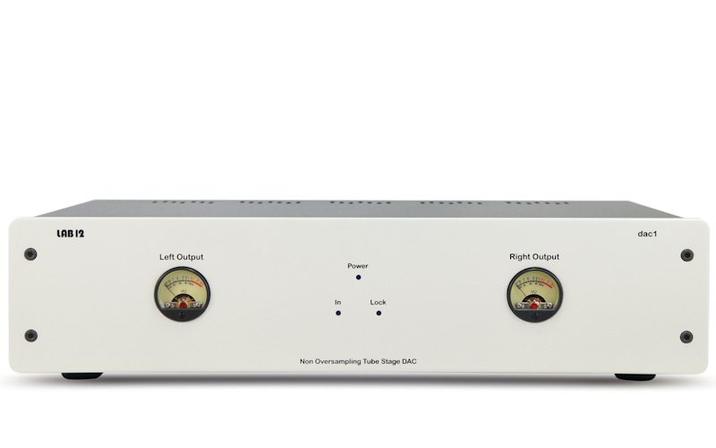 In the last six months, the internet has been abuzz with a handful of rave European reviews for a new DAC (digital to analog converter) from a Greek company called LAB 12. What really sparked my interest in reviewing their DAC1 Special Edition, which retails for $2,250, was that they're using the famous NOS Phillips TDA 1543 DAC chips that, when setup in a non-oversampling circuit, produce some of the most musical and beautiful sound that a digital device can deliver. It also uses a NOS 6922 vacuum tube in its analog conversion circuit.

For over six years now, my reference DAC has been the excellent Concert Fidelity DAC-040BD Vacuum Tube DAC, which retails for $10,000, because it created state-of-the-art digital reproduction as well or better than any other DAC I've installed in my reference system, regardless of price. The DAC-040BD also uses the same NOS Phillips DAC chipset with a no up-sampling or over-sampling.

A salient point to remember is that about 90 percent of the music I listen to was recorded on analog tape and converted to a native Redbook 16-bit/44.1 kHz format. Yes, there are SACD, DSD, and MQA high-resolution formats, and whether they sound better then straight native Redbook is an ongoing debate in high-end audio circles. My experience is that they sound different, not necessarily better, and when I have had DACs in my system that I can up/over-sample to higher bit rates, I find them unpleasant to listen to because they become more detailed in an analytical fashion, wash out the timbres/colors of the instruments, and flatten out the spatial dimensions and air around the individual players.

The Concert Fidelity DAC-040BD uses two of the NOS Phillips DAC chips; the Lab 12 DAC1 Special Edition uses eight of these NOS Phillips DAC chips, in a ladder format that eliminates errors in the digital domain while providing the signature analog character that the TDA1543 DAC chip is known for. For all of the above reasons, I contacted Mike Kay of Audio Archon, located in Libertyville, Illinois, who is the only American retailer for Lab 12 equipment, to get the ball rolling on this review.

The Hookup
The Lab 12 DAC1 SE that was sent to me is black-faced; however, it is available in all sorts of custom colors. The unit weighs 15.5 pounds and its dimensions are four inches high by 15.5 inches wide by 11.5 inches deep. On the front plate in the center is a triangle of red LEDs that indicate that the DAC is on and has input and has locked on a signal. Flanking these LEDs are a pair of very handsome classic analog Nissei VU meters, which accurately monitor the dB output level of each channel. The overall look of the Lab12 is quite attractive in an industrial/high tech fashion.

Around on the back you'll find a pair of RCA analog outputs, a selection switch for either coaxial or USB digital inputs, along with the power receptacle and the on/off power switch. The internal parts are first rate, such as Gold Nichicon capacitors, Janzten Superior Z-Cap coupling capacitors, gold plated RCA Teflon inputs/outputs, and eight of those NOS Phillips TDA1543 DAC chips. I did replace the stock 6922 tube, which brought the performance of the DAC to an even higher level, with a NOS CCA 1962 Siemens. The quality of the parts used and the overall construction are at a high level for this price point.

Performance
This review will mark the third occasion that I was shocked with a new piece of gear in my 40 years of being a dedicated audiophile/music lover and seven years of being a professional reviewer. The Lab12 DAC1 SE completely outperformed on all sonic parameters of my reference DAC, which cost $10,000 more, in a very obvious and easy-to-hear fashion. It's the sort of product that HomeTheaterReview publisher Jerry Del Colliano refers to as a "disruptive AV product," one that so radically snaps the ratio of cost to performance and skews the market to the point that it would be irrational to spend much more money for very little or no gain in performance.


My first selection was Hart, Scone & Albin's new album Leading the British Invasion (Zoho), which consists of jazz covers of historically important English rock and roll/pop music in a B-3 Hammond organ/guitar/drum trio format. This disk is extremely well recorded, with intense overall dynamics and crisp clarity that allows all the nuances of each player to be easily heard through the mix.

The Lab12 DAC1 SE brought the overall macro-dynamics to a level with this music that I had never heard in my system before. The sense of aliveness and the pace, rhythm, and timing made the listening experience extremely exciting and engaging. The noise floor of the Lab12 DAC1 SE was also much lower than the Concert Fidelity, which was very surprising considering that it is battery powered, and it delivered all the micro-details in each player's instruments. The was very extended, but produced with a natural delicacy that just let decays float off into space.


The next selection was the album by two jazz giants, Chet Baker and Bill Evans, The Complete Legendary Sessions (American Jazz Classics). After listening for just a few moments it was very apparent that this DAC rendered their instrument's timbres in a voluptuous and beautiful manner. Many DACs somewhat bleach out tonality compared to what the Lab12 DAC1 SE was doing in my system. A good analogy would be the type of timbres/density of color you get out of a SET 2A3 tube-based amplifier (Lab 12) compared to a solid-state amplifier. My hunch is that those great NOS Phillips DAC chips used in a ladder array, along with the NOS CCA Siemens tube in the analog conversation section, were working their magic in this area.

I wanted to test the Lab12 DAC1 SE's ability to recreate spatial dimensions such as size of a sound-stage, height, width, and depth, along with how precisely it would place different players in that acoustic space. My next selection was Benjamin Britten's Festival Te Deum-Westminster Choir (Chesky Records), which--If a system can produce it--creates a vast wall-to-wall soundstage with each member of the choir placed at the right height, where they are standing left to right, and space/air around and between them. The Concert Fidelity DAC was the king at reproducing this illusion until I put the Lab 12 DAC1 SE into the system. The difference bordered on being amazing. The seven-foot Ulfberht speakers completely disappeared and in all dimensions my room was filled with that choir's members. The three-dimensional imaging and air around each singer was truly breathtaking.


My last selection was Boz Scaggs' Speak Low (Decca) which is a collection of jazz standards done in a semi-pop/rock fashion. The overall quality of this album is quite good.

However, my major reason to use this album was how the Lab12 DAC1 SE reproduced the lowest bass frequencies in terms of extension, tonality, and control. The Ulfberht speakers, with their dual twelve-inch woofers, legitimately go down to around 20 Hz in my room. The Lab12 DAC1 SE was able to reproduce these lowest bass notes with an iron clad grip and pressurize my room to a realistic degree.

The Downside
The only concern I would have with the Lab12 DAC1 SE is that its capabilities are limited to 24bit/96kHz and below. This isn't a significant concern for me given that 90 percent of the music I listen to was released in native Redbook 16 bit/44.1kHz, not SACD, DSD, or MQA. If you believe you have to have the latest and greatest HD audio format, then this DAC would not be for you, but it does cover most of the bases for nearly every audiophile or music lover.

Comparison and Competition
I do not believe there really is any competition for the Lab12 DAC1 SE regarding performance at its $2,250 price point. However, let me share my experiences with three other very highly regarded reference level DACS that lead me to the conclusion that the Lab 12 piece belongs among the highest echelon of DACS on today's market, regardless of price.

In my home system, the Lab12 DAC1 SE was a clear winner over my Concert Fidelity DAC-040BD Vacuum Tube DAC, which retails for $10,000, in every sonic parameter as I mentioned in the body of the review. It was dramatically better in the areas of overall dynamics, transparency, micro-details, and soundstaging.

In another reference level system that I am very familiar with a comparison was made between the Lab12 DAC1 SE and the Berkeley Audio Design Alpha DAC Series 2 MQA, which retails for $19,995, and the Playback Design Dream Player MPS-8, which retails for $25,000, on the same musical selections using a 16bit/44.1kHz sampling rate. I am not stating that the other highly regarded DACS were blown away or totally outperformed by the Lab12 DAC1 SE, but it was at least the sonic equal of both of them and in a blind test I am not sure any listener could really distinguish between the three digital pieces.

Conclusion
Simply put, the Lab 12 DAC1 SE crushes the price-versus-performance ratio in a totally absurd fashion. It delivers beautiful timbres/tonality, powerful macro-dynamics, an overall analog liquidity, holographic imaging, and tremendous soundstage depth and dimensionality at a price that is at least $10,000 less than other highly acclaimed reference DACs. It will not do DSD or MQA, nor PCM higher than 96/24. But if CDs or streaming music comprise the bulk of your listening, as they do mine, you can have world class, reference level digital reproduction for pennies on the dollar as compared with its closes competition. I have purchased the review piece and it is the new reference DAC in my system.