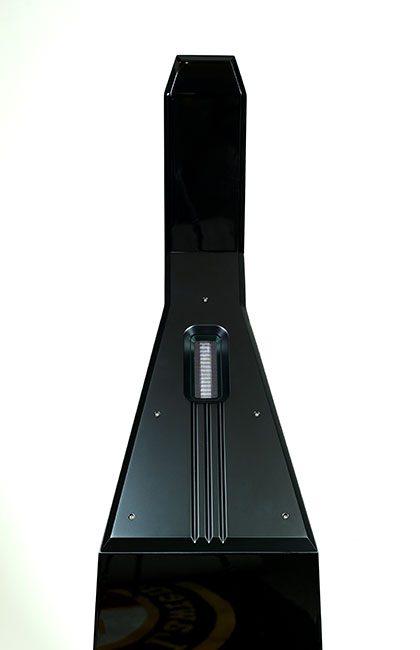 Terry London is always looking for new reference speakers. Will The Lawrence Double Bass Speaker from Lawrence Audio be his next pair? Read on to find out . . . 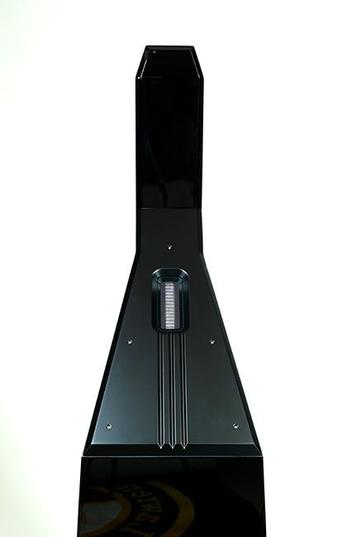 Upon receiving Lawrence Audio's Cello floorstanding speakers about two years ago for review, it was with great pleasure and to my surprise that they turned out to be the finest speakers I have ever listened to in my reference system. As a result, I bought the review pair, replacing the highly regarded MG-20 seven-foot planar speakers that had been my reference speakers for over 15 years, and I have had nothing but musical delight when I sit down to listen to my Lawrence system. Shortly thereafter, I reviewed the smallest member of this part of Lawrence's stable of speakers, which I refer to as the "string section": the Mandolin two-way stand-mount speaker. When compared with the Cellos, the Mandolin speakers also rendered a beautiful musical presentation and deservingly made the HTR Best of the Year product list for 2013.

The string section of the Lawrence Audio speaker line has two things in common. First, they resemble the string instruments for which they are appropriately named: Mandolin, Violin, Cello, and their newest model, the $29,000 Double Bass. Secondly, each speaker uses a combination of ribbon tweeters for the high-end frequencies and as a rear ambient driver, while air motion transformer drivers are used for its midrange. Finally, carbon fiber cone drivers are used for the mid-bass and bass frequencies. After the Double Bass Speaker, the Lawrence speaker lineup no longer resembles a specific musical instrument; instead, each model uses diamond tweeters and a mixture of ceramic and carbon fiber cone drivers. When I was contacted four months ago by Mr. Lawrence Liao, CEO and head designer for Lawrence Audio, to see if HomeTheaterReview.com and I would be interested in being the first in the U.S. to do a formal review of his new model, I happily obliged. Of course, I was quite excited, based on my past experience with the other two Lawrence Audio speakers, and I wanted to find out what possible musical magic Mr. Liao had produced in his much larger Double Bass model. Like my Lawrence Audio Cello speakers, the first thing that one notices about the Double Bass is its exquisite shape that resembles a modern art sculpture. The review pair arrived in one of the finest piano-black lacquer finishes I have ever seen on any speaker. The reason for the Double Bass's physical appearance is purely based on form followed by function. By mimicking the shape of a double bass, all parallel internal baffle surfaces are eliminated, preventing standing acoustic waves. The upper narrow neck of the Double Bass dramatically cuts down the refraction of the midrange and high frequencies, eliminating distortion created from these frequencies being bounced off the front of the wider baffle found in most standard box speakers. Each speaker weighs 115 pounds and measures 55.1 inches high by 13.8 inches wide by 19.7 inches deep. There are five drivers on the front, of which two are 4.7-inch tweeter/midrange air motion transformers. These surround a 2.4-inch purified aluminum ribbon tweeter driver. Finally, there is an 8-inch, non-woven, carbon mid-woofer along with a 12-inch, non-woven carbon bass driver. Each cone driver uses an aluminum frame, a copper-clad aluminum voice coil with flat wire, and a special magnet system with a Faraday ring and demodulation coil. Behind the Double Bass is a rear-firing ambient 4.3-inch aluminum ribbon tweeter, along with four superior-quality WBT connectors for biwiring. The Double Bass is a 4.5-way vented system with the port located on the bottom of the speaker. It has a frequency range of 24 Hz to 40 kHz and a sensitivity of 89 dB with an average impedance of eight ohms and never going lower than 6.4 ohms. Because of its high sensitivity and steady ohm rating, the Double Bass is an easy speaker to drive.

In my reference system, the Double Bass speaker replaced the Cello speaker, having an optimum placement of seven feet off of the front wall, four feet off of the side walls, and eight feet apart with a slight toe-in. My listening chair was located 10 feet away from the front of the speaker. I used my Melody 300b tube-based amplifier, along with high-powered solid-state amplifiers, during the review process.

Click over to Page 2 as the audition begins, plus the High Points, Low Points, Competition and Comparison and Conclusion . . . My auditioning began with jazz singer Lisa Hearn, with her version of "I Heard It Through The Grapevine" from the album I Got It Bad and That Ain't Good (Lisa Hearns Production). Just like the other Lawrence Audio speakers, the Double Bass rendered Ms. Hearn's voice with totally natural timbres and gorgeous tonal colors. With this well-recorded acoustic jazz album, the Double Bass beautifully created the sizing and layering of the soundstage of the original recording studio's environment and setup.

One of my favorite jazz 3B Hammond organ players is "Big" John Patton, who recorded many classic albums on the historical Blue Note record label. His album Understanding (Blue Note Records) is a powerhouse of soul jazz with very robust macro-dynamics coming from Patton's foot pedal ripping bass lines, along with drummer Hugh Walker and his infectious bass drum kicks and snare drum accents. If a speaker is lacking in either speed or dynamic range, this recording will show up its shortcomings in these areas. At very high volume levels, the Double Bass's lower bass frequencies pressurized my large acoustic space without the speaker losing its grip or definition on the organ's bass notes and the drummer's extremely hard-hitting drum shots.

One of my favorite pop albums from last year was Joe Jackson's The Duke (Razor&Tie), which is Mr. Jackson's modern pop/rock interpretation of the great Duke Ellington's most important historical songs. This album demonstrated three additional virtues of the Double Bass. First, it has such a low noise floor that virtually any and all micro-details can be heard effortlessly. Unlike some other speakers that become hyper-detailed and analytical to a fault, the Double Bass stays silky smooth when rendering all the details of the music. Additionally, it produces individual players with great palpability, with air around each instrument. Lastly, the ability of the Double Bass to reproduce the treble range is incredible, with tonal purity and details that never become harsh or unpleasant. Competition and Comparison
There are two speakers in the Lawrence Audio Double Bass speaker's price range that would be its natural competitors: the Sony SS AR1 retailing for $27,000, along with the Wilson Audio Sasha 2 retailing for $27,900. The performance of the Sony SS AR1 is close to the Double Bass in regards to its purity of timbres and natural tonality. However, the Double Bass has far superior soundstaging, low-end extension, micro-details, and maximum volume levels. My first impression when auditioning the Wilson Audio Sasha 2 was that it was a very detailed and dynamic speaker system. However, after a while, it became noticeably exhausting to me because it can be all leading edge with "sharp" details that started to sound analytical and not musical to me. The Wilson speakers tended to cause listening fatigue, something that I have never experienced with the Double Bass. Unlike the Wilson Sasha 2, the Double Bass never loses its liquidity and overall musical presentation, yet it still provides superior dynamics and micro-details.

Conclusion
The Lawrence Audio Double Bass is the third speaker I have reviewed from this company. Each model offers you a "house sound" that revolves around beautiful timbres, resolution/details, world-class soundstaging, and an effortless liquidity and musicality. The Double Bass builds on these sonic virtues and adds the ability to play easily at lease-breaking levels and provide wall-to-wall soundstaging even in a very large acoustic space. Also, if given enough space, it has the ability to produce a taut, powerful, sub-sonic bass foundation to any music or soundtrack to which you might be listening. Unlike many high-end speakers that get to the point of resolution and micro-details where it might seem that you are listening to your music under a microscope and the musicality and emotion in the music is lost, the Double Bass always comes across in a natural way. Precisely worded, the performance of the Double Bass is neither euphonic and romantic nor hyper-analytical. It just sounds like great music. The physical appearance and build quality of the Double Bass allows the superlative level of craftsmanship to be easily seen. If you have high-quality upstream gear to drive the Double Bass and enough room for it to breathe and perform in your listening room, I highly recommend putting the Double Bass on your audition list.