Legacy Audio is going big with the company's newest offering. How big? Forty-two channels of amplification. And there is a lot more than that in this speaker system. This is the doubleHelix. 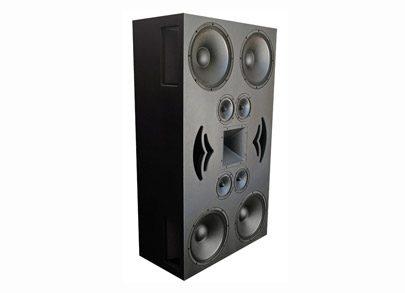 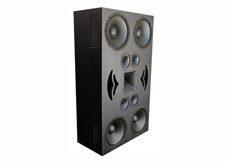 The audio system reaches beyond conventional theaters, and is designed by sound engineer Bill Dudleston of Legacy Audio. It will provide up to 20 steerable sound locations and will be powered by 42 channels of amplification offering 14,000 watts. The system will utilize Dirac room compensating software hosted by the Datasat AP20 digital processor, which compensates for room reflections and provides system crossover and equalization.

The doubleHelix technology was first utilized in a custom system built for legendary record producer L.A. Reid of Epic Records, X-Factor, Arista, UMG fame. The loudspeaker system is unique to this theater installation. It features five 3 x 5 x 1.5 ft Legacy doubleHelix splayed along the seventy foot long platform, located some 30 feet above the floor. The Giant Screen Digital Theater will also exploit 14 surround loudspeakers and an overhead loudspeaker in the shape of an inverted, truncated pyramid that projects sound to all viewers. This speaker will provide continuity in ambience and add drama to flyover effects.

Evolving cinema technologies from studios such as Dreamworks and Pixar are raising the expectations of theater sound. Reacting to this challenge, companies such as Legacy Audio are now providing systems with more channels of playback and more convincing immersion experience.

Each of the five doubleHelix in the front of the theater employs four internal 500 watt ICEpower amplifiers to drive the digitally steered channels. Included in the system are fourteen identical side and rear channel speakers and an exclusive centrally located overhead channel. The overhead speaker is in the shape of a truncated inverted pyramid with separate speaker components on each of the facets. Total system power in the Peoria Riverfront Museum exceeds 14 kilowatts and meets stringent efficiency requirements.